FELLOW FRUGALIST FUNNELS OUR PHILOSOPHY INTO THE EAR OF AMERICA

HURRAY FOR GLEN MORISSETTE!!--- HE TOLD ALL OF AMERICA WHAT IT NEEDED TO HEAR. 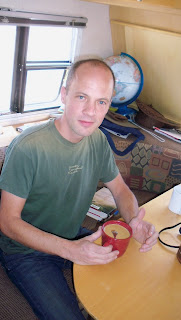 Remember this guy who visited me back in June? 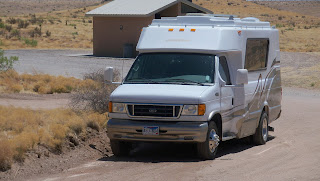 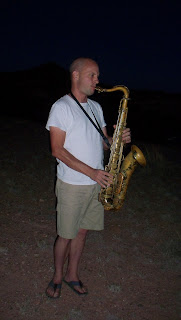 Earns money doing this on the streets of the cities he visits.
And he does much more: HE THINKS----and puts his thoughts in cyberspace---writes a blog:
http://www.tosimplify.net/
About his travels.  And a few thousand read about his adventures.
-----AND THEN ONE DAY-----
He read an article bemoaning the poor wretches who had to live on $22,000.00 a year.
-----WHHHHAT????-----
He said to himself!!
I LIVE LIKE A KING---ON HALF OF THAT!!!
AND SO------
He wrote an e-mail to the author of that article--telling her---just that.
The author wrote back ---asking for an interview---Glenn complied---told his tale
and she published it.
AND THEN----AND THEN
Someone in the National News recognized this gem and published it NATIONALLY on yahoo.
AND THEN----AND THEN
Glen's message of living like a king---frugally--- reached every corner of the earth.
Here's the origional story:
http://money.usnews.com/money/blogs/alpha-consumer/2011/10/19/the-secret-to-living-well-on-11000-a-year

Thousands upon thousands clicked on his blogsite to more fully "catch the drift" of this drifter.
Celebrate with me, sweet people, this earth-circling spread of the gospel of frugality--
How frugality can set you free---to find yourself.
MAY THE FORCE BLESS GLENN MORISSETTE﻿
Posted by Randy at 3:19 PM

Looking forward to meeting the both of you in Quartzsite in a few months.

Despite the naysayers to the story, Glenn will remain strong and endure. So many people think that what we are doing with our little rigs are just jealous, wishing secretly that THEY were doing it too!

The staggering ignorance displayed by all those negative comments is scary. It is as if they are unable to comprehend that there are different paths for people to follow and if no one is being harmed, then there is no issue about the path. The attitude that a path different from their own is a threat to themselves and/or indicates a terrible person is what is disgusting in the comments.

I believe tho, that Glenn has stated that most of his income does not come from busking on the road but rather his career with the entertainment industry that he is able to continue doing from anywhere there is an internet connection. He also clearly states that the money saved is not the reason for the life, but rather a pleasant side effect of it.

While being a nomad is not for everyone, you all have shown that one can have a very good life on little income (or at least, expense) if you step outside the consumption treadmill and focus on what you need and what will make you happy instead. The tiny house movement follows a similar path while not being nomadic.

Another thread of the negative comments was that no woman could possibly be interested in him. Glenn does not talk about that aspect, nor does he need to as that is rather private, but we know there are many couples who happily enjoy the minimalist and nomadic life as well as women.

@glenn -- thanks again for your help in trying to solve the mystery of the missing mountain. :)

@gatorep -- i admit to being quite envious and spend a considerable amount of time dreaming, planning, hoping, researching, looking at vehicles, etc., but i'm no naysayer. [sigh] maybe some day.

Unintended consequences to Glenn's testimony is the corporate state can/will maybe say if he can "live like a king" on 11K, maybe we can persuade others to try half that, say 6K...so the CEOs can pay themselves 500X more than his employees, instead of 400X.

This revelation does not help the income disparities in the USA.
It is interesting timing. Why bring this up now? The old Kodger has been doing it for 30 years. Proselytizing it.

on the other hand, the corporate state may not like it if the masses were to decide to live more simply and reject the unbridled consumption that feeds them.

Michael said...
This comment has been removed by the author.
9:31 PM

I'm kinda curious about the specifics. "High Deductible" insurance 'cause he's self employed.So are we. $10,000 deductible. and it still costs $280 bucks for her. I cancelled mine at $350+, 'cause I was unwilling to participate in that corporate scam. (Greater than 50% of medical costs is INSURANCE)

Pay the insurance company a buck to pay the doctors 50 cents.

If I get sick enough, I die. Guess what happens with insurance? You endure a little longer. Mostly sick and pumped full of chemicals. Your family is bankrupted paying the deductible and the 20% you still have to pay and then? and then? Yes, you die.

He still had to come up with the "High Deductible". Ten grand or so in the bank.

Where is the insurance for $80 bucks? What company?

Tesaje said, "It is as if they are unable to comprehend that there are different paths for people to follow and if no one is being harmed, then there is no issue about the path."

'Live and let live' seems to be a really hard to deal with concept for some people.

What do you think Randy?

Tesaje: "Live and let live" does not imply "and say nothing"---"judge nothing". I believe the world is served when we sound off against ignorance, stupidity, waste-----as well as when we extoll information, reasonableness and efficiency. Now I think I will check out your blog to see what you extoll and sound off about.

I was right!
'Live and let live' IS a really hard to deal with concept for some people.

Randy said, ""Live and let live" does not imply "and say nothing"---"judge nothing"."

And thank goodness for paypal so he can pander via a blog.

Here is the truth:

Humans are pack animals. Social creatures. This will not change for thousands of years because that is how our brains are wired for survival.

This guy will be perceived as a "loser" by the pack as long as he adopts this lifestyle. The realization of this fact is impacting his brain. . . continuously, and despite his seemingly cool and carefree attitude. Why? Because he is a pack mammal deviating from the herd and he knows it.

What is the end result? If he continues to live this nomadic lifestyle, he will die without producing any children and likely by suicide. Because he was not meant to live and carry on in the first place.

This is just my totally raw opinion and I understand if it is removed as innapropriate.

But there is (my version of) the truth.

LOVE the affirmation Glen posted on his blog. Thanks for that! It's a great answer to those who wonder, should I want to explain.

I was reading through some of your other posts and comments. To my knowledge, you can't block a commentor unless they follow your blog. If they do, you can go to the followers list on your dashboard, click on the follower's picture and there is an option to block.

Cyndi & Stumpy @ RVly Ever After