IS THIS A LIFE WELL LIVED?

I INTRODUCE TO YOU A REAL LIVE FOREST GUMP--A SIMPLE GENIUS.  I've known him for 20 years and the feelings I have for him are similar to the feelings I felt for the movie character. I don't think he would be offended by the comparison.  And, like Forest Gump, the effect my friend has had on the world is  way, way disproportionate to his intellect. In fact it is very likely you have seen him on the silver screen in the movie INTO THE WILD--produced by Sean Penn.  Royalty checks still come to him. 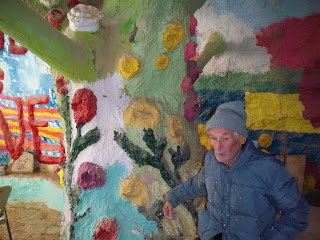 Meet leonard Knight---artist--Christian--a man with a message.
I took this picture one year ago. 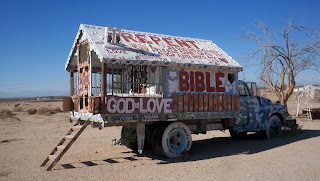 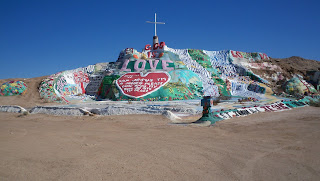 He made this!  It is called Salvation Mountain--located 3 miles east of Niland,Ca.in a very un-scenic desert. 27 years of labor are represented. Tour busses bring the curious to view it. 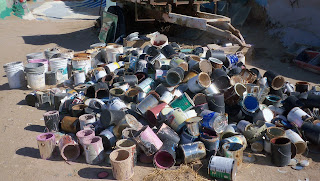 Here are the most recently used-up paint cans.  An estimated 100,000 of them were used in the painted mud art work---all donated by well wishers. 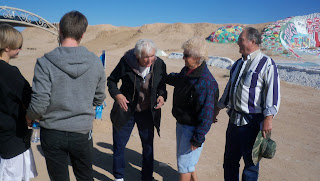 And here he is a few days ago---clearly Leonard is in decline.
Here's the full story: http://www.salvationmountain.us/bio.html 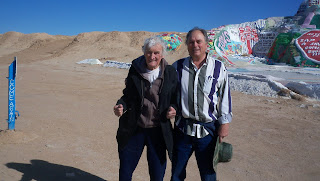 His spirits rise when I sing a song to him---he joins me: "Jesus loves me---this I know---for the Bible tells me so---If I love him when I die---he will take me home on high". I have interviewed him several times over the years. Once I ask him for his religious views.  He said I was the first person who had ever asked.  His theology is heartrendingly simple and childlike:  God loves us---wants us to repent and accept Jesus---and love each other. Little did I suspect that this very day would mark the end of his career----for in the night he was taken to the hospital---diagnosed as incapable of managing his life and will be sent to an El Cajon, Ca nursing home.  Word quickly spread through the Slabs and perhaps around the world. 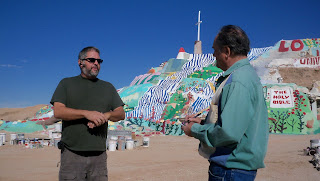 I seize the opportunity to quiz his caretaker Kevin Eubank MSW who protected and befriended the ailing artist these last few years. He told me that Leonard has asperger syndrome--a mild form of autism with the downside of  diminished ability to read social cues (and the host of relational problems that entails) BUT with the upside of a super ability to FOCUS  and PERSIST.  Want to know more? http://en.wikipedia.org/wiki/Asperger_syndrome
I think you may be surprised at the famous people (allegedly) affected--for good and ill-- by it:
http://www.asperger-syndrome.me.uk/people.htm

Leonard came to this spot 27 years ago bringing a giant home-made hot air balloon that he tediously pieced together from scraps-- thinking the desert environment would make inflating it easier--it didn't and eventually that years-long project was abandoned.  He lingered awhile-- long enough to generate another vision---paint his message---GOD IS LOVE-- on the nearby hill---and then plunged headlong into the task FOR THE NEXT 26 YEARS.
RANDY PHILOSOPHIZES:----Is this a life well spent? ---He seemed happy-- told me he was excited each day to work on the mountain----delighted by everyone's support: (people donated equipment, vehicles, paint)--- (the nearby restaurant gave him free meals) ---But he lived a lifetime without intimate friends---or lovers--pushed them away, Kevin said.  I find it interesting that larger minds--(-like Kevins'--- as well as writers, photographers) centered on him--gathered around him at various times for inspiration---just as they did around Forest Gump. Perhaps we are drawn to people not afraid to commit---to something--anything---people who by genetic defect are not troubled by the anxiety of meaninglessness.  We complicated, confused personalities (most of us) might sometimes envy those simple spirits who dive boldly into---anything.  They at least have the courage to dive.  I may well  have dabbled my life away as a dilettante.  I've been discussing the title question for a week now with my friends--I have answered no--- that life is a smorgasbord of infinite dishes and that Leonard stopped--tragically-- at the bread.  But in the end, they persuaded me that the answer is yes--by my own criterion of a good life: RESPONDING TO ONES FASCINATIONS-----WAKING UP ONES CREATIVITY-----SHARING ONES ADVENTURE.  Leonard did these three things and his brain seemingly glowed for a lifetime AND INCIDENTALLY , THE WORLD BEAT A PATH TO HIS DOOR.
Posted by Randy at 3:04 PM

not sure if you know or not, and I hate to be the bearer of bad news, but Kevin Eubanks has passed away unexpectedly....

Sadly, Kevin passed away two days ago. Leonard is in a care facility, but a board is running the Mountain. Hope to get back out there again this winter.

HE created some lovely art for sure...Sorry to hear of all this sad news..

I didn't notice when I took the picture, but Kevin is holding his left arm.
It is a shock he died so young. He just secured new caretakers for the mountain.
Thank you, Kevin.

Thank you for your post - and for all your interesting posts about humanity.
I have always wanted to see Salvation Mountain and meet Kevin. I am so regretful I did not get to meet him. Hopefully I will see Salvation Mountain one day. What a wonderful dedicated life he lived. Thanks for sharing with us.
--Jool

"Judge not, that ye be not judged."

Your friends are right, Randy. He seemed happy, did what he wanted and left something interesting for us to talk about.

I check your blog more often than you update it. Keep up the good work.

Yes, indeed this is a life well lived!
How could anyone question that it is not?
Leonard has enjoyed his life at Salvation Mountain therefore ,nothing else can matter. Also, unlike so many others with ailments he has successfully made a positive impact in his community and the world. He has gained the hearts of so many and multiplied it into others such as Kevin.
This my friend IS to have lived unlike so many of US that are already dead.
CHD

I think that is the wrong question to ask of one who has limited abilities. He lived a life he chose and spent an inordinate amount of effort in proclaiming it. It was probably a good life for him - he succeeded in getting lots of resources from others to sustain him. But what did he accomplish? Very little except to make those who agree with him feel like he was important. He didn't actually help anyone in need. All that paint donated would have paid for quite a few meals ($15-30/can) for people who really need it. It's like praying for someone - you get to feel like you are doing something great for humanity while not actually doing anything at all.

A better question is did he live a life to emulate? No. For the reasons above - he was self-absorbed and fanatic while not helping anyone else. He prompted a lot of people to waste resources on advertisement rather than real charity.
Did he do anything to help humanity or even other people? No, he was the recipient of other's generosity but he himself was ultimately a taker, albeit a peaceful one.

His caretaker, Kevin, contributed his compassion and caring for this poor soul and the world is a little diminished by his passing if only because of the example of his compassion.

Odd to find someone who took from Forrest Gump what I took. I don't know how many times over the years I've read the book and watched the movie, but each time I learn something new about life.

I didn't have the pleasure of knowing Leonard, as you do, and I feel that I missed something important.

May he rest in peace.

I liked your conclusion about Leonard. I enjoyed talking to him and was dismayed that people were stealing from him, but he just seemed to accept it. He was an exceptional man. Thanks for letting us know, Randy.

Leonard is quite alive and doing well in a nursing home and getting a rest he hasn't had in 27 years. He's looking and feeling better than he has in a long time.
It is Kevin, Leonard's 46 year old caretaker, who passed away.
Of course it is a life well lived because he loved what he was doing. He loves that people came to the middle of nowhere -- the middle of the desert -- to see him and his mountain. It gives him great pride and great joy. Anyone who is happy is living well.

@Gracie - You nailed it "anyone who is happy is living well."

Not only was Leonard's life well lived - he created more than just a peace of art - he created and sustained community - the community of Slab City. Leonard's artwork of Salvation Mountain became an icon that gave validity and meaning to the residents and visitors of Slab City. To say he did nothing for humanity is just not correct and is short sighted. A meal for one hungry person helps only that person temporarily, in fact only one time. An icon that can be used as a validation of meaning that helps thousands of people multiple times. I think the Forest Gump analogy is incorrect but that is unimportant. To created art is to create something for humanity - that is a priceless contribution.

I think Leonard deserves to go back to Salvation Mountain, not some pathetic nursing home. I am so sad to learn of his caretaker's passing. Thanks for the blog and post.

Thank you for this post Randy. I had the pleasure of meeting Leonard in 2007 and have been wondering recently how he is. It's odd to think of him living anywhere else but Salvation Mountain, but given his condition it sounds as if this is the best thing for him