THE WONDER OF THE SLABS--PART 1

I AM PREPARED TO SHOW YOU SEVERAL WONDERS OF THE SLABS--BEGINNING WITH ITS FUNDAMENTAL WONDER:  A FREE PLACE TO LIVE.  Perhaps you already know that "Slab City" is a one square mile of desert land three miles east of Niland, California, owned by the state, where "squatting" has been allowed for the past 40 years and seemingly will continue to be allowed.  Here are a few examples of squating: 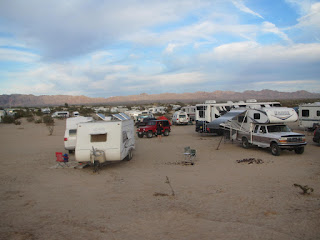 About a hundred of us assembled here to experience the wonders of the slabs--some for the first time. (For me about my 20th visit) 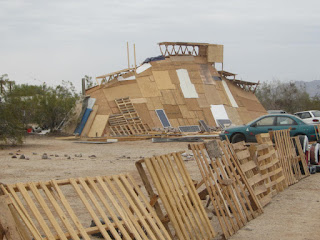 Here's a relatively new a-frame type construction.  Note the pallats wall that defines the territory he or she is claiming. 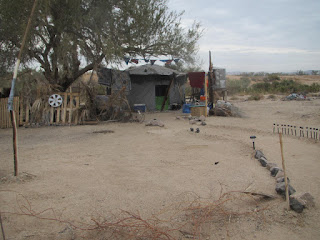 Here's a modest cabin built under a much sought after shade tree. 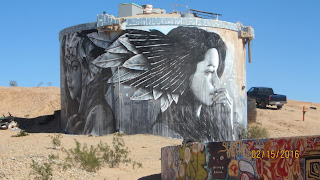 Here is a "home" built into a one time sewage tank.  Don't worry--it's perfectly OK in there as I will show you.  70 years of desert heat will purify anything.  Marvel with me at the quality of the artist that painted this mural. 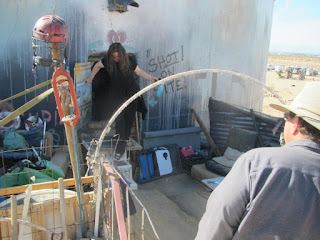 Here's the door that was chiseled through 8 inches of reinforced concrete.. 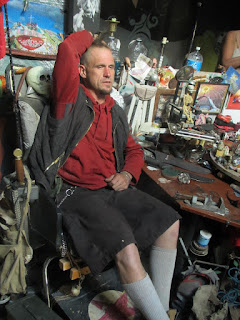 Here's the current occupant that I persuaded to let our group have a look.  He told us amazing stories--such as: that he and his lady walked all the way here from Tucson, Az refusing all rides offered. 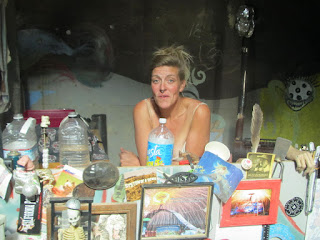 Here is his lady who he said was once his drug counselor.  She was quite amiable. 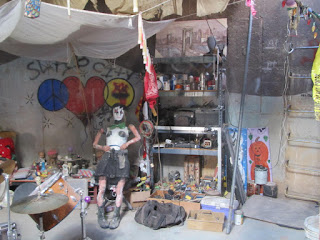 Here's one view of its circular walls.  Don't know what to make of that human-like thing seated there. 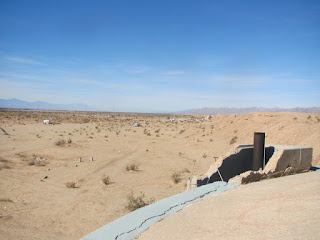 I climbed an internal ladder to the top and took this shot looking North. 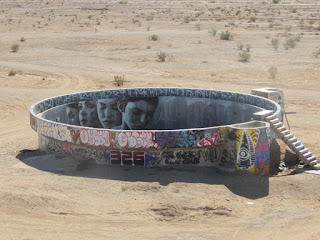 Looking west.  Note the artwork inside the pit. 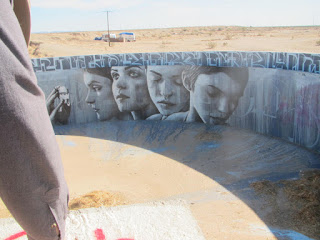 
RANDY PHILOSOPHIZES:  PERHAPS THE GREATEST THIEF OF AMERICAN ENERGY, TIME AND CREATIVITY IS THE COST OF HOUSING.  (about 47% of average take-home pay)
It is an outrageous tax we have imposed on ourselves as our culture drifted into modern housing--which became ever more expensive.  AHHH BUT HERE IS ONE ANTIDOTE---living in the wastelands for free.  More and more of us have "gone mobile" as a strategy to avoid rent and mortgages.  Here is a real live free zone that could serve as a model for other free zones that might spring up outside major cities.  Solar power and modern electronics can give us a good lifestyle living off the grid.  Next I will show the wonder of social life of the slabs.
Posted by Randy at 11:58 AM

Perhaps when the next financial crisis hits, many strip malls and commercial property's parking lots will become empty and abandoned, and free living will be tolerated. Oh sure, litter and poop and thieving will be problems. Still, it is a huge amount of land. It sounds like wishful thinking, but I hope city governments can put that space to creative and constructive use.

“ real live free zone “
Free, you say? Free? Who pays for their food, clothing, water, medical care, etc?
Most likely you and me and millions more tax payers; that’s who.
These people are simply feeding at the government trough.

What happens to their human waste and garbage? I’ve been to the slabs. It’s totally trashed out. Broken glass containers, toilet paper blowing in the wind, piles of discarded trash.

Show some pictures of the rest of the story and not just the romantic side.

Glad your back. Hope to see more from you in the near future. Enjoyed this one, although I have read about the Slabs before, your photos were unique. Happy Days, Martin

Toilet paper blowing in the wind?

Grab it quick! That stuff ain't easy to find out here.

True enough Ed. We were there3 months ago and on one hand found it disgusting. Trash and broken glass everywhere, and people you usually only see on the big city sidewalk living out of their shopping carts,
On the other hand, good for them, finding another place to live by their own devices, at their own pace and off the side walk. Building a space and community for themselves.
And it probably cost the taxpayer less to have them there.
But yes it would be good if more writers showed the whole story, and not just the romantic, flowery side of things

Randy,
I do like the feeling of freedom floating around the Slabs, but I have to agree with the other comments about how trash ridden the place has become.
I suppose there could be a happy compromise between total freedom and total HOA tyranny, but in my view, the Slabs hasn't found it.
Even Salvation Mountain isn't anywhere near the same, since Leonard passed on.
But maybe I've just become one of those old, crotchety guys that complains about the kids not picking up after themselves 😁.

Hawkcreek: You speak the truth, I think, and I agree about the compromise between total freedom and the tyranny of HOAs. I have two comments: 1. There are several areas that are kept clean; most notably the LOW area and other "club" areas like traveling pals, the oasis, the library, solar mikes, the Range theater, ponderosa, viper lounge, and East Jesus among them.
2nd That one day a "personality" will drift into the Slabs and begin a campaign to clean up the trouble spots. I once visited a small Texas town that was nothing to speak of---but one day an artistic, dynamic personality came to town and in time initiated a miraculous "makeover". In a few short years art decorated every street corner, Shakespear was performed at the theater, the town began a festival celebrating its history etc. The guy was a welder
who had vision and "gumption". At the Slabs--"builder Bill"has some of those qualities.

Ed, Carol and Gopher the dog: Thank you for saying exactly the thing to motivate me to rant about the Republican notion that everything should require work to pay for it. Save me some time and read my rant on this issue: http://mobilecodgers.blogspot.com/2016/01/republican-man-finds-salt-mine.html

Randy, I like your hope that someday a "personality" will arrive capable of making some changes to the slabs. Since I am in no way dynamic, I nominate you for the job.
And since I believe that people shouldn't bitch very loud unless they have spent some time trying to fix the problem, I PROMISE I will spend a couple of days collecting trash the next time I am at the Slabs.
People can be a solution as well as a problem.

Hawkcreek: Wow---A "curmudgeon" with a head and a hope and a heart. I might well spend a couple months next winter there and practice some dynamism myself.