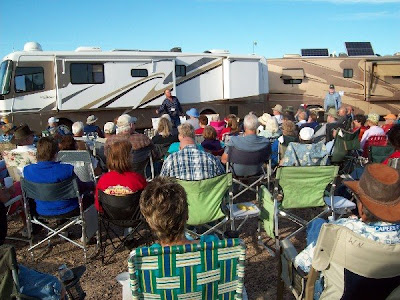 A "focus bringer" is absolutely essential for social cohesion. This day I am quoting from Walt Whitman's "Song of the Open Road." 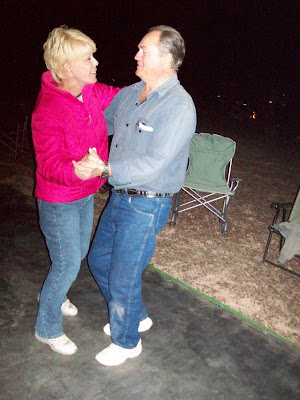 Dancing under the stars 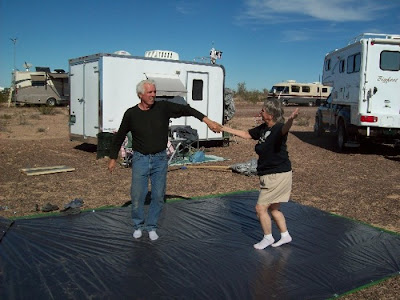 Ron Sinor, inventor of the desert dance floor tests it out with Donna Huffer. It withstood 2 weeks of heavy traffic. 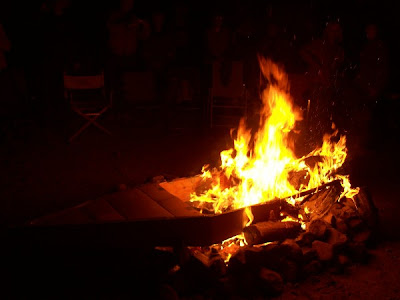 The burning Kayak. Diana has much better coverage of this ceremony in her blogsite: www.lifeontheopenroad.blogspot.com 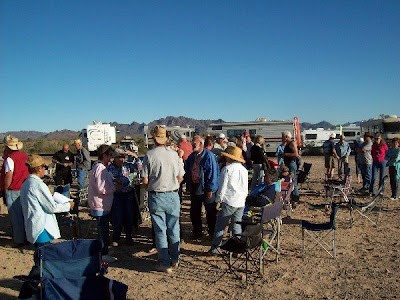 Myself and 6 of my friends decided to tinker with our tribe’s culture–in a big way! With the cooperation of 185 members who attended our Quartzsite, Az gathering, we conducted 7 bold experiments. Amazingly, every one of them was a spectacular success.

1. TEAM HOSTING. Usually one or two people take on the job. This time we split the task 7 ways and found it ridiculously easy.

2. BUILT A DESERT DANCE FLOOR. Yes we did! And for only $70 we engineered a usable smooth surface over the rocks; removing the largest of them, coating with sand, covering with outdoor carpeting and finally securing a taunt tarp over all. Worked like a charm! We danced our boodies off night after night under the stars. Oh so romantic! Our people loved it–we saved a fortune in bar tabs and next year we’ll build a whopper.

3. CONDUCTED A SPEED DATING SESSION. Two long lines of chairs on the desert, —gals and guys face to face—2 minutes each to ask whatever—then on to the next. NO IT’S NOT E-HARMONY scientific matching but it was good enough–fun and enlightening for all.

4. HOSTED A MULTI-GROUP ICE CREAM SOCIAL. Distributed fliers to all singles groups in the area inviting them over. A hundred or so visitors showed up and we mingled in the rain–hopefully spreading good will. A good time was had by all.

5. INVENTED A NEW RITUAL. ‘BURNING KAYAK’ About a third of us carry Kayaks and one whole travel circuit is devoted to kayaking, so we threw out the challenge for someone to build us a sacrificial kayak out of firewood scraps to serve as focus to our ritual. (as in the burning man festival in Nevada) Surprise, a boatright, James, volunteered and astoundingly, had it built in two days; a full sized kayak made of wood and cardboard. Barb and Clair choreographed a new conga line style dance for the ceremony. Then, at the appointed time and to the tune of Proud Mary we danced in a long line in the desert and then round and round the fire as it burned. ABSOLUTELY TERRIFIC–WE ALL GOT LOST IN THE MOMENT.

6. OPENED UP OUR HOMES FOR INSPECTION—RIG TOURS. Those willing, let everyone see the inside of our campers; especially showing off our unique adaptations. The STEALTH TRAILER as always was the object of much curiosity.

7. FORMED AN ISSUES COMMITTEE —to deal with those rare but serious breaches of our code of conduct: RESPONSIBLE, RESPECTFUL, RESPECTABLE.

8. HELD A SADIE HAWKINS DANCE—A minor—frosting on the cake experiment where the ladies were required to do the asking. They got the hang of it quickly and so did we—fun!

RANDY PHILOSOPHIZES: All of us come to consciousness within a particular culture (shared beliefs, values, practices) and live within it like fish within water, hardly noticing it. Visit another culture—go to Mexico or visit the Amish and suddenly you become conscious of your own. Cultures often imprison peoples mind and spirit like Mormonism or Jehovas Witness or Islam. I escaped my fundamentalist Baptist culture and find life incredibly richer for having done so—I never danced till I was 27—a bit of Baptist repression.

My mobile tribe is young and our culture is still forming----a great opportunity to help create a brand-new one. Some years ago I laid out our first camping circuit, a string of short hop gatherings and was delighted that it caught on and is now part of our culture. Another of our members organized a dance rally that also caught on and is an exciting annual fixture. Still another started a kayaking circuit that is now standard.

I’m convinced we can create a culture that fits us rather than adjusting ourselves to it----and that we can do it very quickly. One or more of our experiments at Quartzsite might become part of our culture. How sweet to escape an unsuitable culture and find a suitable one. How double sweet to participate in shaping it!
Posted by Randy at 12:09 PM 1 comment:

A COMET SWEEPS THROUGH MY SOLAR SYSTEM 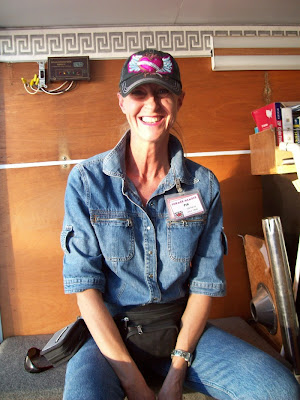 Pia visiting me in my rig. When standing, her head just touches my ceiling. Her name is a shortened derivative from a word meaning "peaceful soul." 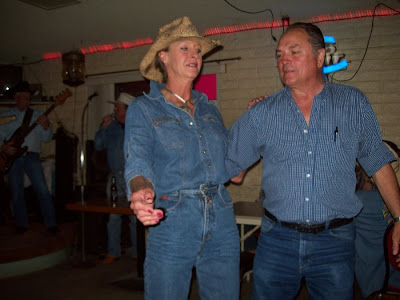 Only I seem to be sweating in the Somewhere Bar, Bouse, Az. Her energy and stamina are legendary--often dancing every dance. 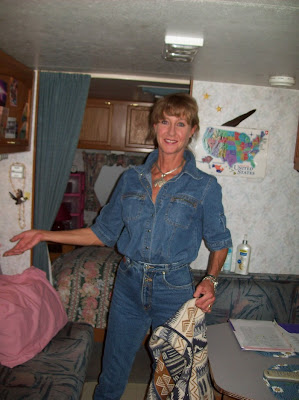 Pia shows off her modest trailer--22ft and cozy. She has no yen for more. 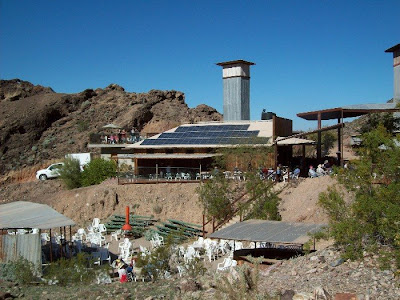 The world famous Desert Bar---remote---solar powered juke joint--open only on the weekends. 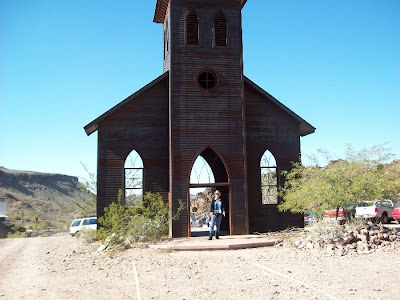 Pia poses reluctantly where couples often marry. It's an odd "church"--no congregation and only one wall---an addendum to the desert bar.

First, a note to my readers: I’ve been busy living! It interferes with writing and vice versa. Here’s my latest adventure.

Now and again you meet someone so sparklingly different that they alter the way you live; like a close passing comet jostles the orbit of a small planet. It’s happened to me these past two weeks.

I’ve had the pleasure of interacting with an exotic, solitary, vagabond lady; so tall her head brushes my ceiling; so slender you think of a racehorse. Her home is Switzerland where she works just long enough to accumulate traveling funds, then returns to the American West for adventure. Flying into Amarillo, Texas, she retrieves her truck and trailer from a good friend in Hartley, Texas who keeps them travel ready, then she is off indulging her whims.

One such whim was to be a cowgirl. Driving up to a remote Nevada ranch, she asked for a chance to be a cowgirl-- and got it—rounded up cattle—she loved it!

To recount more of her exploits would impress you but distract from my purpose. You get the idea—she is daringly bold–and did I mention, stunningly beautiful.

Forget any romantic connection. I quickly grasped that was not in the cards, but somehow she chose to spend time with me–perhaps because I’m a good listener and everyone wants to be understood. (the oracle lady explained that it was because I showed interest in her story) Then again, perhaps its because I too can become wild on the dance floor–as she does. Whatever, I’m grateful.

Here’s a sample of her style: We go for a walk in the desert 7 miles from Quartzsite, Az; On a whim she suggests we walk all the way to town–cross country. My macho kicked in and damned if we didn’d make it cross deep gullies and all. Once there, she’s hungry and orders a two pound megaburger with fries. The waitress suggested she might not be able to eat so much. She simply stood up, unfolding her amazonian frame. The waitress said “OH” and handed in the order. SHE ATE IT ALL!

Another sample of her style: We go to the famous Desert Bar, a converted gold mine, far in the boondocks beyond Parker, Az; the band is playing rock and roll; I release her hands so I can do my solitary wiggles. I think she took it as a challenge–show me what ya got–because she suddenly shifted gears doing a dance I had never seen before; bouncing horse-like, whirling like a ballerina, knifing between other dancers around the full perimeter, rocking in perfect rhythm to the music–as seductive as Salome dancing before Herod–absolutely mesmerizing! Jaws dropped all round. Even the band members were stunned–reluctant to end the song. No one noticed my feeble wiggles–I didn’t care! Like others, my heart expanded to witness such living joy. My friends later joked that she had demonstrated the real “Dance of Testosterone.” (My best known poem)

Another sample of her style: We’re at a dance and she asked me which lady in the crowd I fancied. I indicated a curvy blond trapped, it seemed, by a watchful partner. She immediately broke between them whisking the guy happily away, leaving the lady of my fancy free to dance with me.

Another sample: The scene is the Yacht club, Quartzsite’s primo watering hole. In walks a town big shot with his enterage. He spots the beautiful lady and tells her he will dance with her if she will remove her hat. Barely turning to acknowledge the mogul, she pleasantly responded: “no thanks.” He is so stung by this rare rejection that he leaves immediately. Wealth does not impress her.

I could go on, but you get the idea. This is a different breed of cat that crossed my path. Here is a person blessed with dazzling beauty–even at 50 plus years, strangely unsuited or unwilling for mating, never married, driven it seems to eternal adventuring. She affects all she engages–pleasantly or sometimes painfully as those who grasp at her soon learn.

With those who sense her rhythm, she will dance the dance of the moment. She treats with special respect unlovely people. I watched her engage a bearded outcast, waking up his downcast spirit.

She lives frugally so she may adventure widely; camping alone in the desert. ( Currently a quarter mile distant from others in her modest 22 foot trailer.

I occasionally encounter solitary wandering women such as the one in outlaw canyon. This one is markedly different because she moves toward, not away from the drama of life. She enjoys her body, lives sustainably, responds to her fascinations. She does not claim to have solved life’s mysteries–is not religious–but has an intuitive value system that guides her nicely down the road.

I’ve moved on and so has she, though we remain in contact. I live and dance more spontaneously for having this comet (with a beautiful tail) pass through my orbit. She is living proof of the energy released when we let go of ego, wanting and defensiveness. A master teacher in not clinging or grasping at life’s gifts.....I just flashed on an old poem of mine:
........These pleasures like the waters will
Brush us by then down the hill.
I let them go without delay,
Millions more are on the way.
Posted by Randy at 12:24 PM 6 comments: