FIRST PUPPY OUT OF THE BOX--CELEBRATING DARLENE


WHAT'S IT LIKE HAVING A WHIRLWIND FOR A SISTER?---IT'S EXCITING AND INSPIRATIONAL. 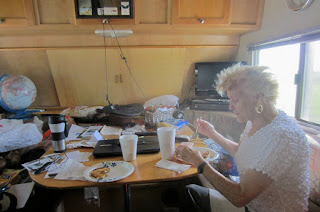 Years often go by before I actually lay eyes on her.  That's why I treasure this picture from my archives because in 2013 we accidently crossed paths in a small town in Louisiana and she had a few minutes to spend with me in my rig.  Here is the great lady herself at my humble table eating something I whipped up. 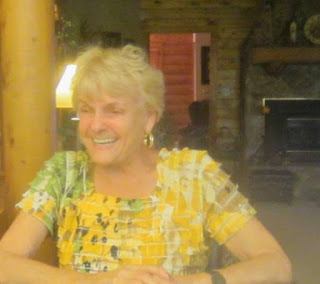 Also from my archives when she was in town to address some group or other.  Her official title is DOCTOR DARLENE because she has a PHD.

I've asked her office to send me some official picts of her.  If they do I will post them.

Today is her birthday---an approriate time to introduce her to my readers.  I will try to give you some sense of her with this poem.

DARLENE:
FIRST PUPPY OUT OF THE BOX

From a litter of puppies you must have seen
that special one, given by nature
an extra measure of spirit; and so
is first to climb out of its box;
daring to go when others stay.

Like that puppy, Darlene was first out of the box.
The whole community saw that it was so!

And there was more: Nature granted her
an extra measure of imagination;
visions of new possibilities.
I have always stood in awe
at the boldness of her actions.

At age 13 she rented a local school building;
produced and starred in
a packed house variety show
that entertained our whole town.
We gladly paid the twenty five cents admission.

For a lifetime she has amused and inspired us
with her enterprises.
Her adventures are legendary
too numerous to recount---
and have spanned the globe!

For a lifetime she has led her friends and family
out of the box: to Jerusalem, Ireland, Australia, Iran;
84 countries in total.
She seduced thousands into her adventures.

Dance was and is her enduring passion,
made most visible in a ballroom setting;

gliding with graceful swirls and energetic snaps;
sexy to this very day.


Obstacles and mishaps have not dampened her spirit.
Moving through them, she stands bold and lively at eighty.

She has been a pioneer for a new ethic of joy;
casting aside drudgery, damnation and dullness.

Were she born to royalty
she could have ruled a great nation.

Personalities that combine Vision with Boldness
likely led humanity down from the trees and out of our caves,
and are our best hope for a happy tomorrow.

KENDRA---LITTLE GIRL WITH A BIG IDEA 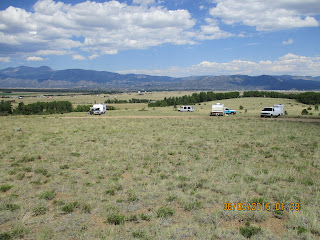 Half of our people selected this new Campsite overlooking Buena Vista--the other half chose a spot along the river below. 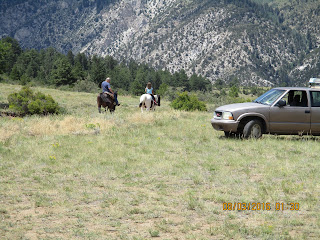 One day two riders clomped by on their way up a mountain. 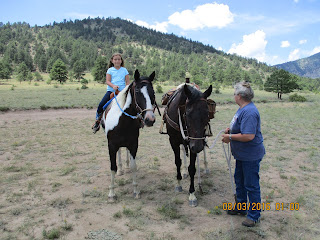 Hours later on their way down, they stopped to chat.
Meet Kendra and Beth--from Missouri and their friendly mounts Jack and Sleepy.
Kendra has not seen the mountains before. 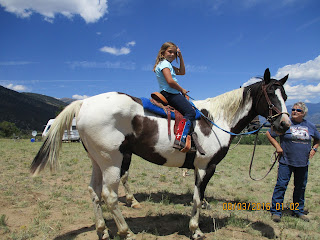 They chatted a long while--answering all our questions about horses and horsemanship.
The big news for me came when they pointed out the unusual bridle both horses were wearing.
If you look closely you can see the big news---NEITHER BRIDLE HAS A BIT IN THE HORSES MOUTH.
You understand don't you that a bit is a  metal crosspiece normally fitted in the back of the horse's
mouth at the tender junction of its lips so that when the reins are pulled,  a firm (if not painful) signal is sent to indicate a right, left or stop message.
Beth is the owner of many horses and  she puts no bits in any of them.  She is teaching Kendra a kinder, gentler way to get obedience.  This spirited little rider told us that a slight pull on either rein could be easily felt by the horse and if the rider has a good relationship with her mount, no pain need be inflicted by a bit.
She demonstrated getting Jack to back up--asking him verbally while pulling back easily on both reins.  Jack walked backward!!

RANDY PHILOSOPHIZES:  OH SWEET PEOPLE--do you get the message----and the metaphor?
FORCE IS NOT NECESSARY TO GET COOPERATION FROM A HORSE.  Maybe affection is enough in most cases.  What a marvelous message to give the world.
I was so impressed--I sat down and celebrated Kendra with a poem:

Come to the mountains and ride Kendra ride,
with grandma Beth by your side Kendra side.
Put some goodies in your pack;
Saddle up sleepy and saddle up Jack;
Swishing their tail as you ride up the trail;
No telling when you two will be back.

How high up will Kendra go?
She might go up as high as the snow;
Clear to the top and look right down
On pretty Buena Vista town,
And a valley so green it's fit for a queen
And the Arkansas river so fun to float down.

Come back Kendra, you're welcome again,
And welcome the pinto with lovely mane.
Ride with courage the pony of time,
Not knowing the future, it's rhythm or rhyme.
With grace and grit ride your horse without bit
Up all mountains you choose to climb.
.