THIS DENTIST SAID NO!  "I WILL NOT PULL THAT TOOTH.  I KNOW IT CAN BE SAVED" 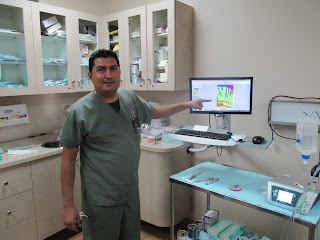 Meet Dr Edgar Rabago DDS surgery and implants, A member of the Rubio Dental group.  I had just asked him to pull one of my teeth that I had given up on--- unremittingly painful after a root canal done in the USA had gone wrong.  After 2 weeks of pain, I was desperate for relief.  Dr Rabago
recommended we save the tooth. 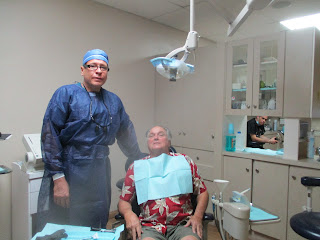 To persuade me, he called in the biggest gun--that's the  famous Dr Carlos Rubio, here suited up for implant surgery, but he took the time to look at the  tooth and agreed that the tooth could and should be saved. 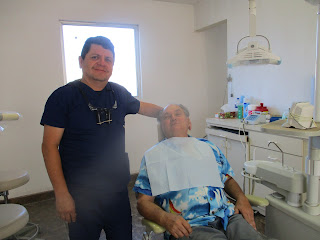 Bright and early next day I'm in the care of Dr. Domingez,  the Rubio team member who specializes in root canals. 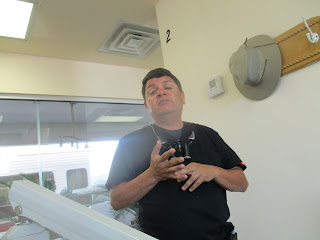 He goes to work on the problem explaining that he will do his utmost to save the tooth. 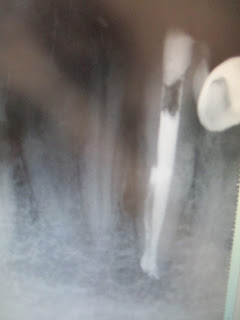 In short order he finds the problem.  Cn you see that light line at the lower part of the tooth.  It's an
anomalous extra canal that occurs occasionally and does not show unless you x-ray the tooth from several angles.  That canal harbors germs and was the reason for the infection and pain.  Dr Dominguez fixed it and Bingo---the pain was gone--THE TOOTH WAS SAVED. 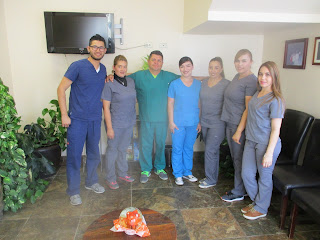 That was 8 months ago.  I went back recently to thank the entire Rubio team for their good work.
This is Dr. Dominguez and crew who kindly posed for this pict.  Need a root canal? this is the guy to see in Algodones Mexico. (across the border from Yuma, AZ.
For appointments call 928-362-0530 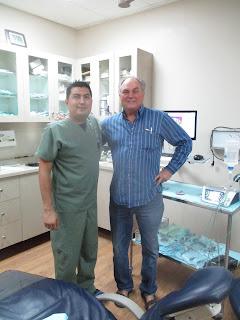 And I went across the street to thank the origional hero --Dr Rabago who said NO--"I won't pull that tooth".
For appointments with him call 928-723-0015 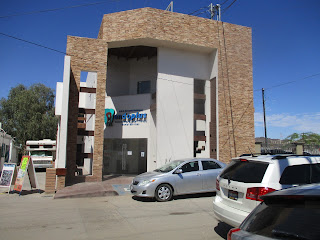 This is Dr Dominguez's office.

RANDY PHILOSOPHIZES:  I saved a lot of money by saving that tooth.  An implant to fill the gap could have cost thousands.  I've been a patient of the Rubio team for many years and have them to thank for the fact that at my advanced age, I have decent teeth.  (including 4 solid implants from Dr Rubio---who has done more than 10, 000 of them)