PEP TALK FOR A NEWBIE

SHE DROVE IN FROM SOMEWHERE!
IS FRESH ON THE ROAD! 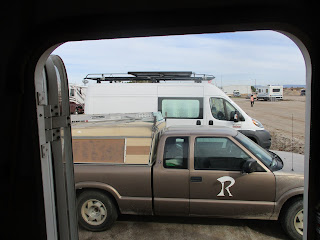 LIVES COMFORTABLY IN THAT VAN---which she engineered herself.
Would be a good story in itself--but I didn't take picts. 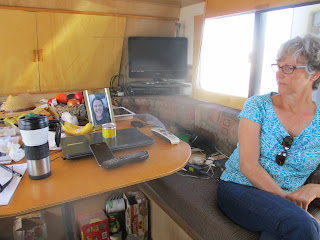 One of those rare individuals who knows how to communicate. (to speak in sentences--not paragraphs--and to listen) 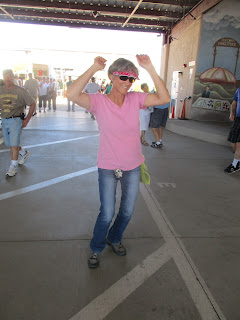 Took her to the flea market--she created a sensation with her dancing. (note that the crowd
backed off --giving her room.  How many people do you know with the boldness to spontaneously dance before a large crowd.  I estimate 200.) 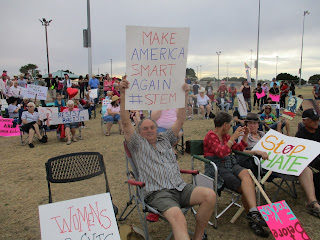 ... took her to a political rally--here's me pushing for education..... 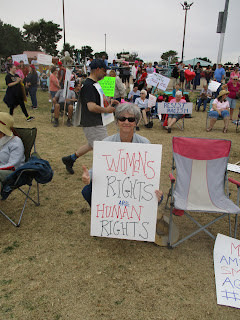 and her for women's rights. 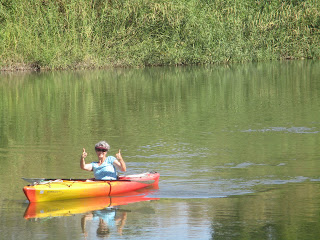 ....facilitated a trip down the Colorado-- 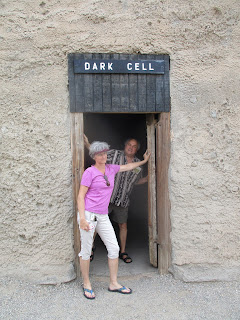 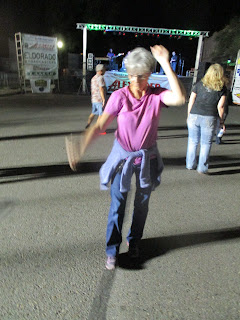 RANDY PHILOSOPHIZES:  SHE NEEDED NO PEP TALK---but I gave one anyway--saluting her ALIVENESS, her careful preparation for road life and her extraordinary WILL in pushing through the fears and hesitations that kill the dreams of so many would-be adventurers.
(" the bright hue of resolution is sicklied o'er by the pale cast of thought and doth lose the name of action--Shakespeare)
Once comfortably on the road, however, the major challenge to us mobile people is how to generate MEANING.  (a feeling of aliveness and purposefulness )
Meaning  is not "discovered"---it is generated
AND HERE IS HOW: click here

SHE WAS TERRIFIC--- SWOOSHED INTO AND OUT OF MY LIFE IN A MATTER OF DAYS--MOBILE PEOPLE ARE LIKE THAT--- SWOOSHERS--WHAT A DELIGHT--WHAT A WAY TO LIVE!

HOW TO POLISH A PERSONALITY

MY SECOND SPEECH TO THE UNITARIANS OF YUMA. 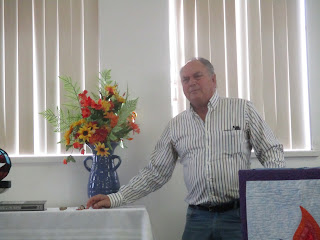 I began by reminding them that Buddha once did a complete sermon by simply handing an object to one of his disciples. No one but that disciple got the message however.  Perhaps I could have better luck. 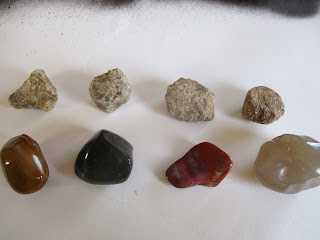 I placed these 8 rocks on a table and invited the whole congregation up for a view---telling them that the heart of my message was illustrated here.
Before continuing, see if you can get the message I want to convey. 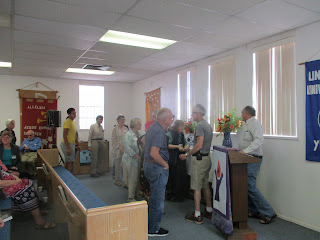 Row by row they all came up, had a look, and returned to their seats.

Then I asked what was the message I wanted to convey. Keep in mind that the title of my speech:
HYPER UNITARIANISM was printed in the order of service.
So how, I asked, do these 8 rocks communicate that message.

One person quickly got my point.  She said :  four of the rocks were much more beautiful than the others and they got that way by tumbling together..  I said "BINGO"
ant then elaborated:

4 OF THESE ROCKS HAVE BEEN THROUGH A PROCESS---THEY HAVE TUMBLED WITH OTHER ROCKS.
Note that they have not lost their essential form--only their roughness.
They feel good to the touch--and if you found one of these it's likely you would take it home.

PEOPLE LIKEWISE ARE POLISHED BY "TUMBLING" --RELATING WITH ONE ANOTHER.
But not just any type of relating will polish a personality.
In fact, some relating, as in prisons, will coarsen a personality.

ONE MUST RELATE WITH AUTHENTICITY.
When people engage with one another, they do so in one of 4 levels:
1. RITUAL:  (hello, how are you--etc)
2. PASTIME: (gossip, current events, car talk, sports etc)
3. WORK. (data exchange--non personal stuff)
4. INTIMACY:  (sharing what you really THINK, WANT, FEEL, HAVE DONE) aka AUTHENTICITY

HOW POLISH HAPPENS
When you engage others with authenticity, you will, from time to time, note a difference  from yourself.
Some of these differences you will admire.
Quietly, often unconsciously, you will absorb that quality--adding it to your personality.

IT'S JUST THAT EASY --THAT'S HOW ROCKS AND PERSONALITIES BECOME BEAUTIFUL.

HYPER UNITARIANISM IS THE SPECIAL POSSIBILITIES OF ENGAGING WITH UNITARIANS.
IMAGINE---TUMBLING WITH PEOPLE WHO HAVE--FOR THE MOST PART--RID THEMSELVES OF SUPERSTITION AND DOCTRINE.
Believing in doctrine is like having mud on your shoes in the dance of life.

WHAT IS UNITARIANISM?
Simply put ---it is Christianity without doctrines.
Doctrines like the trinity (that was the first one we got rid of) origional sin, Hell, The divinity of Jesus, The virgin birth, resurrection of Jesus, infallibility of the bible etc.
Beginning in Transylvania and Poland in the 1600's and spreading around the world--over a period of 300 years, our courageous little denomination dropped all these doctrines, one by one,  Till what was
left was a fellowship of courageous friends focused on VALUES.
Most importantly--we had each other to "dance" with--without the mud.

HERE IS A HAMMERBLOW AGAINST DOCTRINES delivered by commedian Ricky Gervais on the Late Show to Stephen Colbert:  If humanity were to start all over again, the religions that emerged  would be very different  BUT THE SCIENCE THAT EMERGED WOULD BE THE SAME.

WHAT IS HYPER UNITARIANISM?
It is the super fun and super experiences we can have when "tumbling" with authenticity.
In the 1980's for example, a group of us in Tampa Fla began a weekly "tumble" session--a discussion group.  We engaged with authenticity, sharing all sorts of information.  Eventually we decided to do a project---something that had not been done before--to hold a UNITARIAN REVIVAL.  (a revival is a week-long series of services that conventional churches hold occasionally to intensify their commitment, recruit new members and celebrate their fellowship.  usually done for a week or so)
So we held the very first ever Unitarian Revival!
For 5 nights running we packed the church and celebrated Unitarianism and our happy fellowship.
Yours truly was the featured speaker--delivering Unitarian sermons in the style of  a Baptist evangelists.
IT WAS MORE THAN A HIT---LOCAL NEWSPAPERS DID A FULL PAGE SPREAD AND OUR DENOMINATIONAL PAPER PUT US ON THE FRONT PAGE. LATER WE TOOK THE SHOW ON THE ROAD--DOING IT AROUND THE NATION.  NOTE THE HEADLINE. 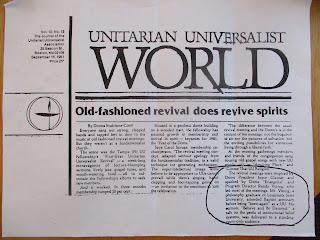 The circled paragraph says: The revival meetings were inspired by Dome President Joyce Glauser and sparked by Dome "Evangelist"  and program director Randy Vining who led most of the meetings.
Joyce Glauser was and is my most important  LIFE MENTOR--still supporting and advising me.
She is the Author of Amazon book:  I'LL BE SEEING YOU.  She wrote the endorsement  on the back of my book: Forty years a nomad. 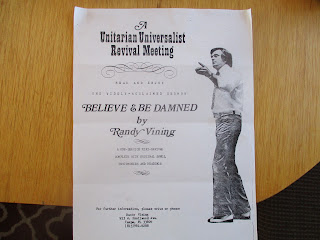 I HAVE SINCE DONE THAT FIERCE SPEECH: BELIEVE AND BE DAMNED more than a hundred times nationwide.  AND IF I GET ENOUGH REQUEST I WILL PRINT IT OUT ON THIS BLOG
WAIT! WAIT!--I'VE ALREADY DONE THAT IN 5 BITE SIZED BITS: CLICK BELOW.

RANDY PHILOSOPHIZES: I BELIEVE THAT ANYWHERE--ANYTIME PEOPLE ENGAGE WITH AUTHENTICITY AND ALIGN THEIR ENERGIES THEY BECOME A FORCE TO BE RECKONED WITH. "ISOLATION IS A DEAD END--THE SELF IS FULFILLED IN COMMUNITY. "  Teilard De Chardin

WHAT IF YOU HAD AN AUDIENCE?

WHAT WOULD YOU SAY? 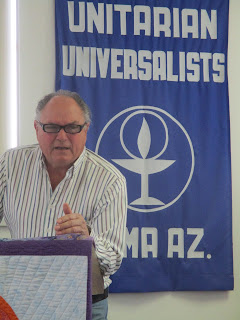 So what could the Mobile Kodger possibly offer to this brainy group?

I ASKED THEM AN HONEST QUESTION:
(An honest question is one that you honestly would like an answer to)

WOULD OUR LIVES BE RICHER WITHOUT  RELIGION?

About 6 of the 7 billion people on earth hold some sort of  religious belief in their head.
(Religious beliefs---all of them--are theories and guesses about the WHY of life)
(Science, by contrast, is concerned with explaining the HOW of life)
Science has done the better job--so far, providing us with evidence-based explanations of how we came to be

HERE , IN SUMMARY IS WHAT SCIENCE HAS REVEALED ABOUT OUR ORIGIN:
1.Beginning with a big bang (that's as far back as we can go) pure energy condensed into matter.
2. Matter aggragated itself into giant balls with such huge pressures inside that fusion took place.
3. Fusion releases  energy contained in matter,lighting up stars by the billions
4. Fusion also complexifies matter from simple to more complex: from simple hydrogen to helium; from helium to lithium, from lithium to beryllium----to boron--to carbon--nitrogen--oxygen and so on up the list of elements. (but interestingly no further than iron--which does not fuse inside a star)
(all heavier elements require the force of an exploding star)
5. When stars explode they thrust their accumulated, more complex matter, out into huge clouds.
6. The clouds eventually becomes a large spiraling disc with spherical lumps of this enriched matter
circling a larger lump in the middle---which lights up as a second generation star--blowing away the cloud--leaving planets circling it--creating a solar system.
7.Just the right mix of elements in just the right circumstance on just the right distanced planet caused life to spring into being.
8. Life evolved, in time, to become ever more intricate and humans appeared.

THIS IS THE CURRENT STATE OF OUR KNOWLEDGE.  We do not know the WHY of our existence.
BUT OUR BIG BRAIN HUNGERS FOR A WHY.

SO MY QUESTION TO THIS BRIGHT AUDIENCE WAS WHETHER WE WOULD, INDIVIDUALLY AND COLLECTIVELY, BE BETTER OFF WITHOUT THE BELIEF SYSTEMS--MERELY STICKING WITH THE HOW?

IS THE HOW -THE SCIENCE STORY THAT WE HAVE EVIDENCE FOR--IS IT  WONDEROUS ENOUGH,  INSPIRING ENOUGH--AND SOLID ENOUGH TO 0BUILD OUR PERSONAL LIVES, OUR ETHICAL SYSTEMS AND OUR NATIONS  UPON?

I threw the question to the audience.  Their response: I estimate about 50/50 YES AND NO.

(My personal recommendation is to build our theories on top of  the science story: speculate away, theorize away--build great movements if you will---BUT BE HUMBLE ENOUGH TO ADMIT THAT YOU ARE SPECULATING AND THEORIZING.   AND FOR (GOD'S) SAKE KEEP TWEAKING YOUR THEORIES AS NEW FACTS ROLL IN.

Believing that you have certainty or access to certainty will eventually turn you into a cruel jerk.

When I get a chance I will summarize my second speech.