Hordes of people are massed at the Guatamalan border with Mexico.  They want to come to the U.S. and find a better life.
If we were to welcome them in, then very shortly another horde would assemble--also wanting to come here for a better life--and so on until we diluted ourselves to third world status.
NO DEMOCRATIC STRATEGIST IN AMERICA SEEMS TO UNDERSTAND THIS FACT.
Democrats, in general are soft and sentimental about this issue and cannot seem to form a coherent and sensible policy to deal with this and similar situations.  I'm here to help.

Democrats are my people--I am a proud Liberal---believing  we hold a vision for a better world.
BUT REGARDING THE ISSUE OF IMMIGRATION, THEY ARE DANGEROUSLY IGNORANT
AND COULD COST US VALUABLE SEATS IN THE UPCOMING ELECTION.

Democrats really would open our borders to unlimited immigration--in a variety of soft hearted policies such as "catch and release".(a misguided Obama policy)

They do this because they take seriously the words on the statue of liberty---"give me your tired, your poor, your huddled masses yearning to be free.  And because they also take seriously our legal policy on sanctuary;  that anyone who shows up and says that they fear for their life at home---that we  are obliged to harbor them--even let them become citizens.

Democrats---my people--will not cleanly admit that billions of people are in danger in their home country and if they could, would show up at our border asking for sanctuary, work, and eventually citizenship.We would be overrun--invaded--overwhelmed---with disasterous consequences.

Republicans understand this better than Democrats and unless we wake up to the threat of immigrant overwhelm, we may lose the great opportunity we have in the upcoming election.

WE NEED A CLEAR IMMIGRATION POLICY THAT WILL TAKE AWAY THE PUBLIC'S FEAR OF BEING INNUNDATED WITH ASYLUM SEEKERS AND BETTER-LIFE SEEKERS.

HERE'S WHAT I SUGGEST:

BOLDLY, VIGOROUSLY, LOUDLY, PERSISTENTLY DECLARE THAT WE DEMOCRATS RECOGNIZE THE DANGER OF BEING OVERRUN----AND WILL DEFINITELY, VIGOROUSLY, FORCEFULLY DEFEND OUR BORDERS AGAINST IT.

DECLARE BOLDLY, VIGOROUSLY AND FORCEFULLY THAT WE WILL FIND A NEW, CREATIVE WAY TO GIVE ASYLUM WITHOUT ALLOWING OURSELVES TO BE OVERRUN BY MILLIONS ARRIVING HERE WITH A STORY OF PERSECUTION.

We could, for example, arrange for a guarded, monitored camps IN THEIR OWN COUNTRY WHERE THEY WOULD BE WELCOMED, DEFENDED, FED AND HOUSED.  The camp would offer security and survival but not a rich life.  Living there would be just boring enough to stimulate their desire to return home as soon as possible..( Such a camp would screen out the "want a better life immigrants") (If you think The U.S. couldn't arrange for such a camp, then you don't  understand the leverage our aid money gives.)(and camps such as described already exist in Jordan--one million Syrians refugees and Bangladesh--500,000 displaced Rohingas)

Republicans by and large are an ignorant and greedy mass that do not grasp the "oneness" of the nation but they do grasp better than the Democrats the threat of immigrant overdilution.

A MAN WITH A GRAND PLAN

I LIKE THE PLAN AND I'M ON BOARD TO PARTICIPATE. 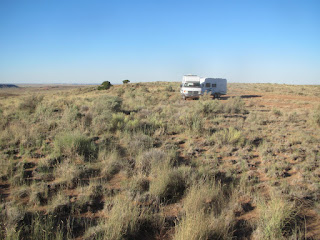 Leaving my oldest friend's place in Santa Fe, I head to a conference near Flagstaff to pull together plans for caravans to begin  November 1st.
Called it a day at exit 346 in Az and drove into the desert for the night.  I liked it so well I stayed 3 days. There are thousands and thousands of beautiful and free places like this to camp. 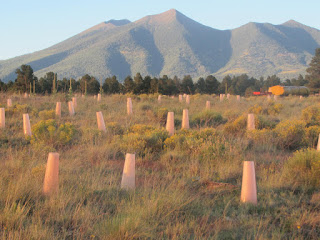 Here's one of my favorite.  I've camped in this meadow several times over the years
with a splendid view of Mt Humphrey (12, 600+ feet), the highest point in Arizona
Those cones are new--they protect freshly planted trees.  Enough sunlite comes through the cone to keep the tree growing. 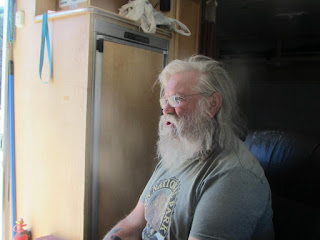 I've come to confer with this man and his support team. Soon, he's seated in my trailer and sharing his vision of how we can set in motion a process to welcome the next million people into a new lifestyle of liberty and frugality. If you think that he is an unlikely guru---consider that he once lived in a van on the streets of Anchorage, Alaska--working full time to support his family.  When that was done, he came south and began to gather folks around him in an annual gathering called RTR (rubber tramp rendezvous)  From a beginning of 8, it grew to about 4000 last January and was featured in the New York Times.
Now he has taken his message of mobility, frugality, efficiency and friendly connection to millions in the form of youtube talks and internet information.
AND P.S. HE STILL LIVES IN A SIMPLE VAN WITH HIS BELOVED DOG CODY.

He reminds me in some ways of this guy who lived in the 5th century BC who came out of nowhere and said valuable things to the world. 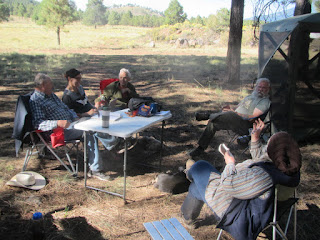 Here's the full crew in conference including KC, Sueanne, Steve and myself with Bob Wells.

We took long walks to refresh our minds.

To see the re3sults of our planning click here

RANDY PHILOSOPHIZES:  I believe that we lose a lot of joy in life by refusing to play other people's games.  I'll happily play Bob's game by leading one of the caravans.  I also embrace his larger vision  that  will provide dollars for larger projects to teach a million people what we already know:
1. That one can live a wonderful life on very little money.
2. That  we can have friends and community while being mobile.
3. That drudgery, stress and waste can be sharply reduced in the mobile lifestyle.
4. That leisure can promote self discovery and creativity.