SHE'S 26---THEY DIDN'T KNOW SHE EXISTED--THEY WANT TO MEET HER---SHE WANTS TO MEET THEM. 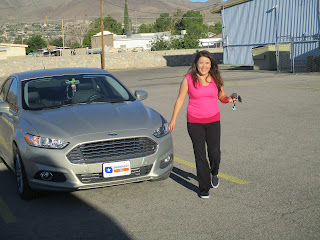 There she is sweet people---A wild oat sown 26 years ago returning to the sower.  She's come to get me and together we will drive to Louisiana where she will meet for the first time half of her biological family: two aunts, oodles of cousins and second cousins. 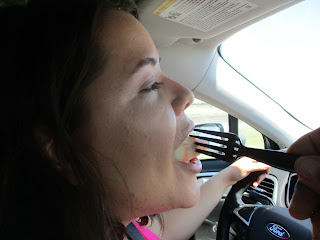 We drive a thousand miles in two days--having lots of fun.  Here i'm feeding her a chunk of pineapple. 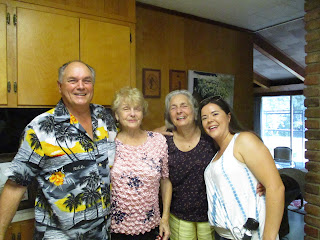 Here is the moment of happy union.  They love her as I do.
That's Darlene to my left--by far the most adventurous member of our family and Bobbie Jean to her left--the lynchpin of a successful and happy clan (as you will see)---and my beautiful daughter Christine to her left. 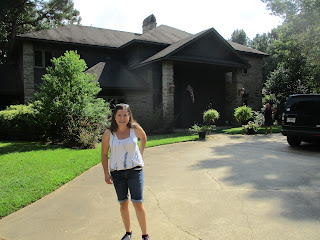 Our first outing is to this house to meet her cousin Donna. 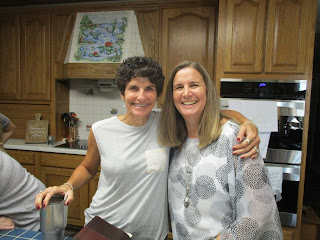 And our timing is good--she meets two of her cousins-- Donna on the left and Alana on the right. (sisters) One of them is a medical doctor and the other once owned and operated a small airline (for real).  Is now director of the visitors bureau for  Monroe and West Monroe-(think Duck Dynasty)-which do you think is which?  Cam you spot a pilot? 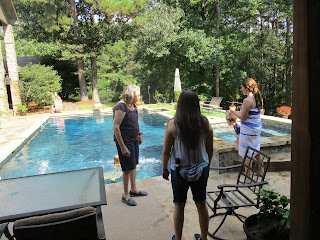 Outside we meet another 2 generations 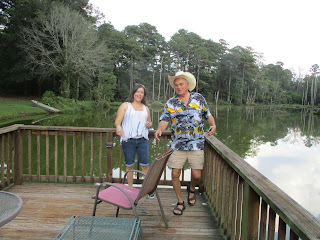 Then we take a break down by the family pond.
So far--so good--she is at ease with her new-found relatives. 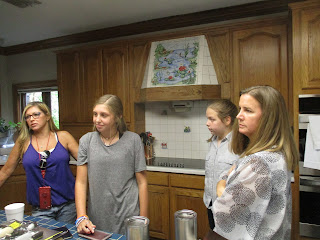 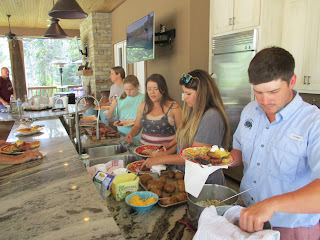 Back for a great dinner, we meet still more relatives. 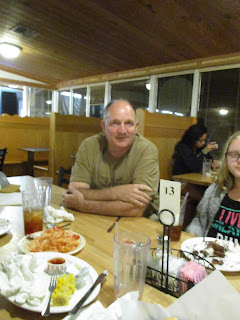 On another day my sister takes the whole family to dinner and I introduce her to a famous in-law:  That's Dr. Clark Cooper who made national news when he spearheaded the successful cloning of a dog.  Read about it here. (interesting story:  Man loves his dog--pays big bucks to have him "back") 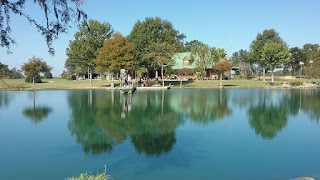 Then on to more relatives.  John Edward and Vicky live here in eastern Louisiana very near the Mississippi river. (no that's not the river--it's their duck pond) 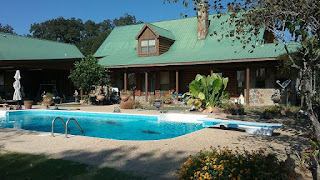 e
Their log home is a marvel of coziness they designed themselves. 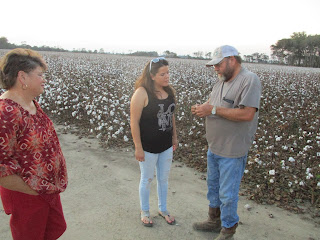 She meets two more cousins! We catch up to Vicky (Asst. DA for the parish) down in the cotton patch with her brother Charles who explains cotton to Christine.   Charles is a super farmer raising cotton and rice.  He has the wit and will to build an empire if he so chose. 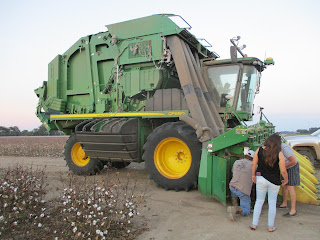 And then he shows her the new machine he just bought--- a six row cotton picker.  Here he details how this ingenious mechanism manages to do the once-thought-impossible task of separating the stubborn cotton fiber from its boll. 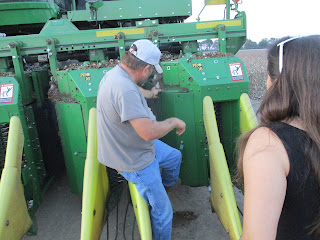 Sweet people you are looking at a miracle machine--for what it does and for the effect it has had.
Partly invented only 13 miles from this spot it does the work of 500 field hands cleanly picking the cotton, rolling it into huge 2000 pound cyllinders neatly wrapped in plastic and dropping them off its rear end.
This machine cost a cool million dollars and I can feel his pride as he watches it smoothly lumber away at brisk walking speed guided perfectly by sattellite.
The effect it has had is to reshape the entire south,putting millions out of work. (and I think that is a good thing---machines should work---people should think: Buckminster Fuller) 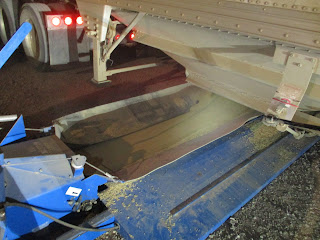 Next we went toCharles' storage bins---giant containers to hold his rice harvest.  Here's a truck just unloading.  You may well buy some of that rice because it has been bought by Uncle Ben's. 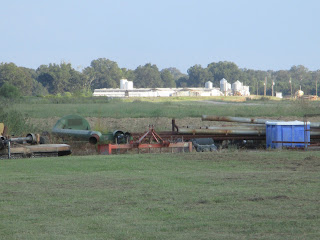 Finally we visited the gator industry owned by another cousin of Christine's.   There are about 40,000 gators being raised there and another 40,000 in a second place.  Taking pictures is strictly forbidden here and elaborate security measures are enforced.  We visited the security room which monitors about everything.  I took her to a single room of gators and carefully opened the door. ...she was strikingly impressed. 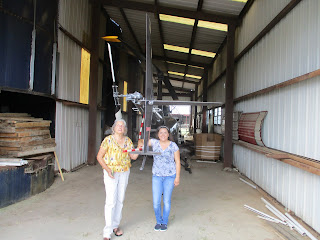 In this barn she inspected his  helicoptor 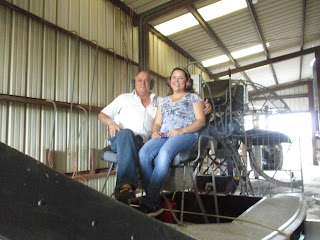 and one of several air boats.
The boss of this giant operation is her first cousin--Jeff--she met him briefly before he was off to Johanisberg, South Africa for an international trade conference. The purpose of which is to find ways to persuade the world that commercializing endangered animals is the most efficient way to save them. (Rhinos for example can--and are--being commercially raised) 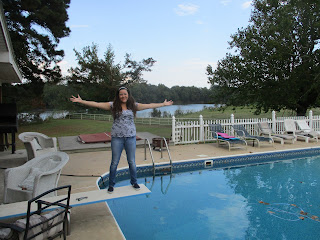 So we enjoyed his private camp and picnic cabins with pool 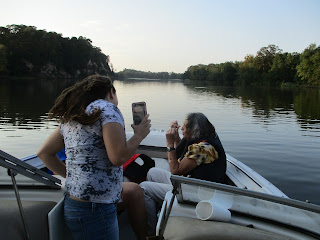 and one of his employees took us for a ride on the lovely Ouachita river. 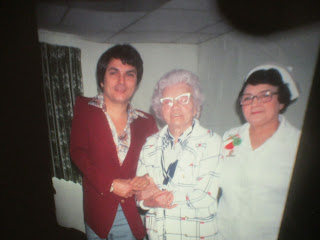 Her cousin Alana invited us over for a photographic walk down memory lane.  Here's my mother and grandmother and myself about 40 years ago.  Christine laughed when she saw this and said she understands why her mother slept with me.

RANDY PHILOSOPHIZES: HERE'S A POEM FROM MY BOOK THAT IS SO TOTALLY APPROPRIATE FOR NOW:

WILD OATS
He never knew he'd sired a daughter
till she was fully grown,
When she sought and found her mysterious father
and claimed him as her own.

Wild oats often return to the sower.
Mostly they bite and stress us.
But now and then, fate, with a grin
returns our oats to bless us.

AND SO I DO---FEEL BLESSED.  This was a mission fraught with some risk;  not least of which is that my glitteringly successful family would make me seem, by comparison, an utter failure.  It didn't seem to happen ---she still seems to love and respect me. I spoke with her a few minutes ago asking for her reaction to the whole trip. She said she feels a sense of completeness that has removed a long-time unrest in her.  She feels  peaceful regarding the gene pool she came from--- that she had finally been "home"--- that loose ends had been tied up.