MYSTERY DOWN A DEAD END ROAD

SEDONA, AZ AREA---JUST DRIVING AROUND IN THE BACK COUNTRY. 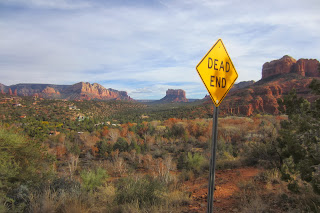 We are intrigued:  What's down this strange road in the middle of nowhere? 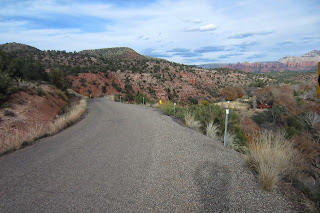 It's one lane and goes steeply down into a canyon. 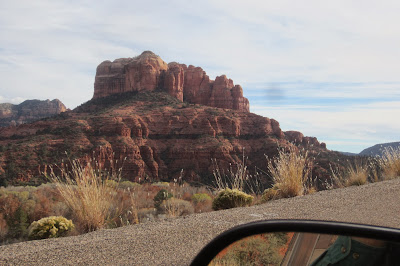 With a lovely view 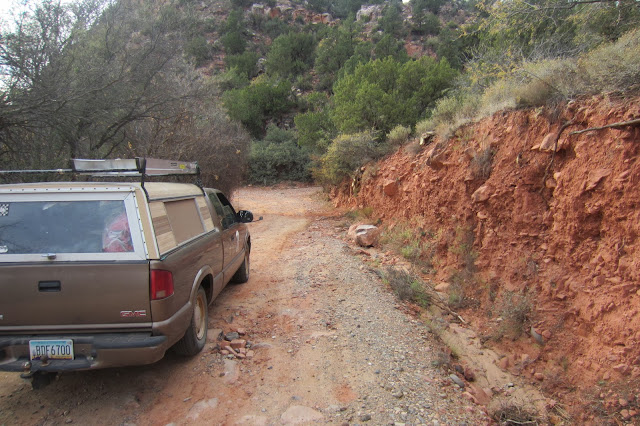 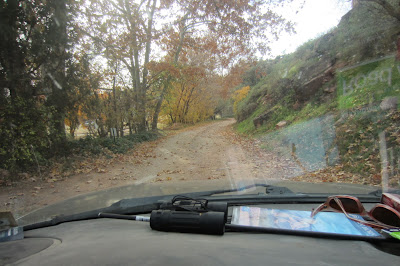 Runs along the edge of a sizable creek---great fall colors. 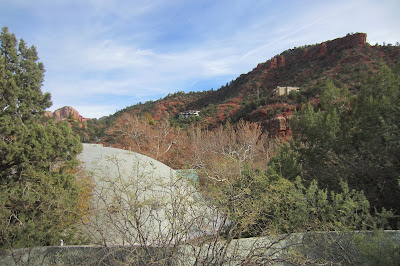 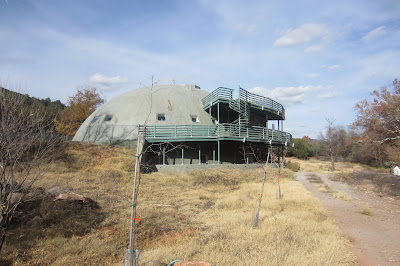 It's abandoned---nary a soul around.  I'm a little hesitant to investigate---Laurie gives me a one sentence lecture: "Life is too short not to be bold!"  So we investigate. 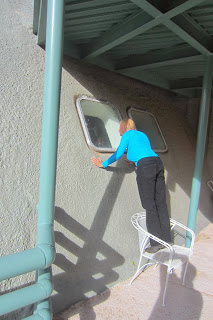 She sees evidence that the dwellers here left suddenly. 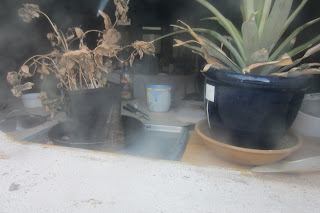 This is what she saw:  a buttered knife suddenly put down---long ago.  Dead plants. 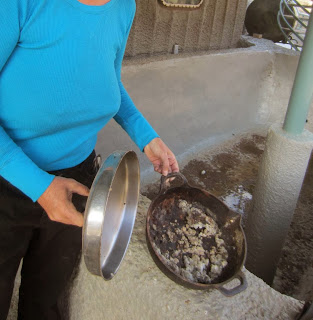 And outside,  a moldy cooked meal just sat down on the edge of a tank. 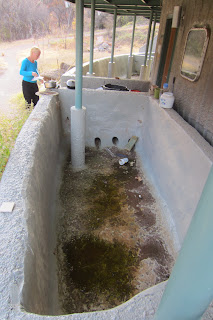 And speaking of tanks---there were several of them flanking the walls of the dome. 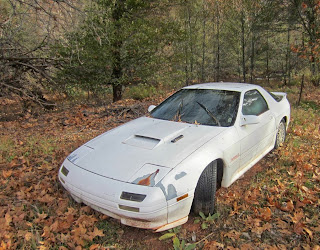 And a seemingly decent car---unmoved in years. 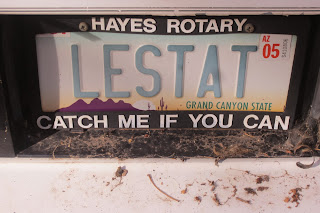 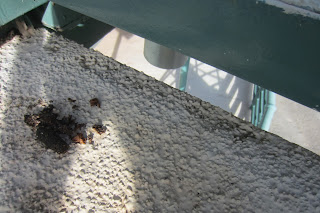 We climbed the spiral staircase to the upper deck----were surprised to find that a coyote had been here--and marked his territory on the top step. 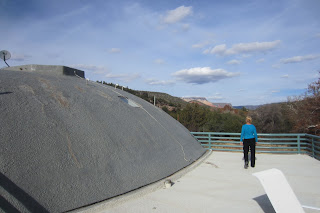 Laurie surveys the scene---notices that rope. 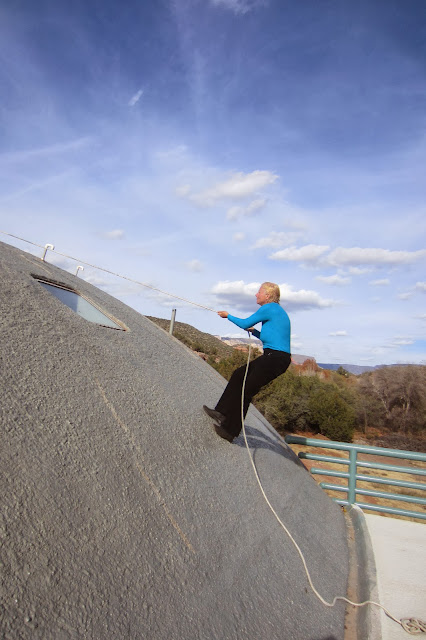 And with no hesitation---does this. 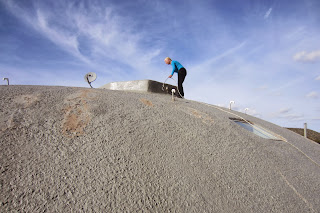 Clear to the top and looks in. 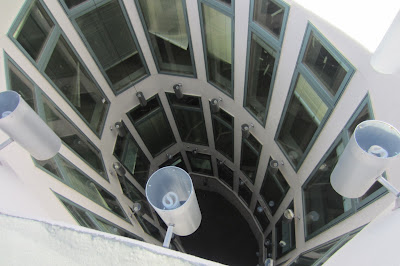 And saw this---a brilliant solution to the need for light in the dome.  Each room has natural light and ventilation. 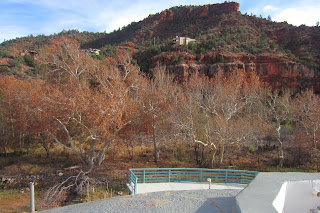 From the top I look across at million dollar homes---wondering how they access them.
A sizable creek runs down the canyon. 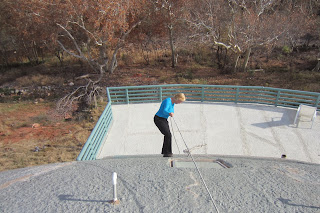 RANDY PHILOSOPHIZES:  Bold people sometimes need to drag us along into adventure as Laurie dragged me this day.  What a splendid mystery is this giant dome.  Housing for many---beautifully engineered.  Clearly an "enterprise of great pith and moment---gone  awry".  My mind flashed on the famous mystery of the Mary Celeste--an intact ship found floating off Spain with no one aboard.  Evidence here suggested a sudden departure during breakfast.  Perhaps a reader knows what happened here?  Perhaps I will inquire further.

MEET THE KING OF FRUGALITY---HE WILL SHOW THE WAY 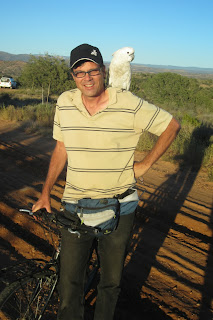 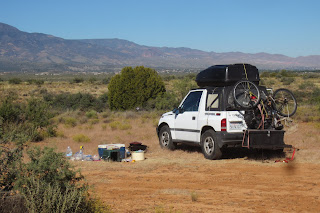 He and his faithful coc-a-too live in this vehicle. 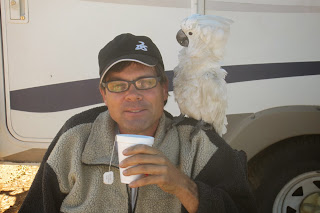 The bird is as free as the man---allowed to fly wherever it wishes---but comes back often to its favorite perch. 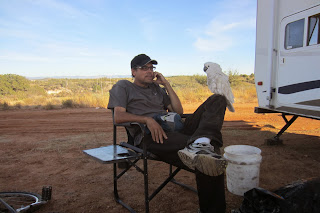 I strike up an acquaintance and we begin walking and talking daily. 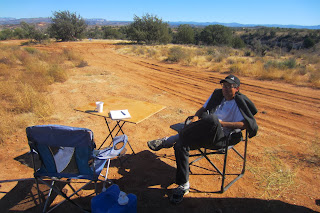 Leaving day and I ask for a formal interview.  He agrees.  Here's what I learned:
He is a college graduate---age 54---an engineer---worked a number of years as a draftsman.  Job expired---couldn't find another---began living in his car to avoid rent---has lived this way for several years---has come to like it.
Enjoys the game of frugality---says he could live on $150 a month if necessary.  He gets $200 a month from the government for food---that is more than enough---he could feed himself and bird on $100 if spent well.  Visits food co-ops and other organizations selling damaged and expired goods at bargain prices.
Spends about $100 a month for gas---has now saved up $700 for emergencies.
Is happy and healthy (says about 7 on a scale of 10)---has a tiny internet business selling one of his inventions on e-bay----nets about $150 a month.
Feels passionately about freedom, efficiency, invention---takes Mcguiver as a role model----hopes to upgrade his living arrangements to a van---leans politically right--is biblically religious---describes himself as eccentric without being weird.
I enjoyed his company on long walks---was often startled when his avian companion
would whoosh upon us---settling on his shoulder.
RANDY PHILOSOPHIZES: Here is a man quietly and efficiently making his way in the world.  He has shaped a life for himself---enjoys freedom and does not suffer anxiety about tomorrow.   He travels the LOW ROAD with easy grace.
AND YOU COULD TOO!! This very day millions of you could be free---on the low road---wake up when you wish and fill your day with adventures.  The Low Road awaits all with the courage to travel it.  (as Walt Whitman says) "it is not far---it is within reach---perhaps you have been on it since you were born and did not know---perhaps it is everywhere--on water and on land.   Shoulder your duds and I will mine and let us hasten forth----wonderful cities and free nations shall we fetch as we go---for after we start, we never lie by again" (Song of the Open Road)
Posted by Randy at 4:24 PM 17 comments: