I AM ABOUT TO SHOW YOU SOME OF THE FREEST PEOPLE ON EARTH. THEY ARE:

The sprouting seed of a brand-new breed
Living simple and light and lean;
Living happy and free like wild Cherokee
In cozy little living machines.

Choosing sunlight's glow over ice and snow;
acceptance over sorrow;
adventurous games over riches and fame;
and today over iffy tomorrow. 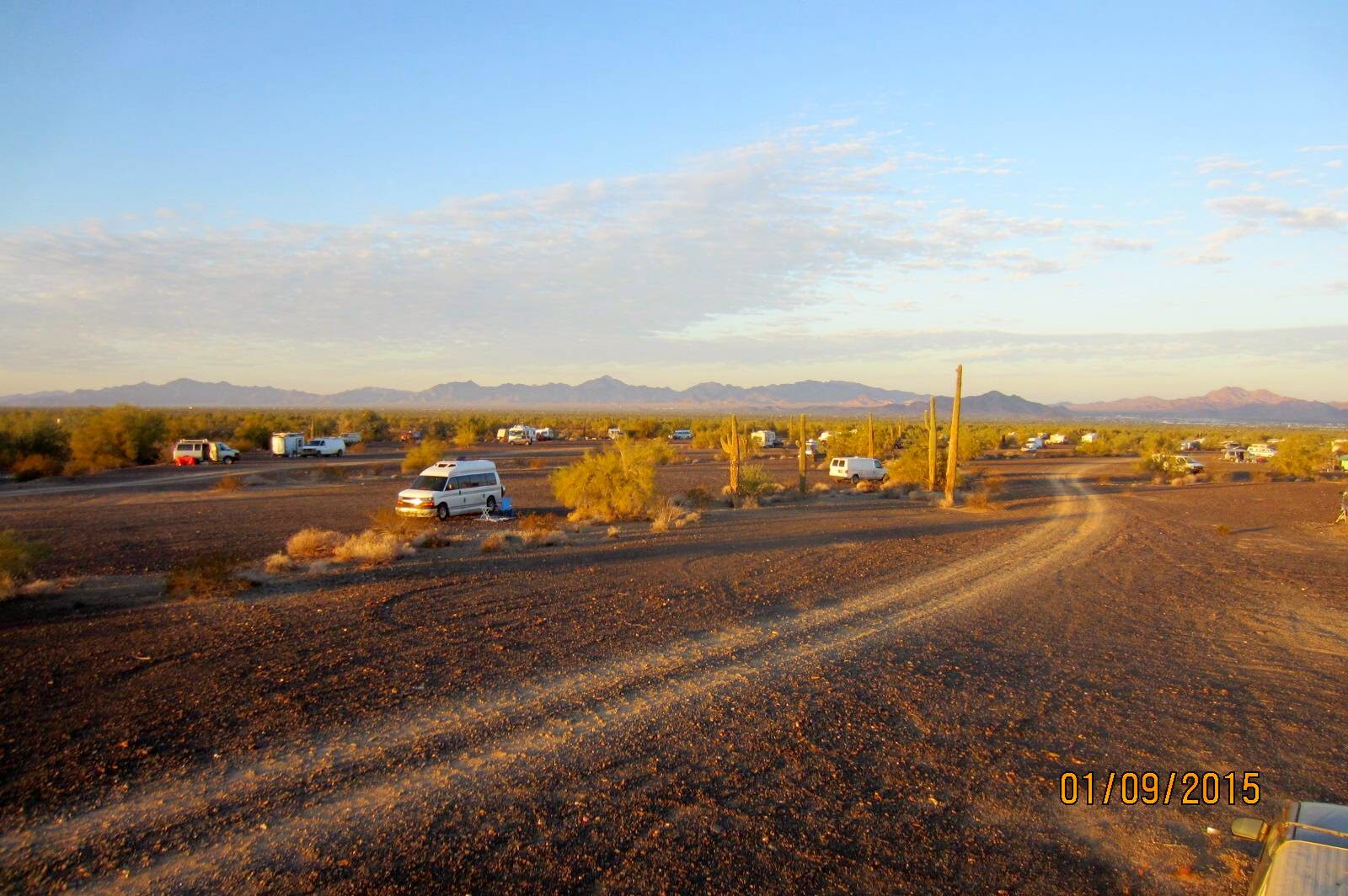 Here they are---scattered across the desert in their "cozy little living machines".
Each year they heed the call to assemble with their kind outside Quartzsite, Arizona. 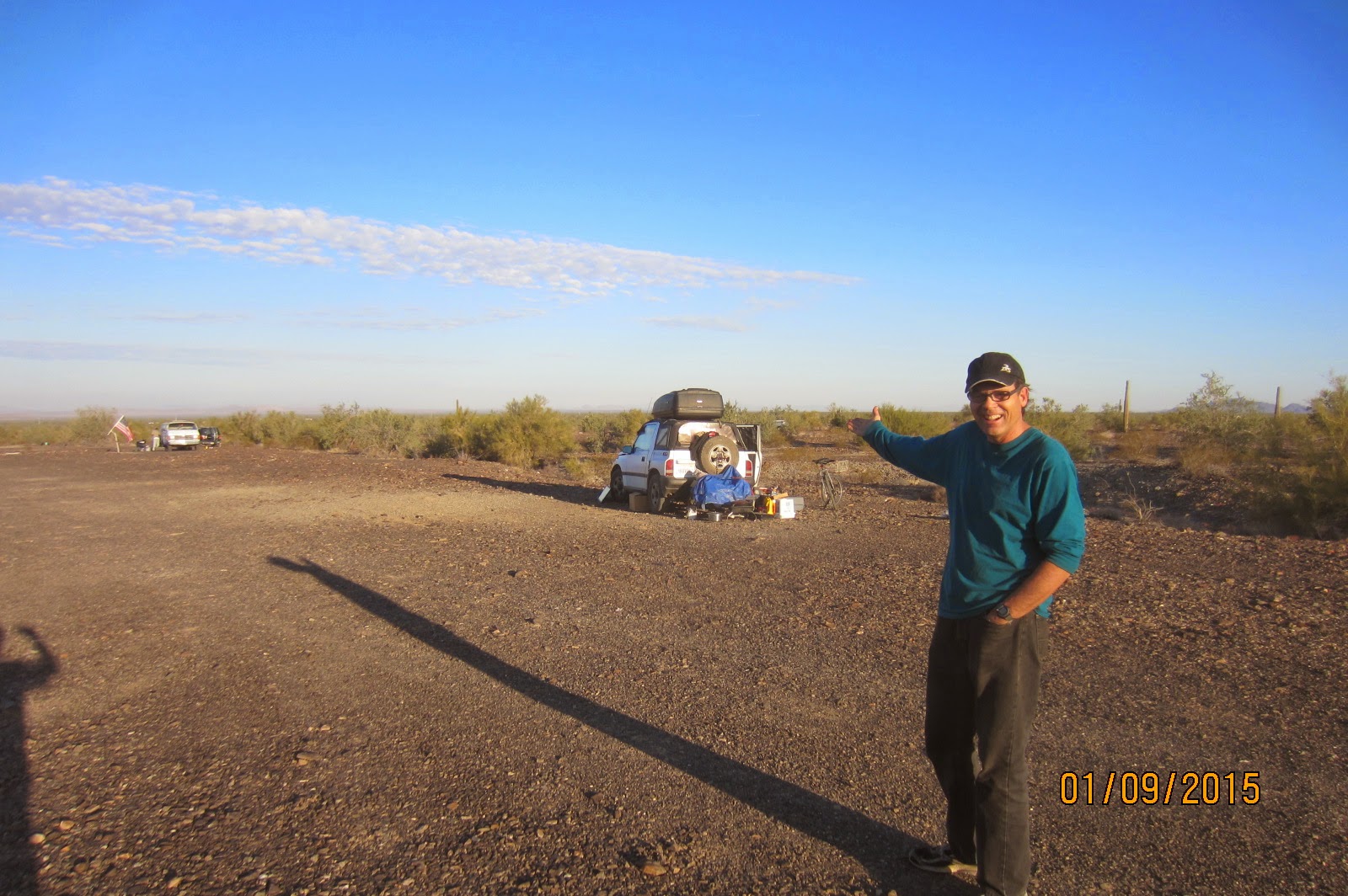 Some live super simple lives like my friend Dave who comfortably camps  in his car. 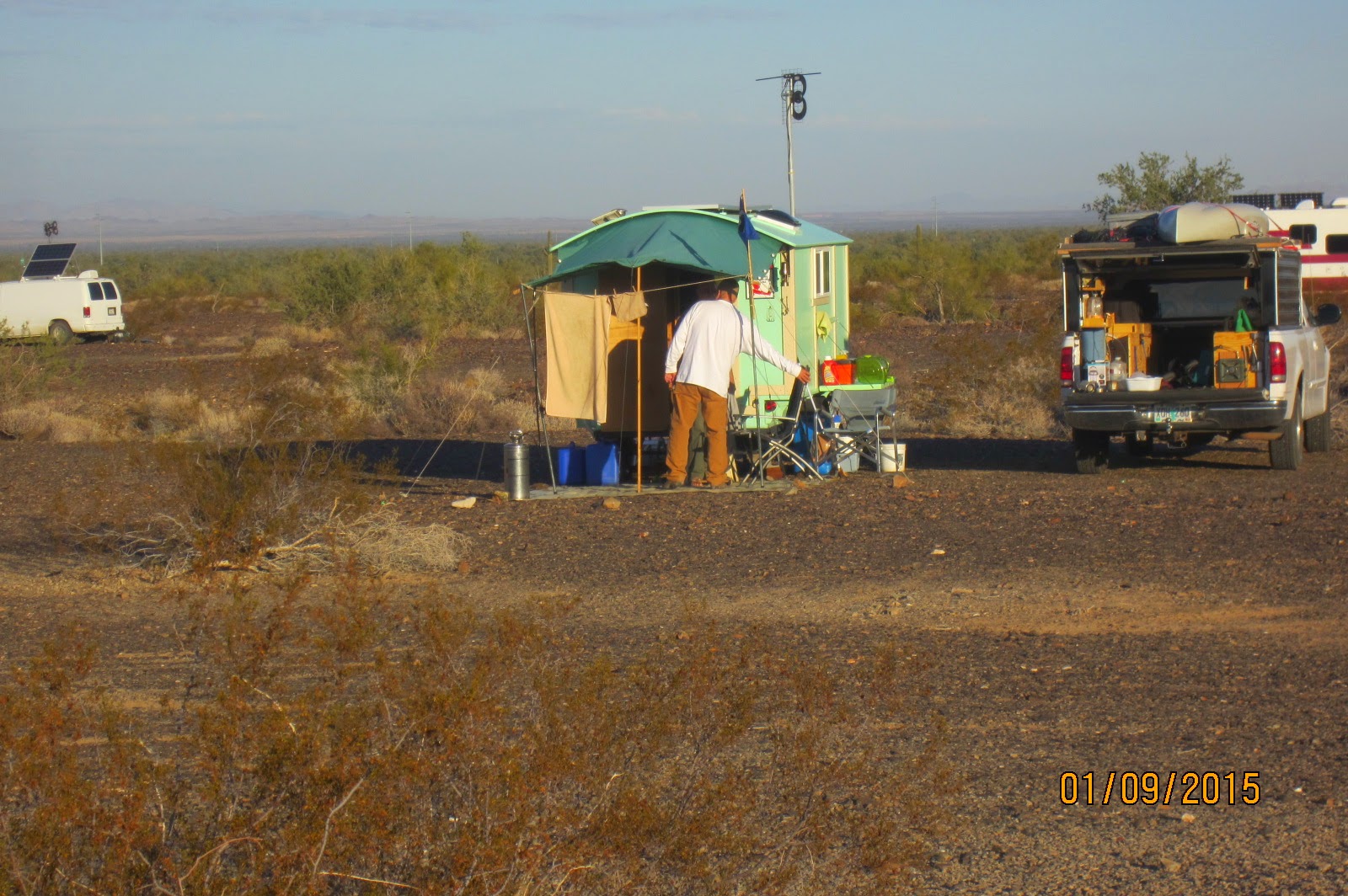 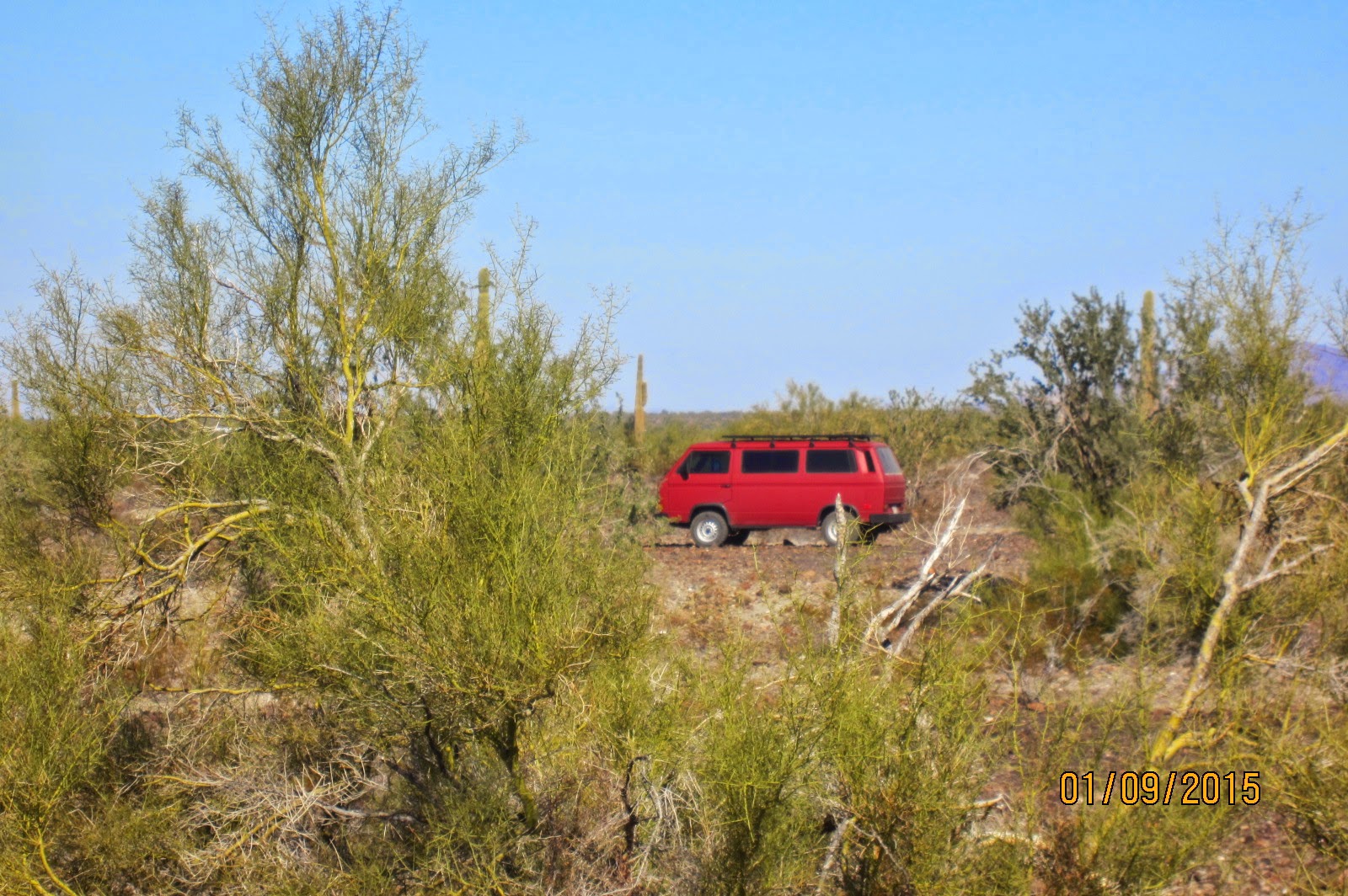 Camped to my right is a very familiar rig---the super van renovated by Mr simplicity himself Glenn Morrissette. 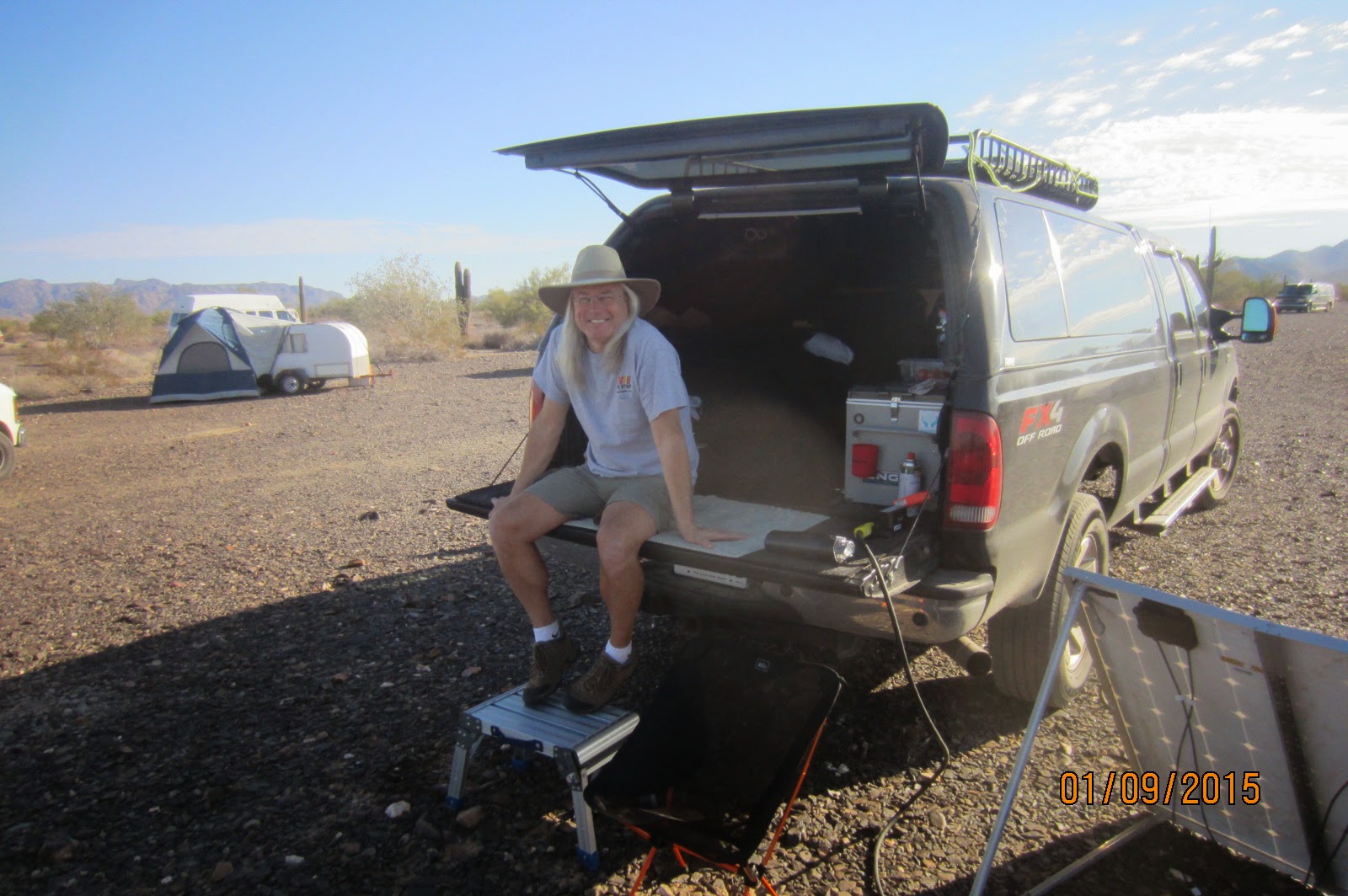 And all the way from Atlanta, Ga my old friend CB.  The electronics and engineering in the back of his vehicle would amaze you.  He owns a mighty Airstream trailer but can live comfortably and zip about the country in this vehicle. 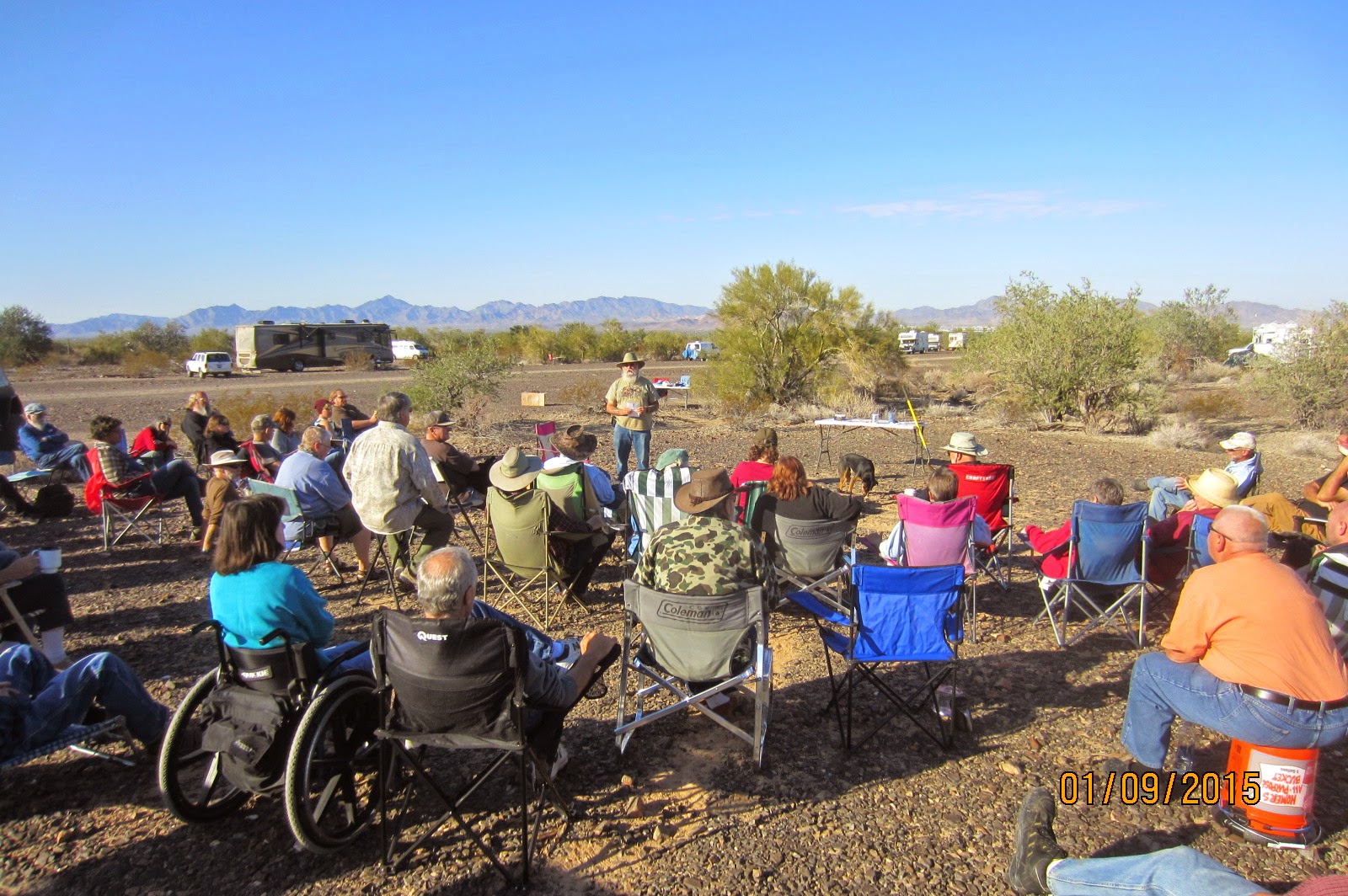 The highlight of every morning is the seminar---on a different subject each day.  This one is being led by our host Bob Wells.  Bob is the founder of this RTR (Rubber Tramp Rendezvous). It seemingly doubles in size each year.  About a hundred attended this year. 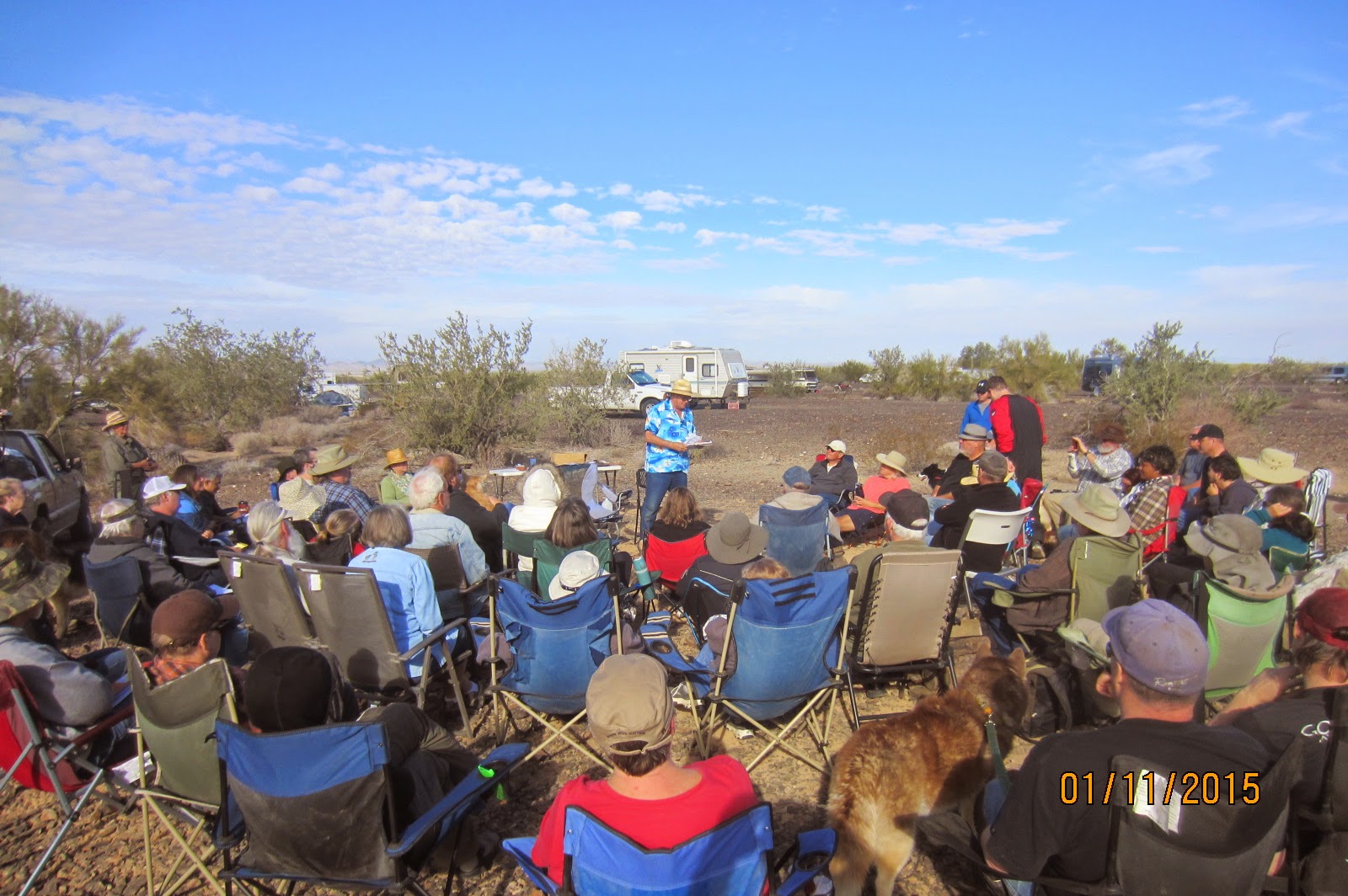 This is yours truly leading a seminar called tin can discussion. Where anonymous questions deposited in a can are read--then responded to by ---whomever wishes to. 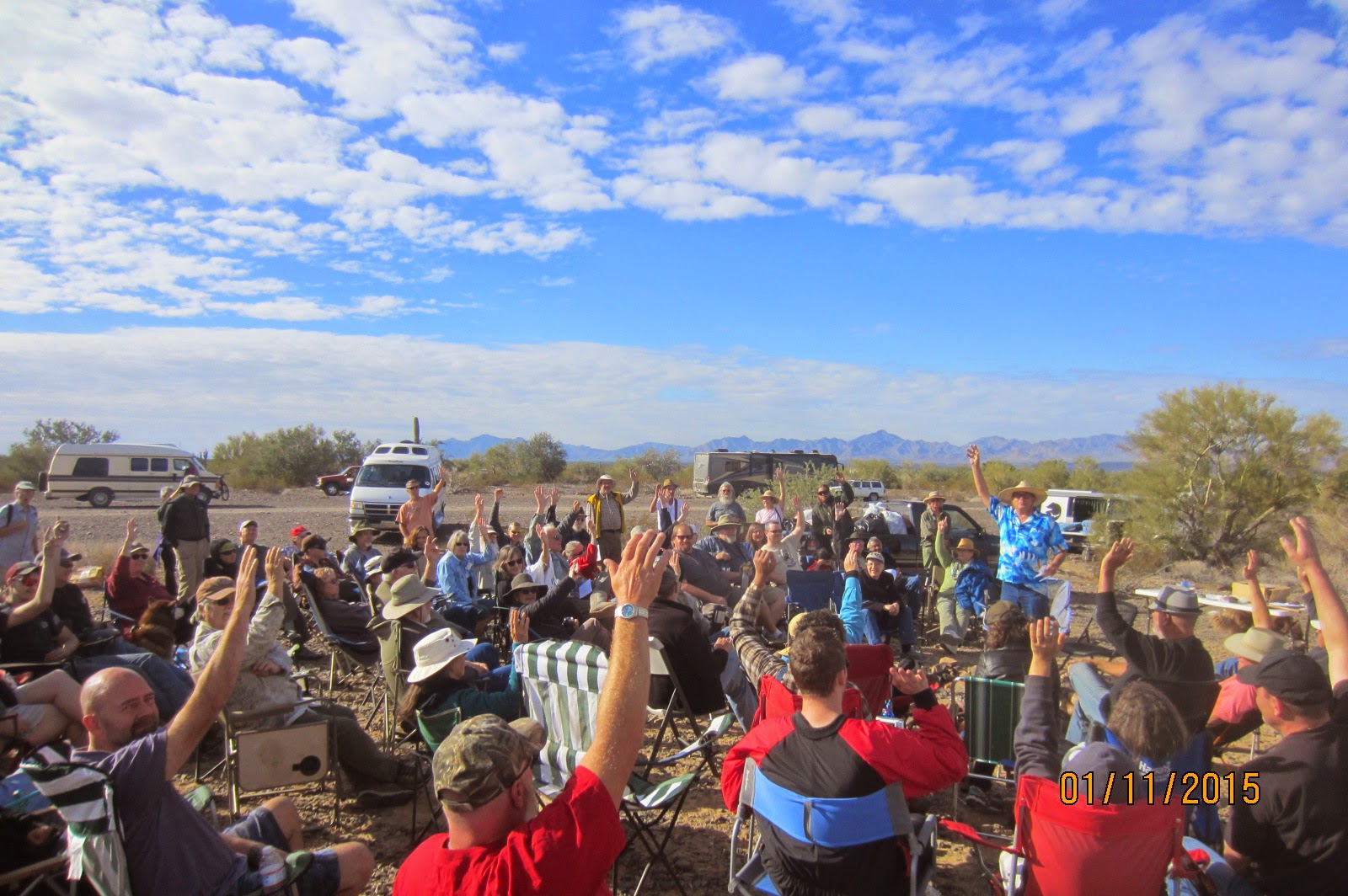 Here the audience is responding by show of hands to the question:  How many know who Henry David Thoreau was.  I daresay most of us have been inspired by his book: Walden Pond to win our freedom with simplicity and frugality.

RANDY PHILOSOPHIZES:  I think I will let one of my poems philosophize for me.
A FULL SET OF STUFF

I travel full time with a full set of stuff;
Not less than I need or more than enough;
All safely-stashed within easy reach,
Ready for desert or forest or beach.

I have food, fuel, a good fly swatter,
Stove, fridge and plenty of water,
A potty, skillet, four kinds of soap,
A swiss army knife, a strong tow rope,

A satellite dish, a good TV,
Tools for any contingency,
Cleaning supplies, things for the bed,
Sunglasses, towels, needle and thread,

A mirror, medicine, compass and maps,
Scissors, twine and two mouse traps,
A shovel, sandpaper, a nice towed car,
A clock, some cards, a VCR,

Well, you get my point; this full set of stuff
Is all I need to smooth the rough;
I can cook, eat, wash my hair,
Watch TV or make repair.

I can sleep, bathe, read or dig
With just the stuff in this small rig.
Where tourists gaze and rush away,
This traveler parks and stays the day.

Down back roads by lazy brooks
I take a nap or read my books;
Chase the wind, drift and roam;
Let night overtake me everywhere home;

Live my life in a thousand places;
Share myself with a thousand faces;
Drink-in life till I've had enough;
Thanks to my rig and a full set of stuff.

THE UNITARIAN CHURCH OF YUMA INVITED ME TO SPEAK LAST SUNDAY ON WHATEVER SUBJECT INTERESTED ME.  I chose as my title: WHAT HEALTHY PERSONALITIES  LOOK LIKE----AND HOW THEY ARE GROWN. 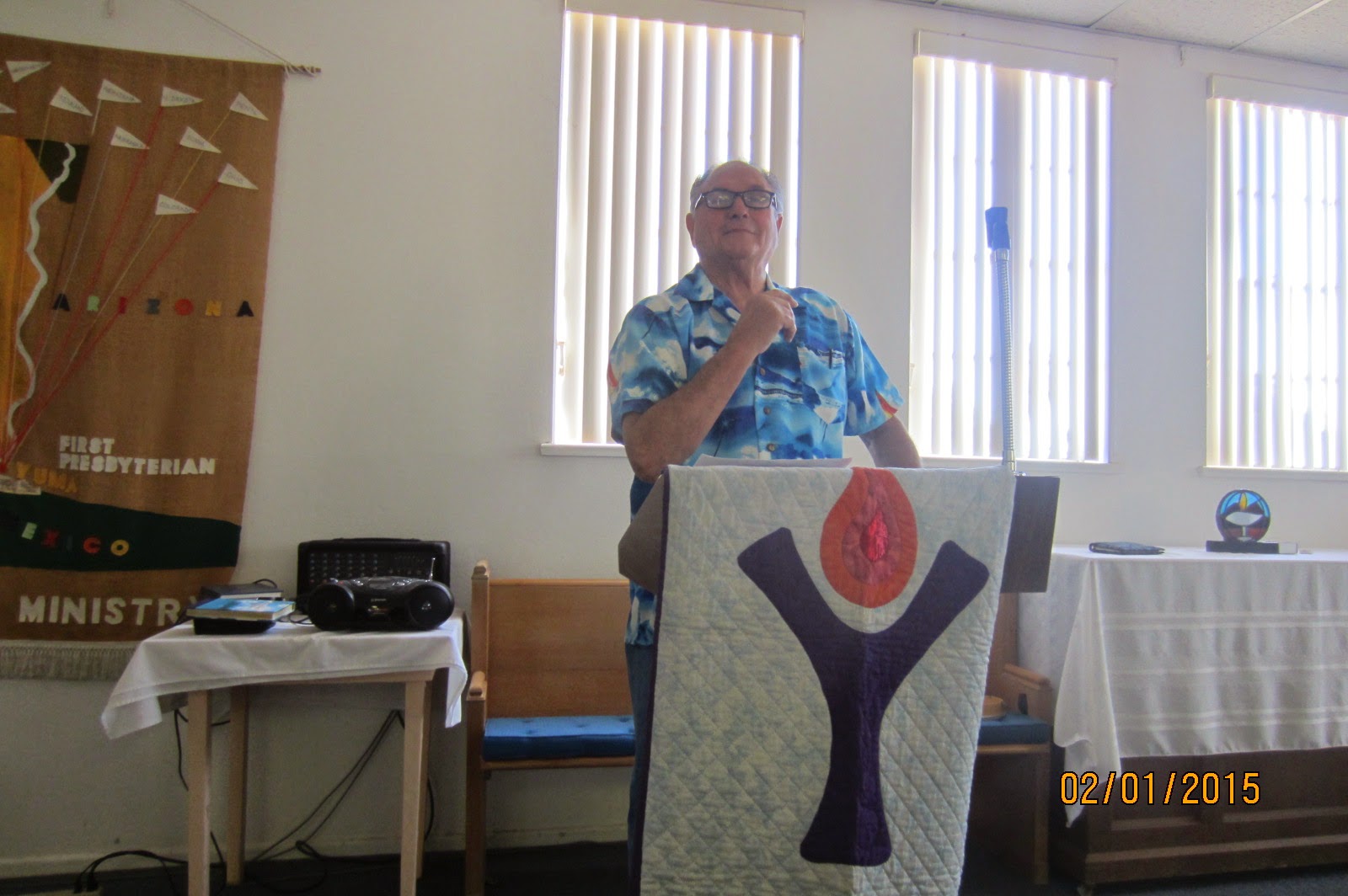 The Unitarians rent a chapel from the Presbyterian church and hold their meetings at 11:30 am on Sundays. Here, I've just begun to speak. 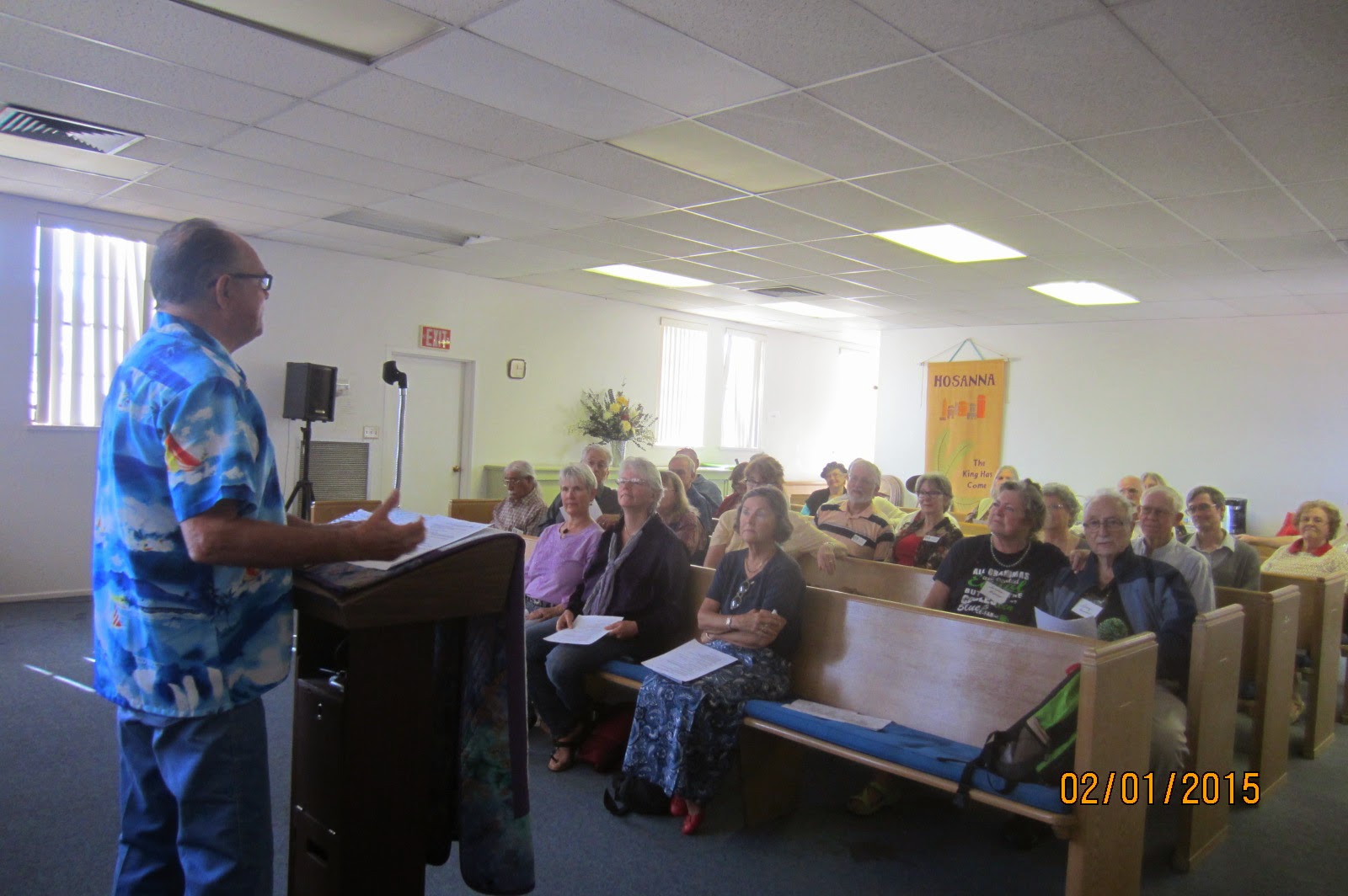 Not a big group--they rarely are---but most sizable towns usually have a Unitarian/Universalist congregation..  At least 5 U.S. presidents were Unitarian: Jefferson, John Adams, John Quincy Adams, Millard Fillmore, William Taft. And Lincoln is said to have Universalist leanings.
If you are curious about them---here are their 7 principles:

Note that they have no "doctrines".  Over time they have gotten rid of them all: (The trinity, Divinity of Jesus, Virgin Birth, Atonement, Hell etc) and focused on VALUES----like those above.

To save time, I passed out copies of Maslow's 22 characteristics of self actualized people:


1. HAVE MORE EFFICIENT PERCEPTION
Unusual ability to detect the spurious, the fake, dishonesty in personality
In general, to judge people correctly and efficiently.
They can see reality more clearly.
2. ARE NOT FRIGHTENED BY THE UNKNOWN
Tolerate, even enjoy ambiguity

4. ENJOY THEMSELVES WITHOUT SHAME

7. ARE MOTIVATED BY AN URGE TO GROW (Versus deficiency motivation)
Living vs. preparing to live
They don’t strive, they develop
They attempt to grow to perfection - to develop more and more fully their own style.

8. FOCUS ON PROBLEMS OUTSIDE THEMSELVES
They are problem-centered rather than ego-centered.
They usually have some mission in life.

9. HAVE THE QUALITY OF DETACHMENT
They remain unruffled, undisturbed by that which produces turmoil in others.
They find it easy to be aloof, reserved, calm, serene.
They take personal misfortune without reacting violently.
They are more objective and therefore can concentrate better.
They don’t need others in the ordinary sense.
They are self-governing, self-disciplined.
They are the deciding agent rather than a pawn.
They have more free will.

11. ARE MORE INDEPENDENT OF CULTURE AND ENVIRONMENT

12. HAVE A CONTINUED FRESHNESS OF APPRECIATION
They count their blessings.

13. HAVE HAD A MYSTIC EXPERIENCE (a peak experience)
These are experiences, usually brief, of limitless horizons opening up to the vision.
The feeling of being simultaneously more powerful and more helpless than ever.
The feeling of great ecstasy, wonder, awe.
The loss of placing in time and space.
The conviction that something extremely important and valuable has happened so that
One is to some extent transformed and strengthened.

14. HAVE DEEPER FEELINGS OF IDENTIFICATION, SYMPATHY AND AFFECTION.
Despite occasional anger, impatience, disgust.

15. DESIRE TO HELP THE HUMAN RACE.

17. ARE DEMOCRATIC
Are friendly with anyone with suitable character, regardless of class, education, or race

18. CAN DISCRIMINATE BETWEEN MEANS AND ENDS, GOOD AND EVIL
They are clear in themselves though often their notions of right and wrong are not the
conventional ones.

20. HAVE A NON-HOSTILE SENSE OF HUMOR

22. ARE RESISTANT TO ENCULTURATION
They transcend any particular culture.

I let them scan these 22 points for a bit---till they got the gist of what I meant by Whole personality.--then speculated that most people in this room would possess most of these characteristics.
Indeed, a roomful of Unitarians usually represents the "cream" of their town:  Better educated, more mature personalities---representing the best humanity has to offer---as voiced by shakespeare:

What a piece of work is man!
How noble in reason;
How infinite in faculty;
In form and moving--how express and admirable.
In action--how like an angel;
In apprehension--how like a God.
The beauty of the world;
The paragon of animal.

I asked:  Who we might know in history that embodied these characteristics? A few came to my mind:
Buddha, Socrates, Voltaire, Lincoln, Walt Whitman, Ben Franklin

I asked who--in the movies--demonstrated an enlightened personality?  Three came to mind:
Anthony Quinn in Zorba the Greek
Russel Crow in Master and Commander
Daniel Day Lewis in Lincoln

Then I asked how these "super" personalities are made?  I speculated:
1. That they are self-made by personal resolve. (Franklin made a list of qualities he aspired to and consciously focused on one of them till he was satisfied he had mastered it)
2. That interacting with their circle of close and worthy friends created a FEEDBACK LOOP wherein enlightened behavior elicited a rewarding response---which stimulated even more enlightened behavior and even more rewarding responses. (A feedback loop is like compounding interest on money---it builds at an ever accelerating rate ) Franklin called his circle of close friends
his Junto.  They met at a tavern on Friday nights--drank beer and had great conversations. (and they did more than talk---this terrific group of men improved their town--creating the first fire department in America--the first street lights--the first lending library and even founded the University of Pennsylvania.
Buddha's circle of friends were his forest buddies that supported his development.

Apparently it is true what Teilard De Chardin says:  "Isolation is a dead end---the self is fulfilled in community."

Precisely how interaction promotes personal growth may not be known, but I speculate that when friendly personalities engage for a period---one will see in the other some quality that they admire---and slowly (or quickly) that quality is appropriated by the other.  That is how personalities are grown.
That is why it serves us well to associate with the best of our friends.

When we engage with our friends--we do so at one of 4 levels: Ritual--(Hello how are you etc) Pastime (sports, gossip, hobbies etc) Work talk or Authenticity (what we really think, want, feel, have done)
It is at the level of Authenticity that personal growth occurs.

I closed my speech with a parable:  Verily I say unto you--your circle of friends is like unto rocks in a tumbler---each makes the others more beautiful as they tumble.
Posted by Randy at 3:00 PM 6 comments: