AUTO MEANS SELF. TELEOS MEANS END OR GOAL.  SO AN AUTOTELIC PERSONALITY IS A PERSON WHO CAN GENERATE THEIR OWN ENDS/GOALS/GAMES.  Wherever they find themselves, they create interesting things to do. 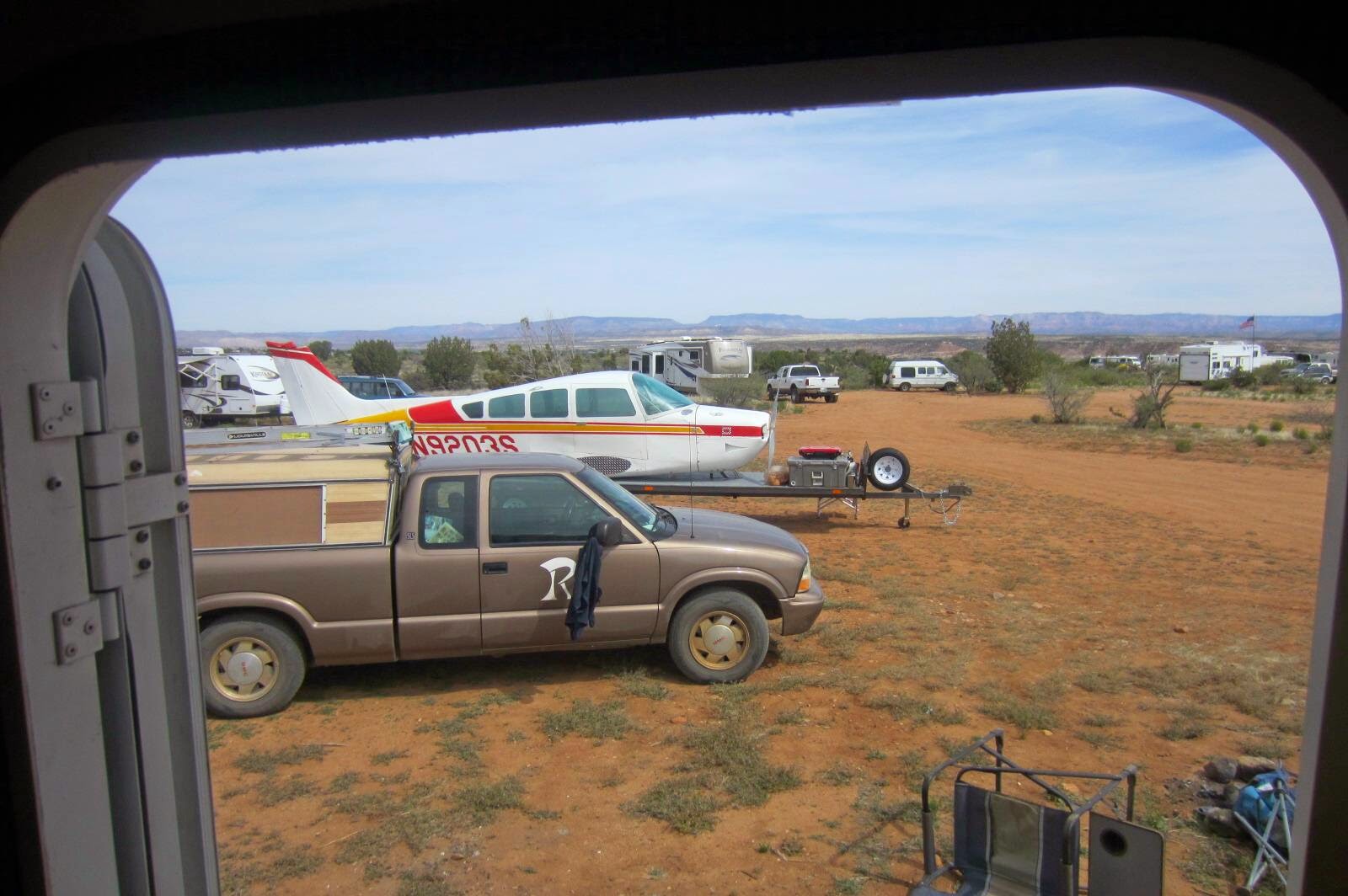 I opened my door one recent morning to this sight.  Somehow in the night, an airplane had settled itself alongside. 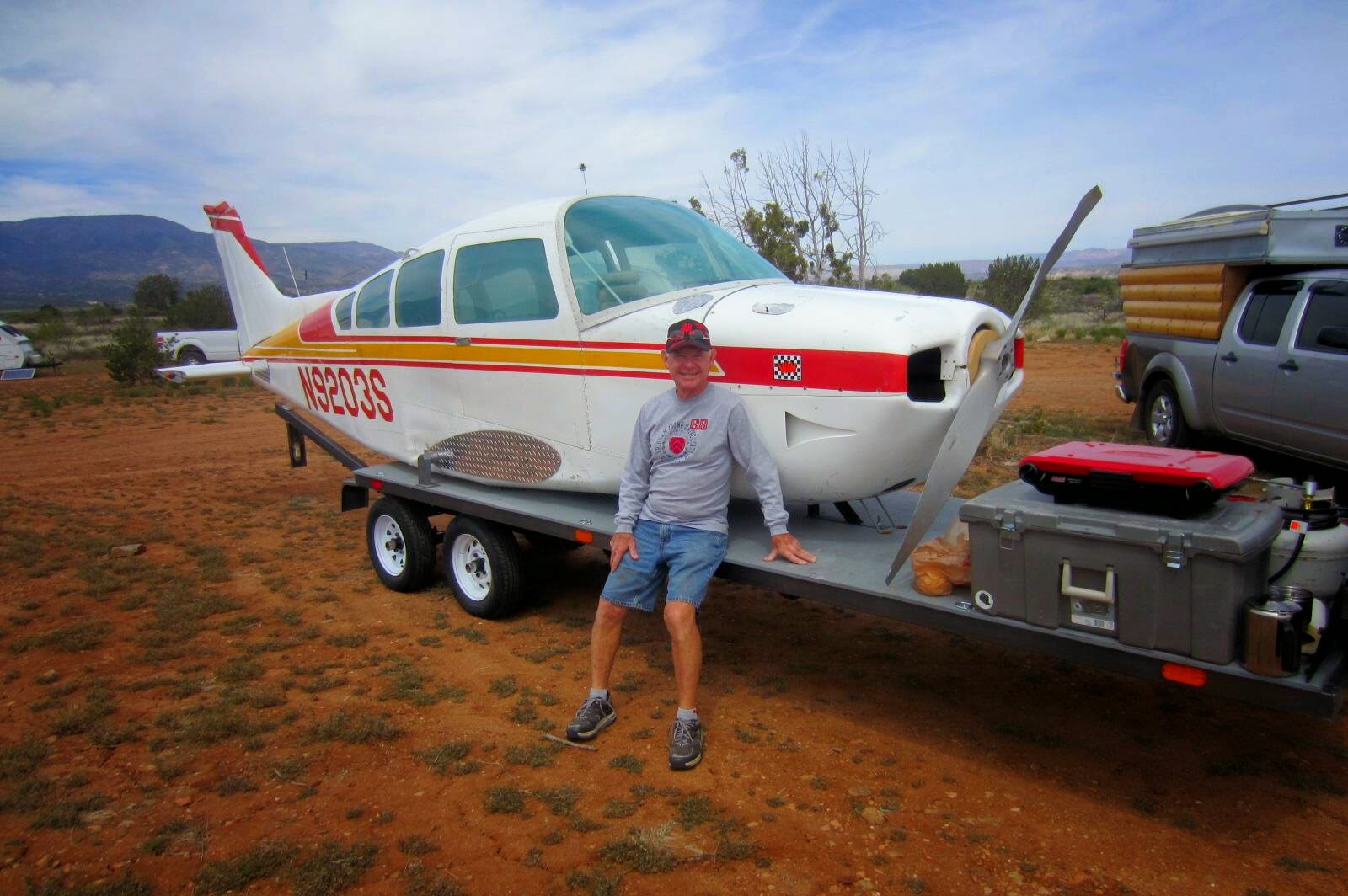 Turns out, it's an old friend Jon Tremellion---and suddenly, I'm a little less surprised.  This is the sort of thing he does regularly. 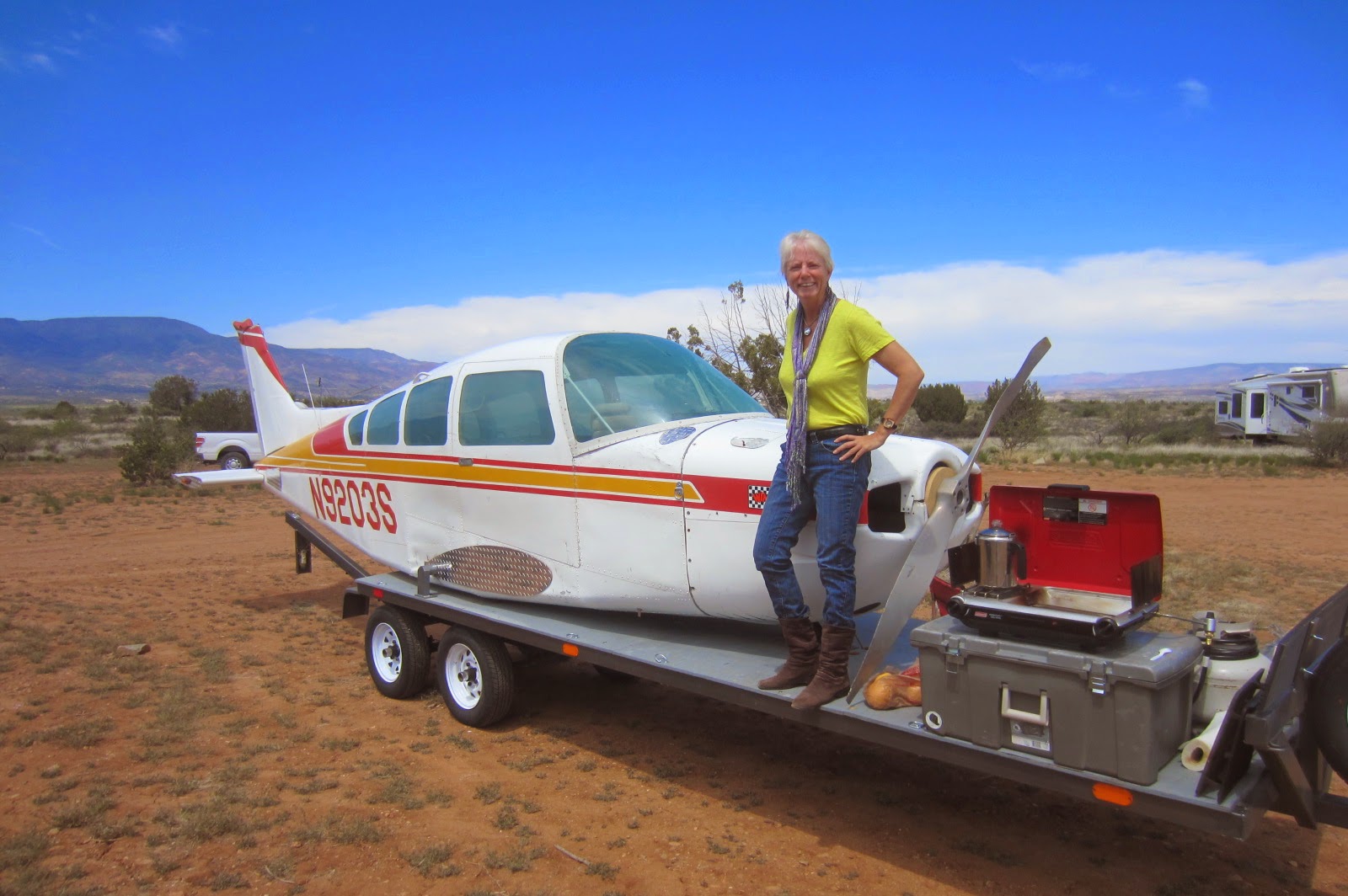 Laurie drops by, poses her pretty self and together we weedle the story out of John. 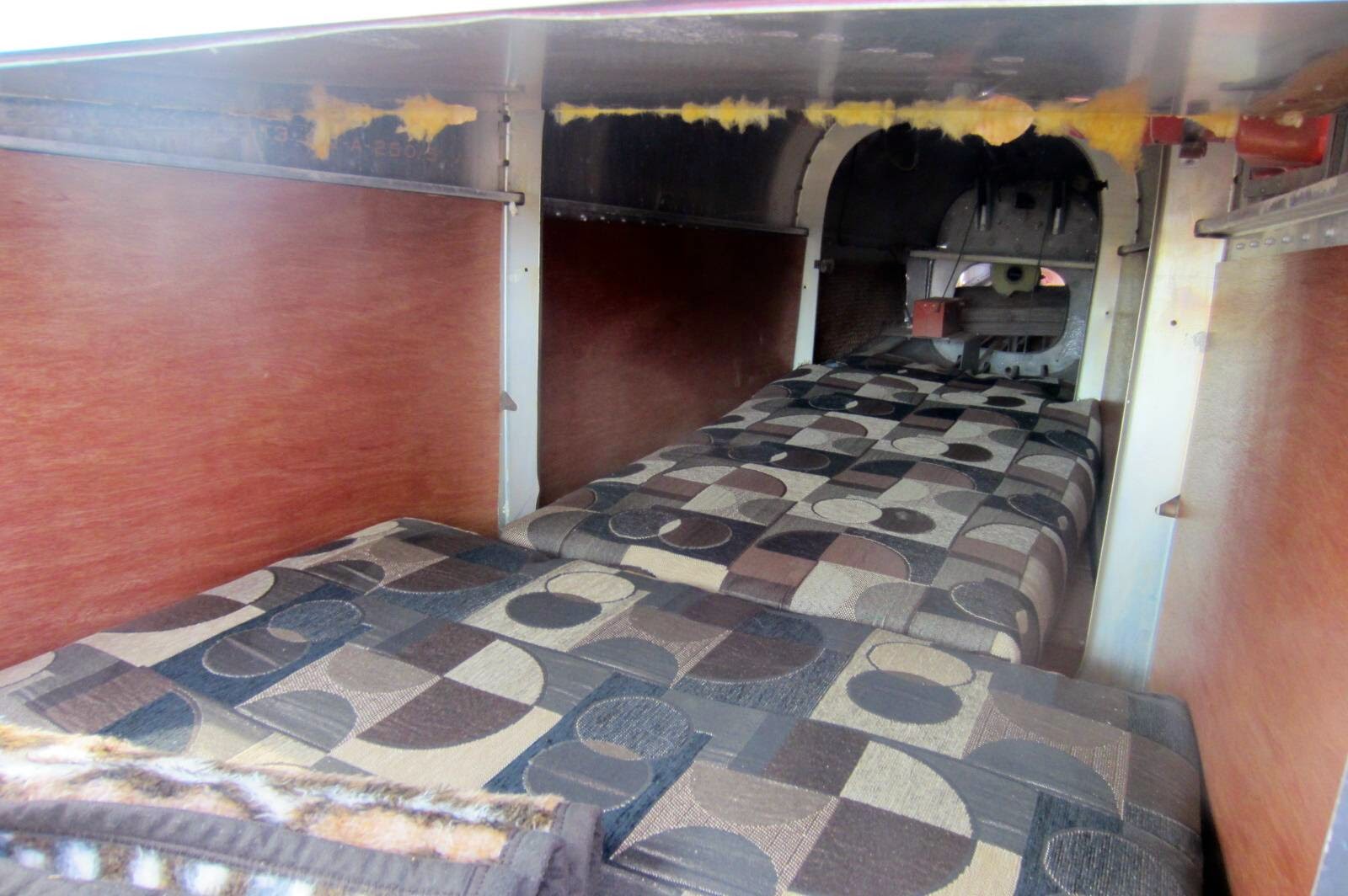 Even he does not know what he intends to do with his airplane, but here is a first thought: sleep in it.
Looking tailward is a cushion/bed. 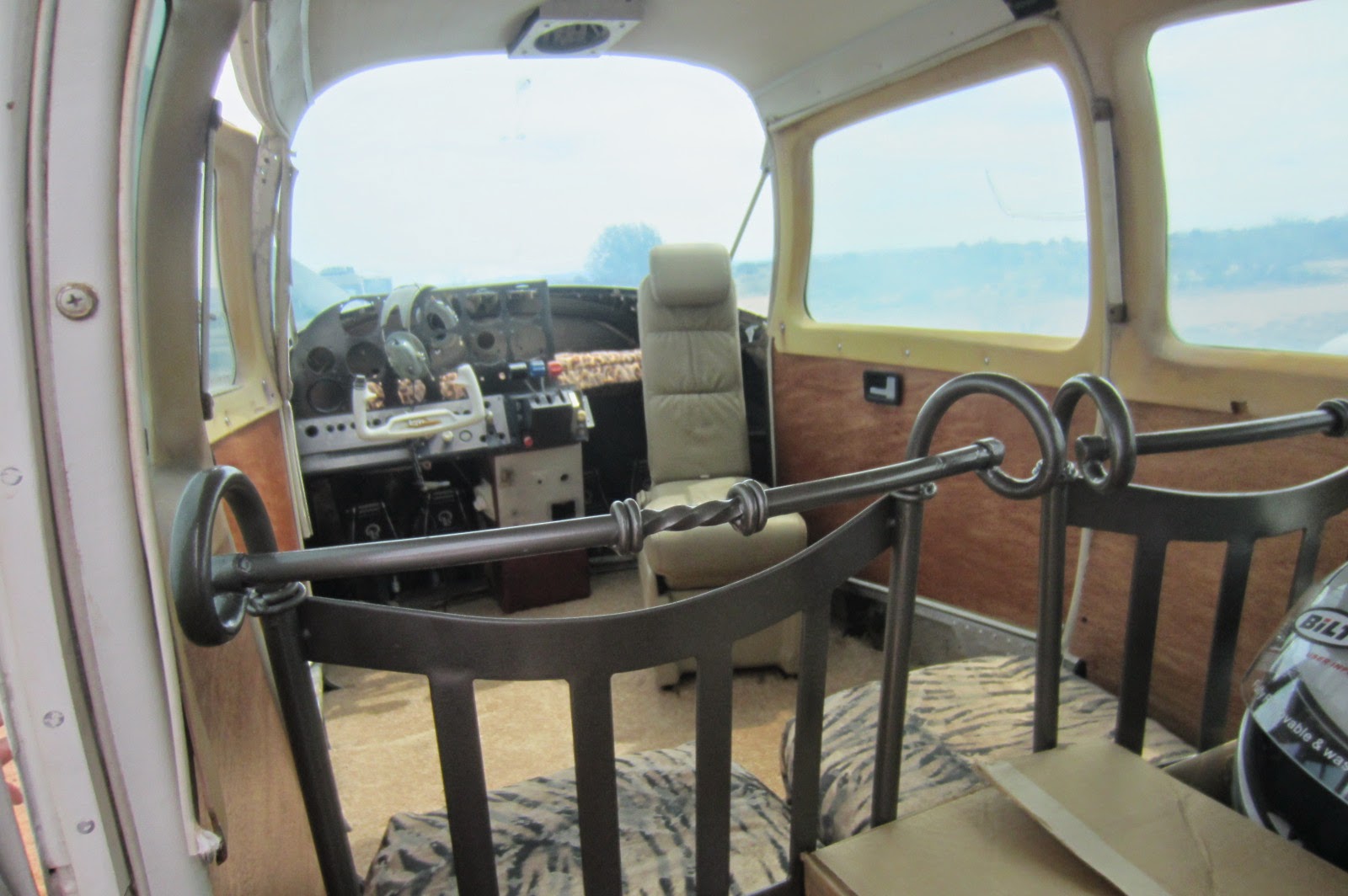 Lots of space in the cockpit for camping gear. 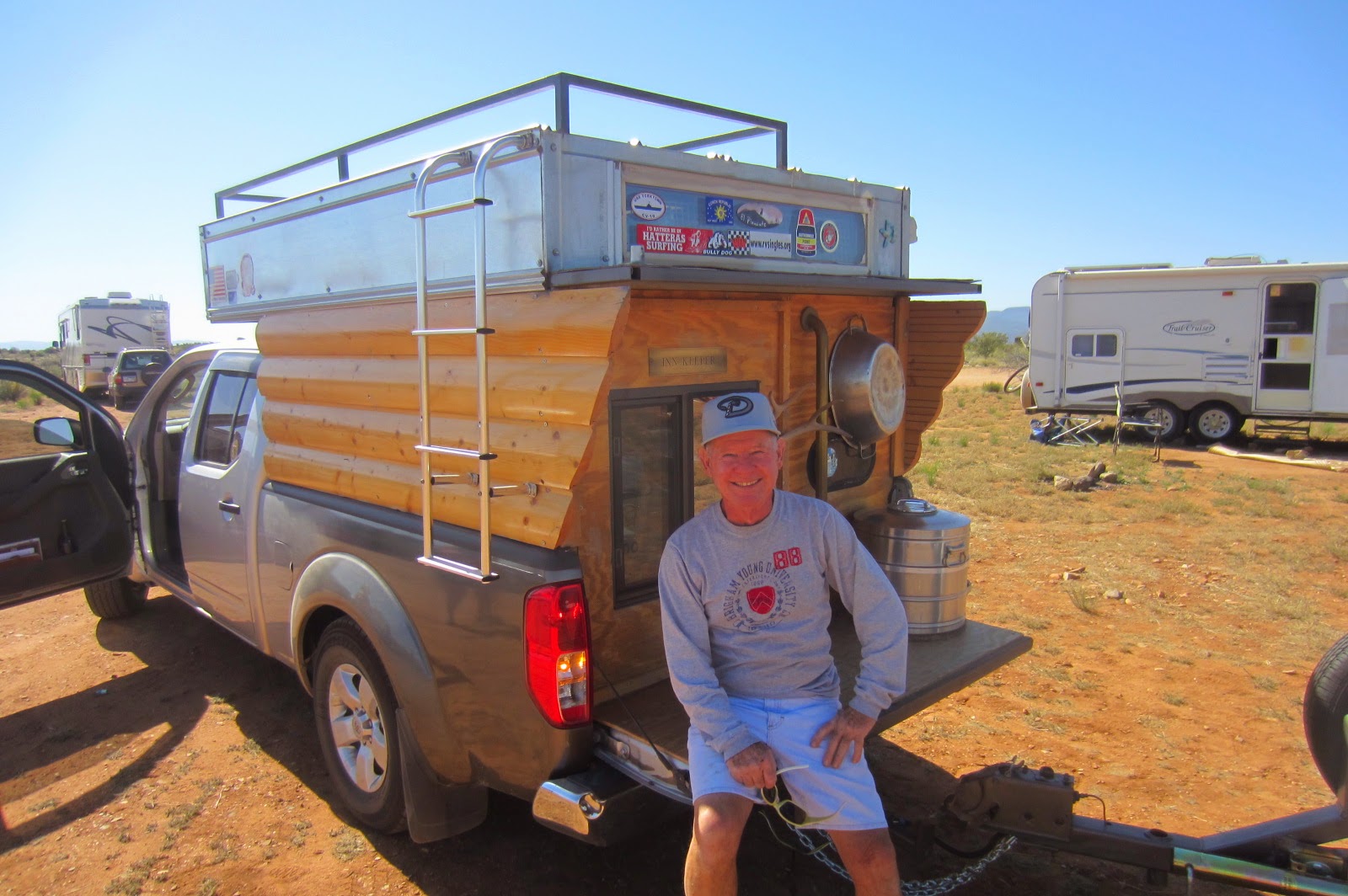 His truck is a camper---but it is full of "pickings".  Jon defines himself as a picker.  Someone who buys things and resells them---hopefully at a profit.  He bought this wrecked airplane in Quartzsite, Az---(behind the Love station) 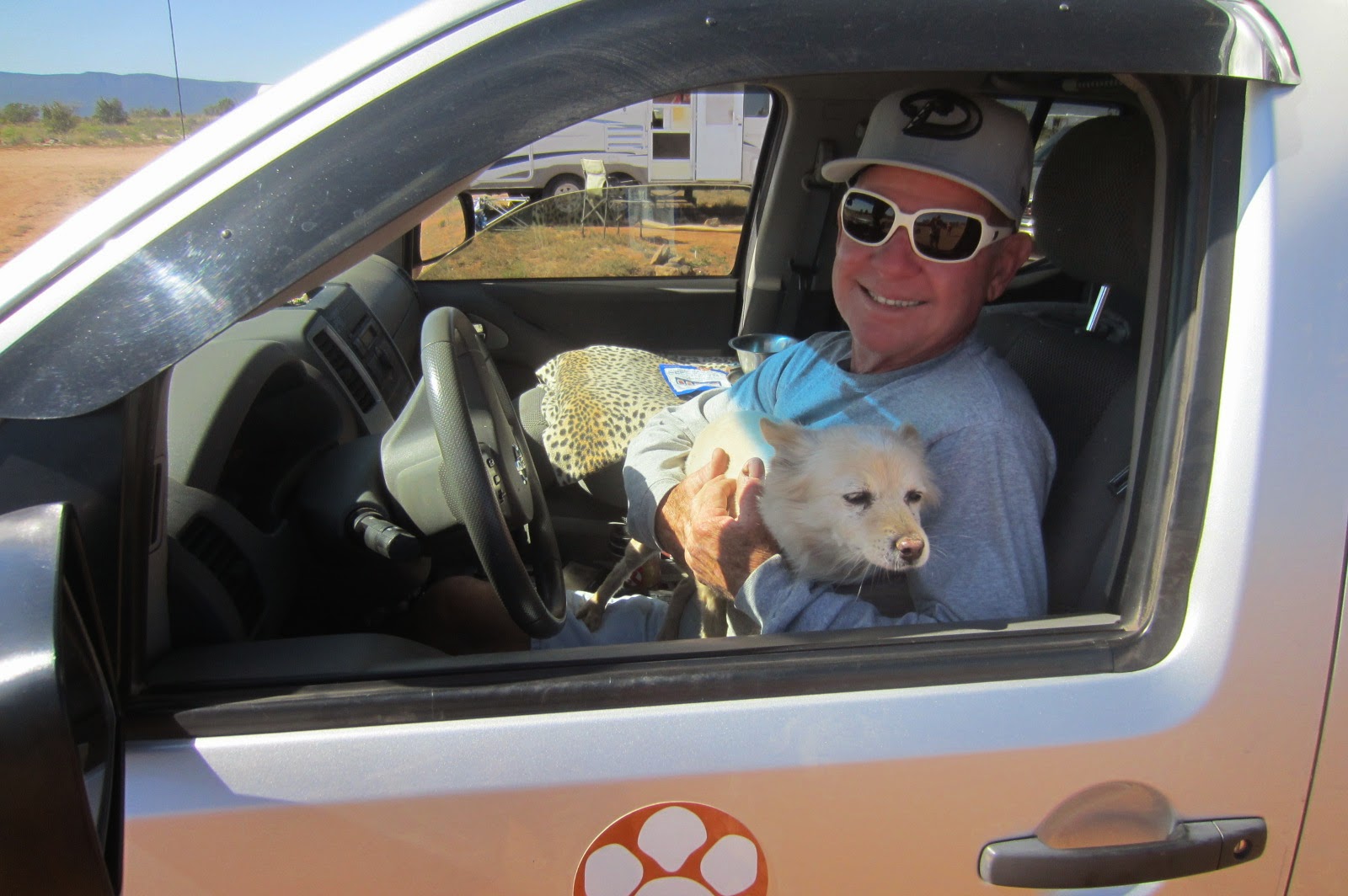 And he's off with his longtime companion Conch for more Picking. 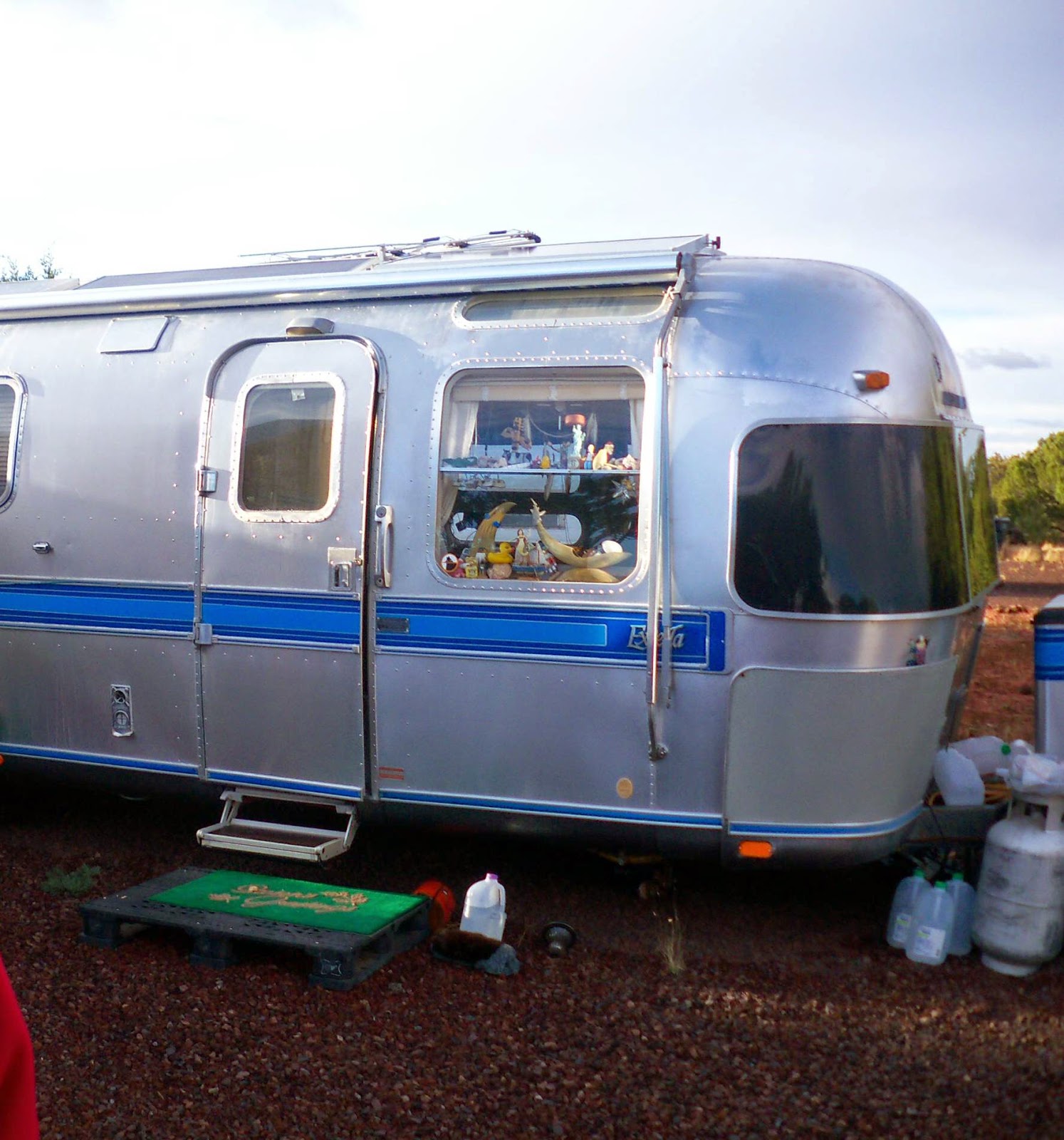 He owns a classy Airstream trailer but has settled it more or less permanently at his mini-ranch near ShowLow, Az.  (he and 3 friends bought and share a lot in ShowLow pines subdivision for about a $1000 each.)  Interested in a cheap, high country get-a-way spot? (elevation 6,500 ft)--Here's a lady with similar big (acre and a third) lots in the same subdivision to sell: senoraberry@yahoo.com. (current cost: 4-6 thousand----4 of you could split that cost as John did and have neighbors) 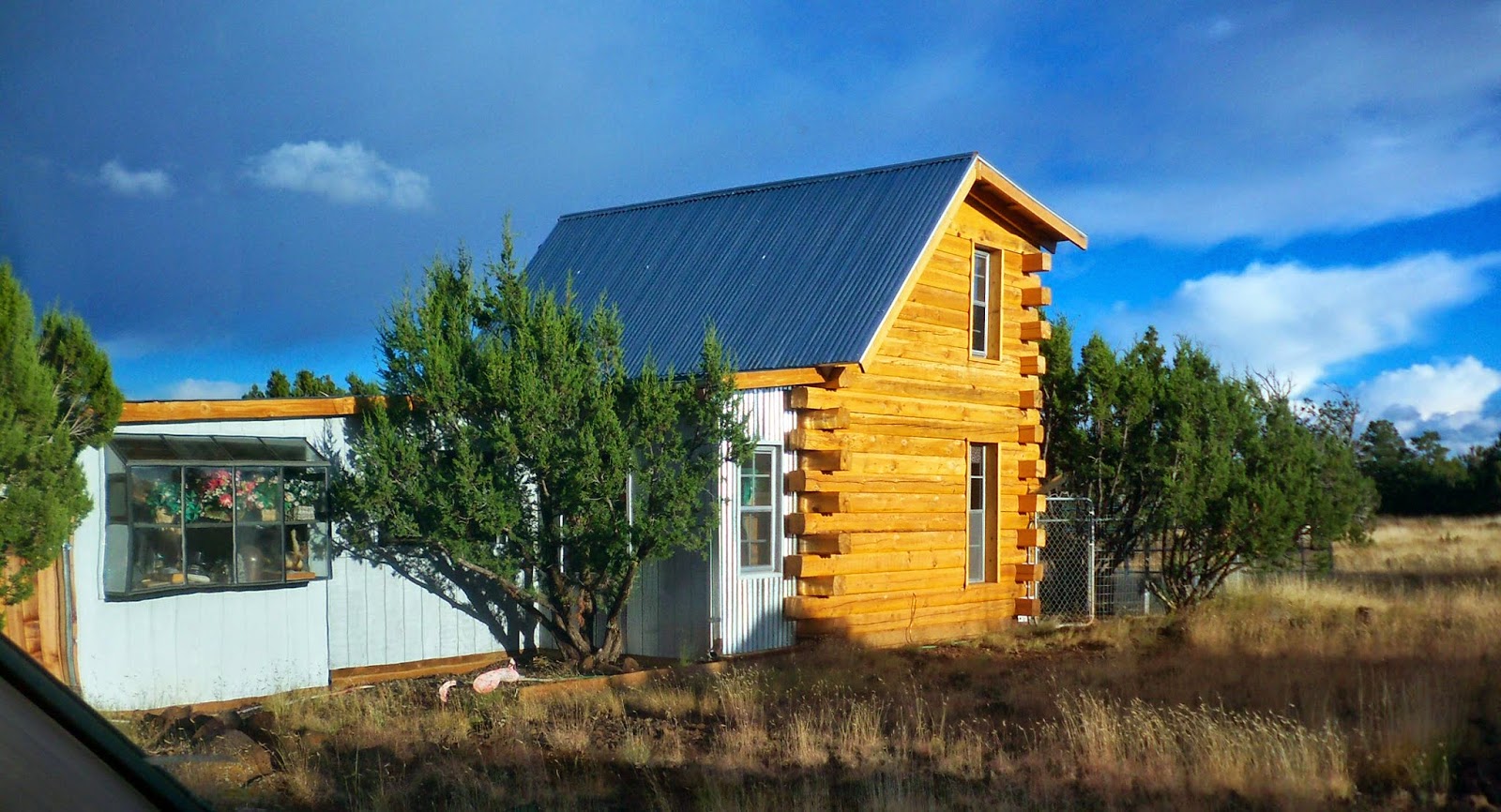 He built this cozy cabin with timbers from another "picking" purchase: a huge pile of them--- not knowing what he would do with them---but was sure they were a bargain.  He brought them home, pondered awhile, then built this.  A huge stack was left over----which he sold for more than the original cost. 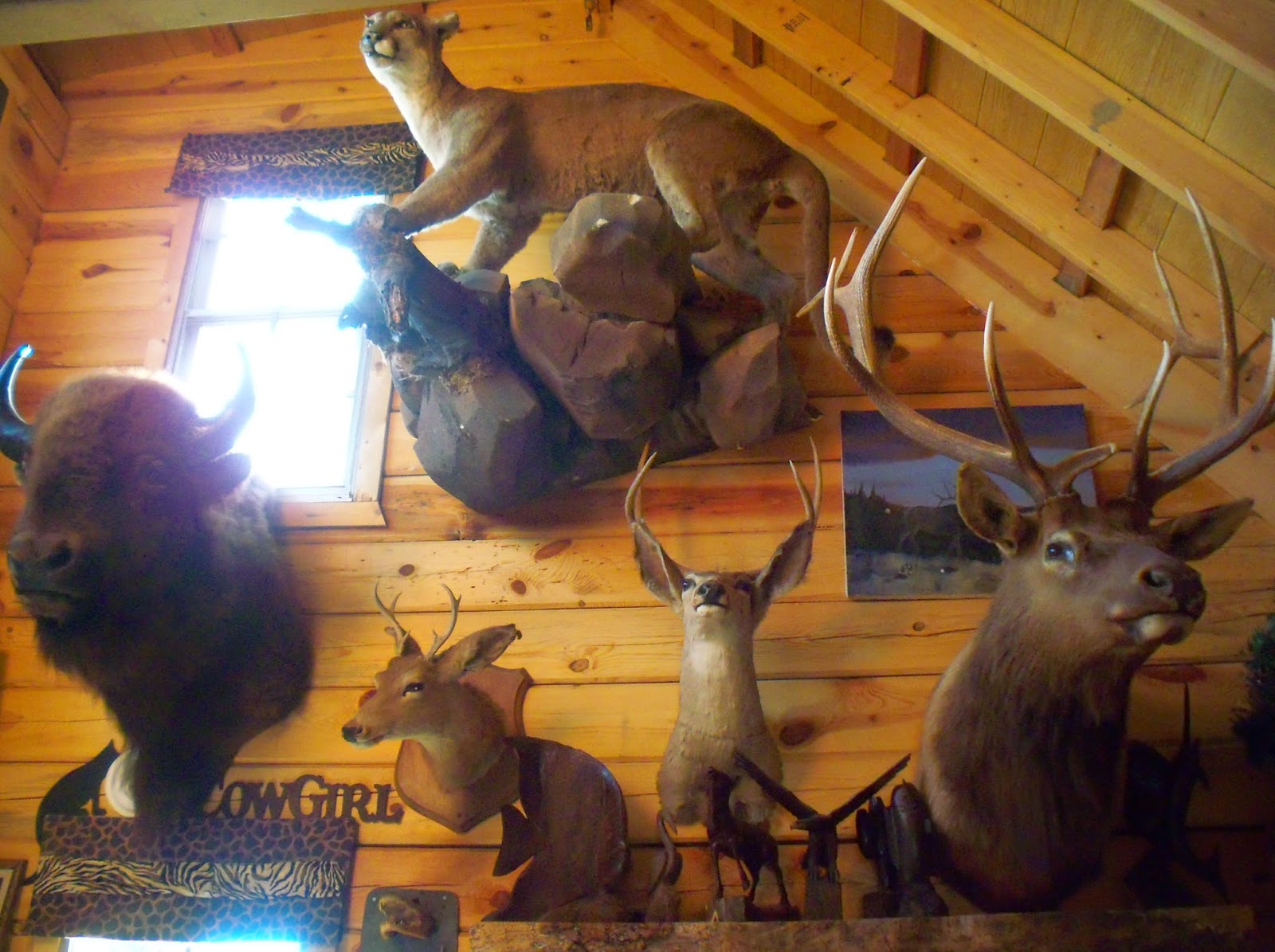 Here's another example of his Picking prowess.  Bought this collection of trophy heads because the price was right---mounted them in his cabin till they were sold at a substantial profit. 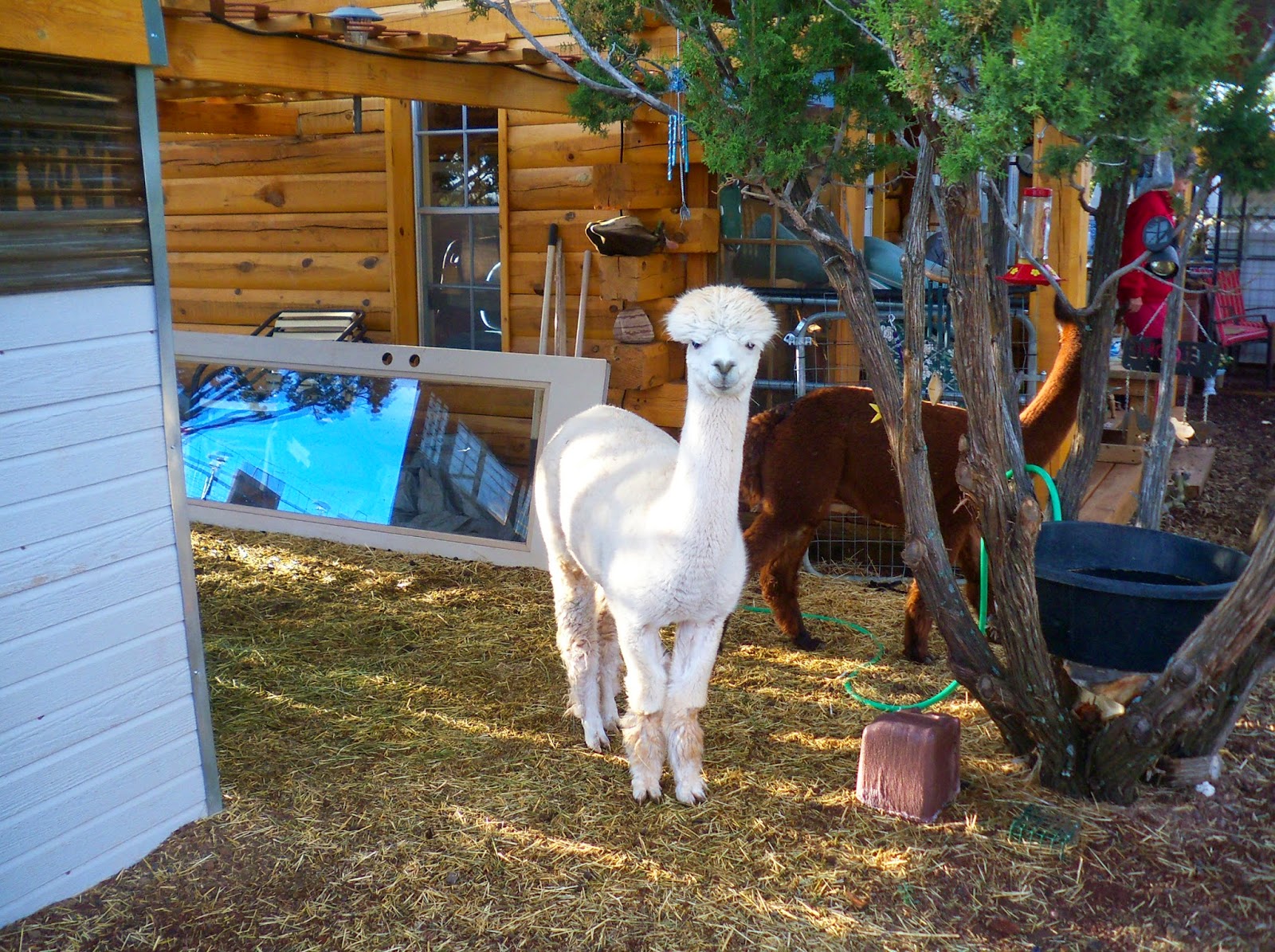 Another odd purchase---a pair of Alpacas.  Don't know if he turned a profit on them---but they were adorable pets. 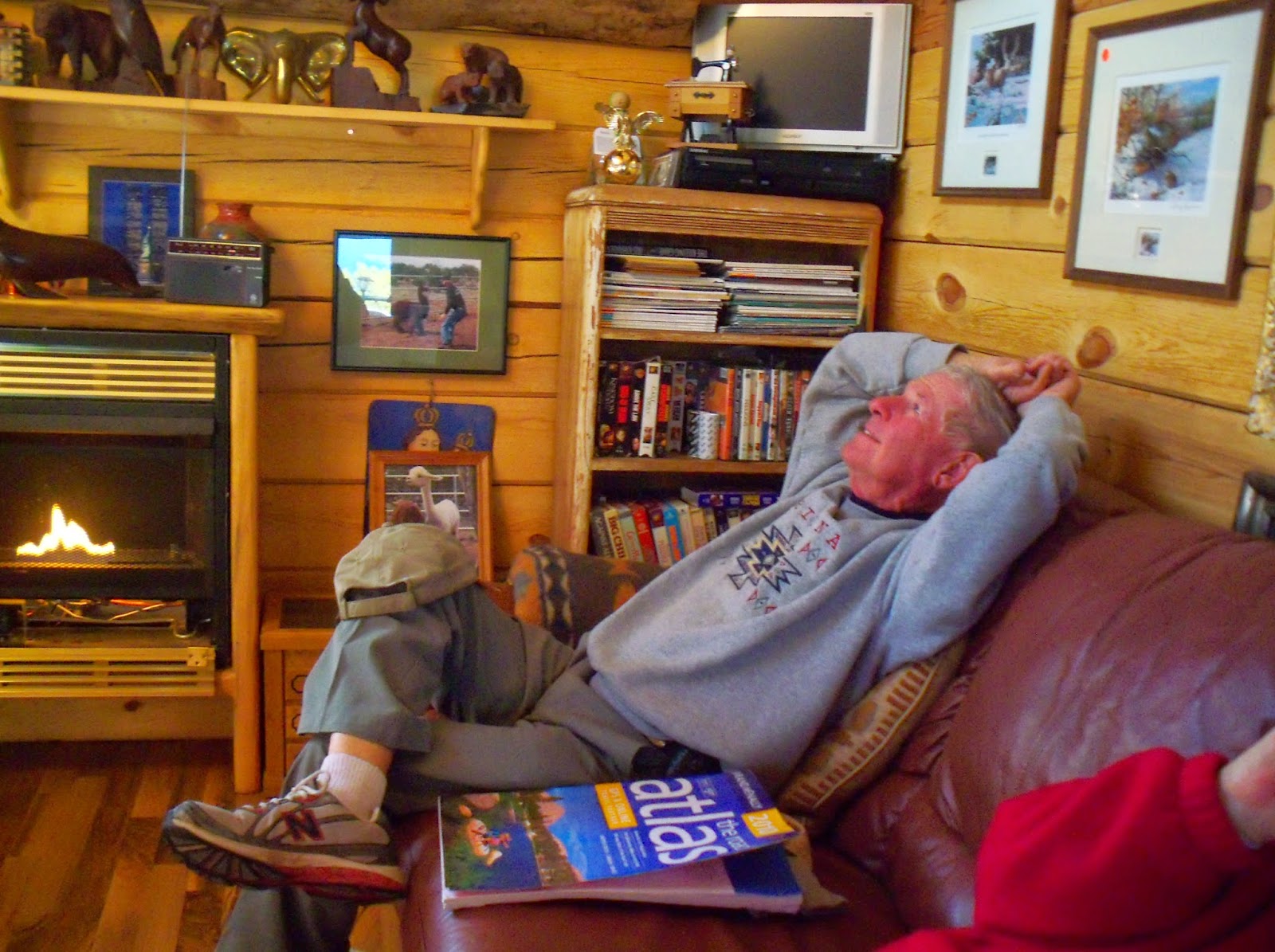 There, friends, is a happy man---a man with interesting things to do.  I daresay he will never run out of projects.

RANDY PHILOSOPHIZES:  I have long admired this guys ability to generate meaning for himself---and others.   He built a social room where his high country neighbors gather daily.  Whenever he joins his travel group (the WINS---www.rvsingles.org) he quietly arranges the makings of a party---and sure enough, he is soon surrounded by friends.
AUTOTELIC  personalities have been scientifically studied by a man with the odd name of Csikszentmihaly who wrote the book FLOW to describe the process of becoming one.  It is the clearest explanation I have found about how to generate meaning.
If you would like to see a movie that---more or less---illustrates this type of personality---check out KING RAT. ---About a man who generates meaning even in a POW camp.

BUT WAIT----THERE'S MORE--another story here that I shall call HIDDEN VALUE. John makes a good living and a good life by seeing, securing, surfacing and then selling the VALUE that is hidden  in things.
Hidden value, great and small exist all around us---from aluminum cans in a dumpster to undervalued companies that can be purchased, tweaked and sold for grand fortunes---as did J.P. Morgan.

The greatest hidden value bargains are found in PEOPLE----and I think most of us are undervalued.  Let us hope that someone like John will see and surface our hidden value to the world. Or, better yet, wake ourselves up to our real worth.
Posted by Randy at 4:21 PM 5 comments:

A HEALTHY PERSONALITY CAN MAKE A SATISFYING LIFE WHEREVER THEY FIND THEMSELVES.  THOUGH I HAVEN'T SEEN HER IN 4 MONTHS--- WE COMMUNICATE ALMOST DAILY.  WILL GO TO SEDONA, AZ AND SEE HER NEW LIFESTYLE UP CLOSE. 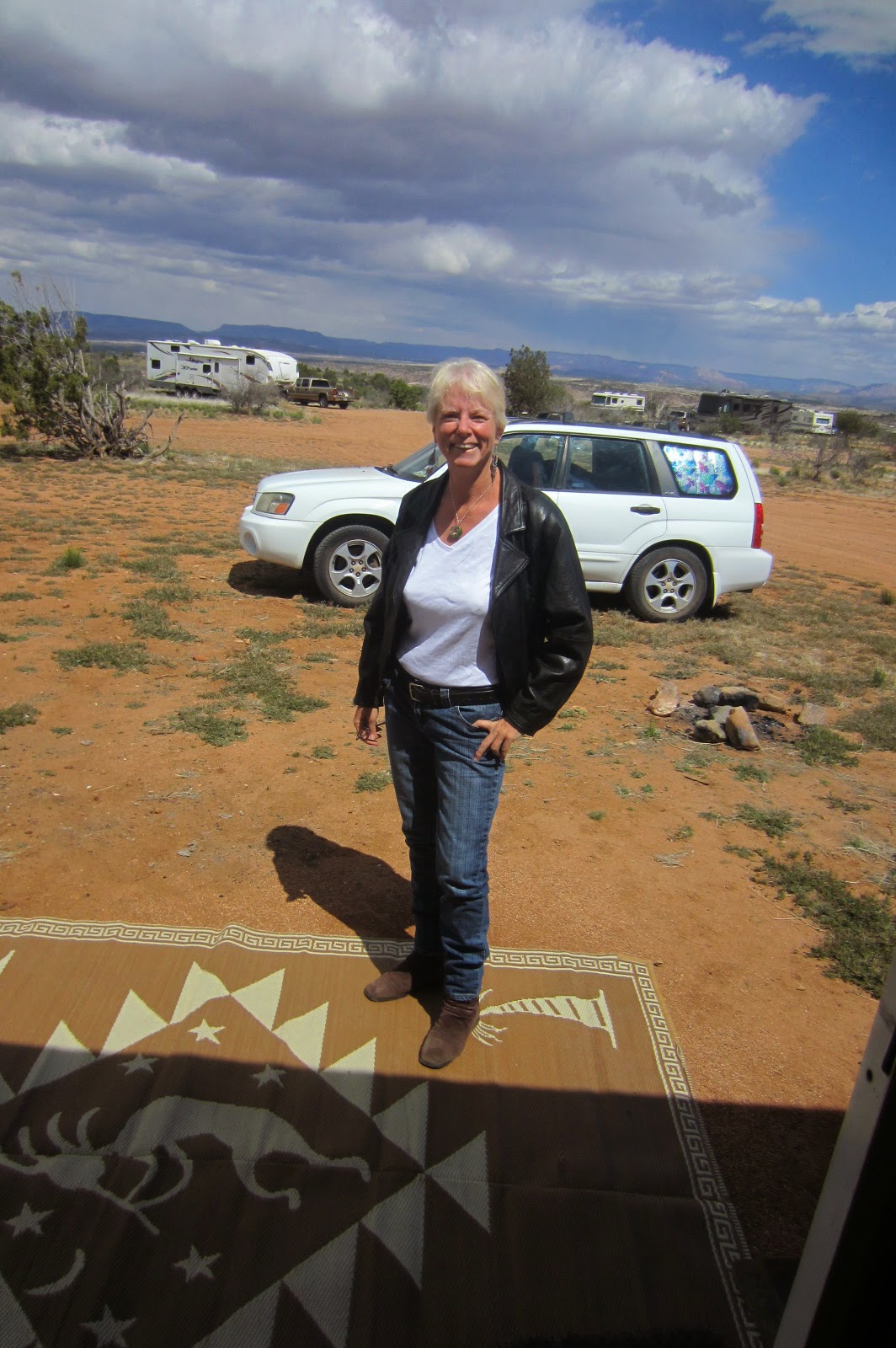 My regular readers will instantly recognize Laurie Theodorou---singer/songwriter---co-founder with me of the Quest-for-Community Caravan.
She shows up at my door "looking better than a body has a right to." 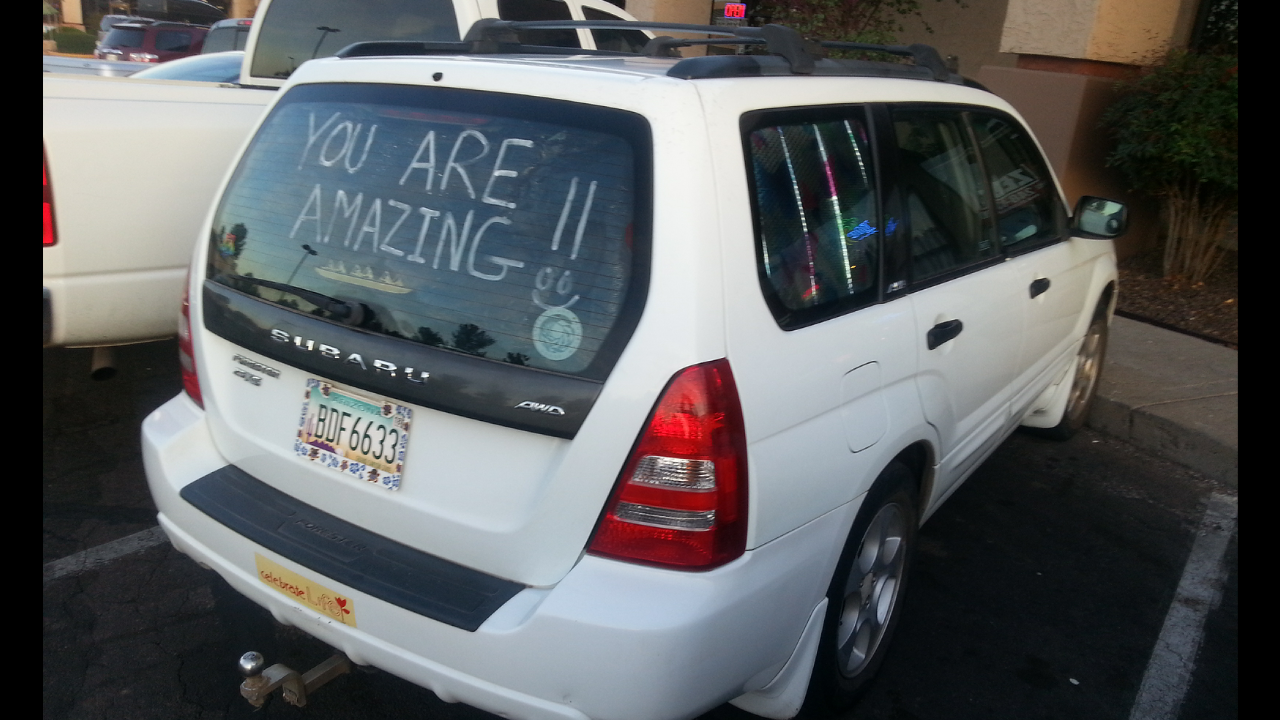 Her car is spiffied up a bit---and this message:
YOU ARE AMAZING---
proclaims to all--- that she considers them amazing---and suggests they ponder their "amazingness." 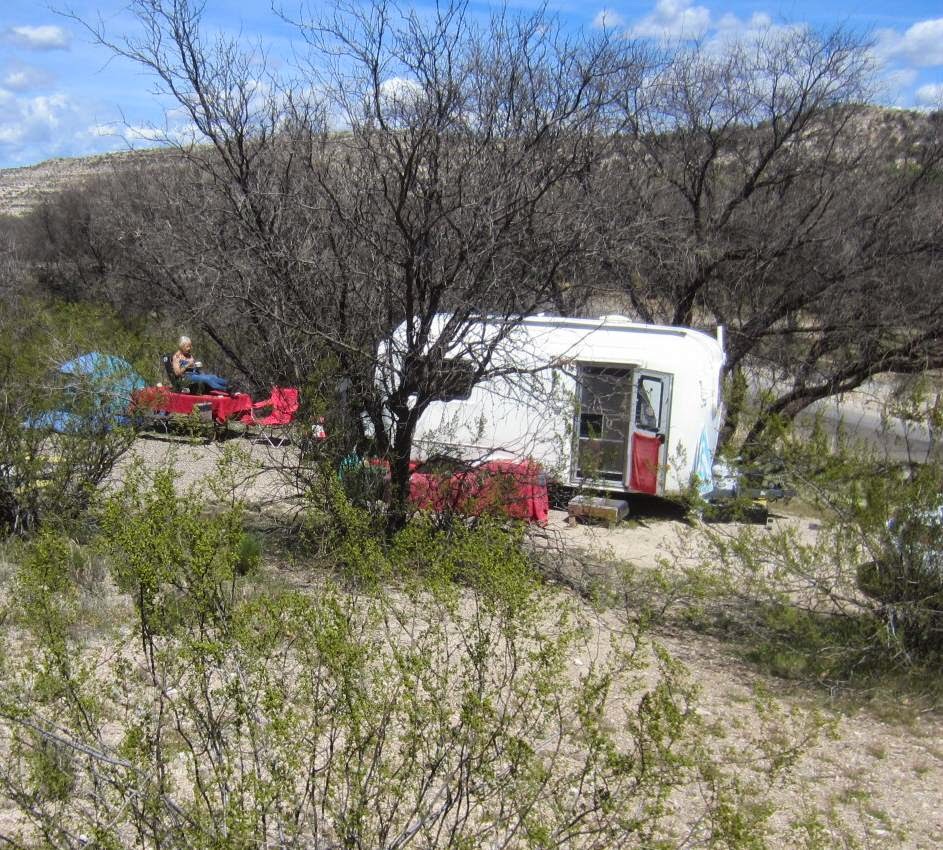 Invites me to her hide-a-way home parked in an obscure corner of a fancy resort. 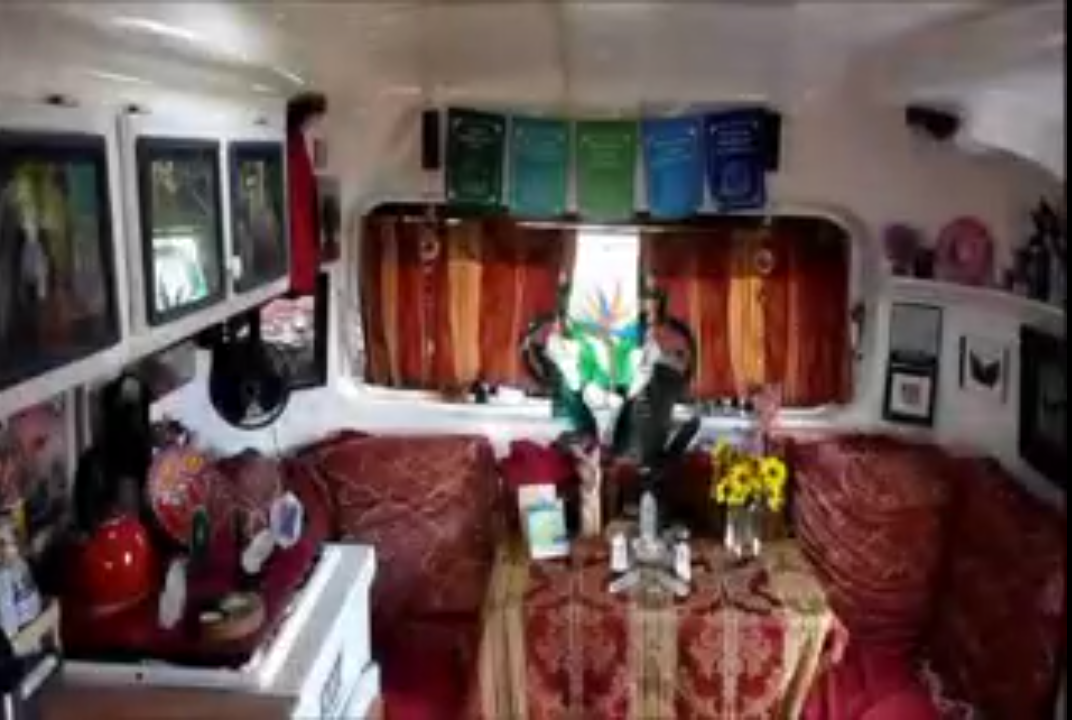 Don't be deceived by its humble exterior---her Casbah's interior is an elegant and cozy sanctuary while she is on her "Ambassador of love" tour. 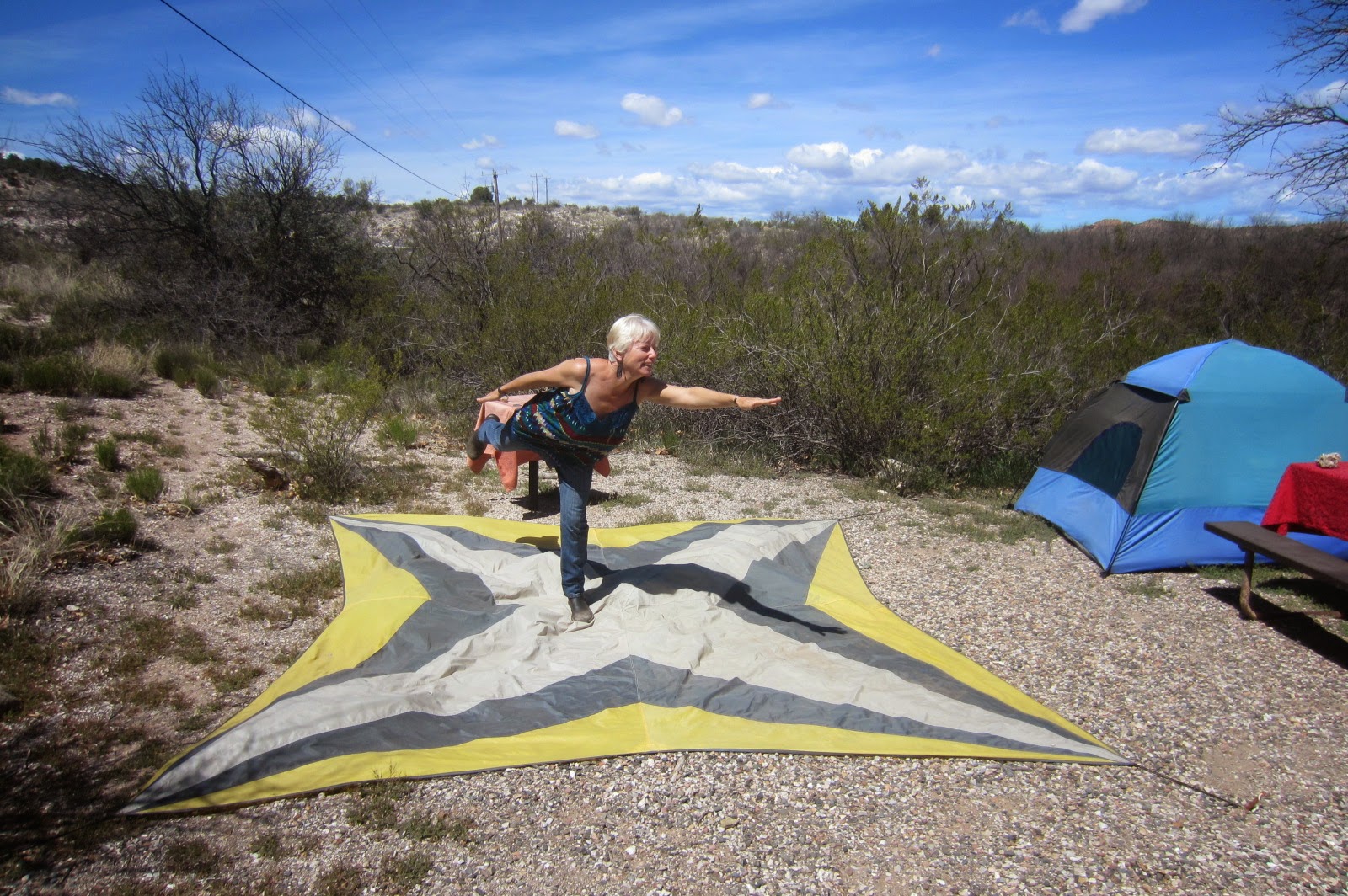 Shows a favorite yoga posture on her 'yoga launch pad'. 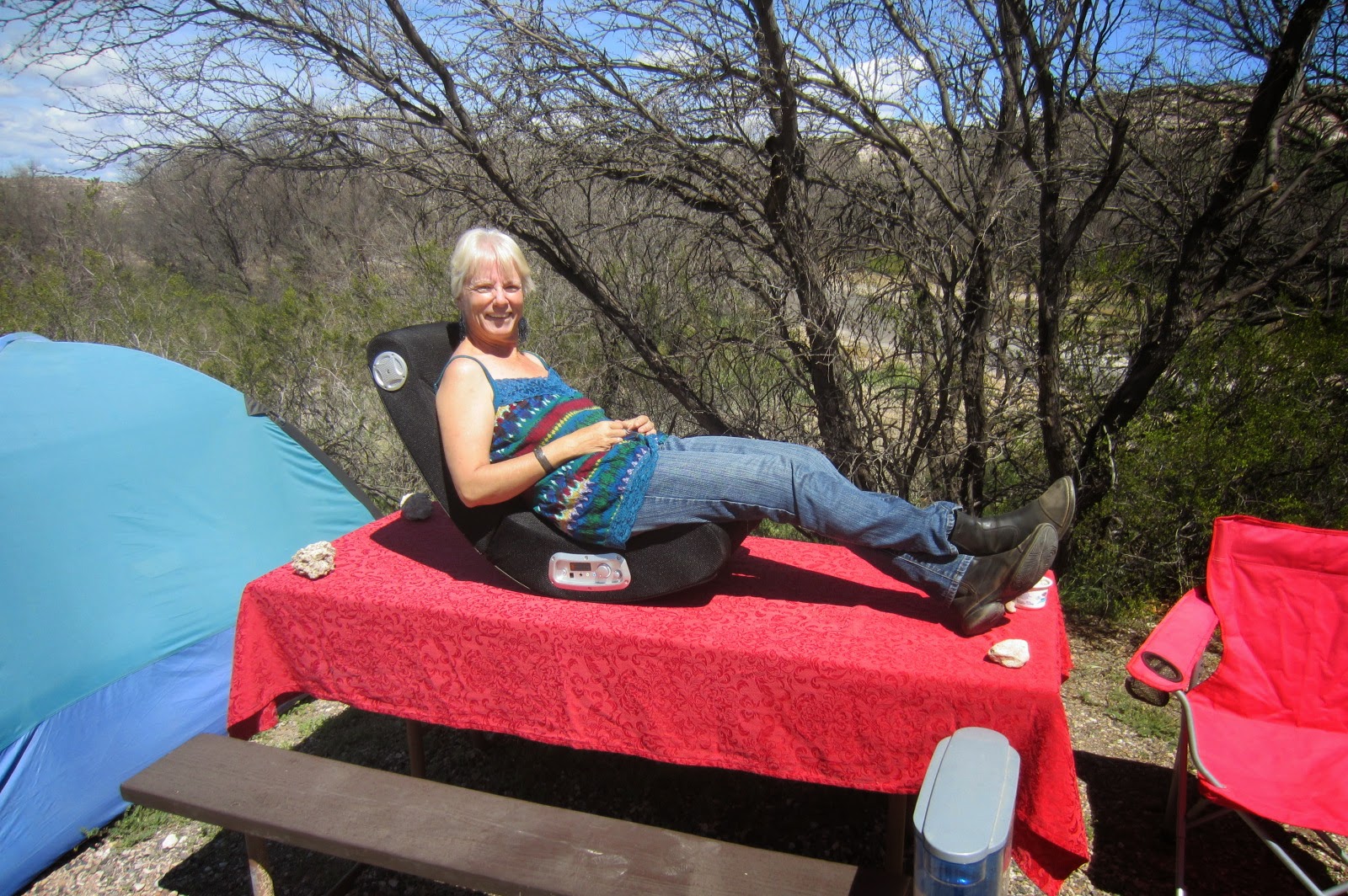 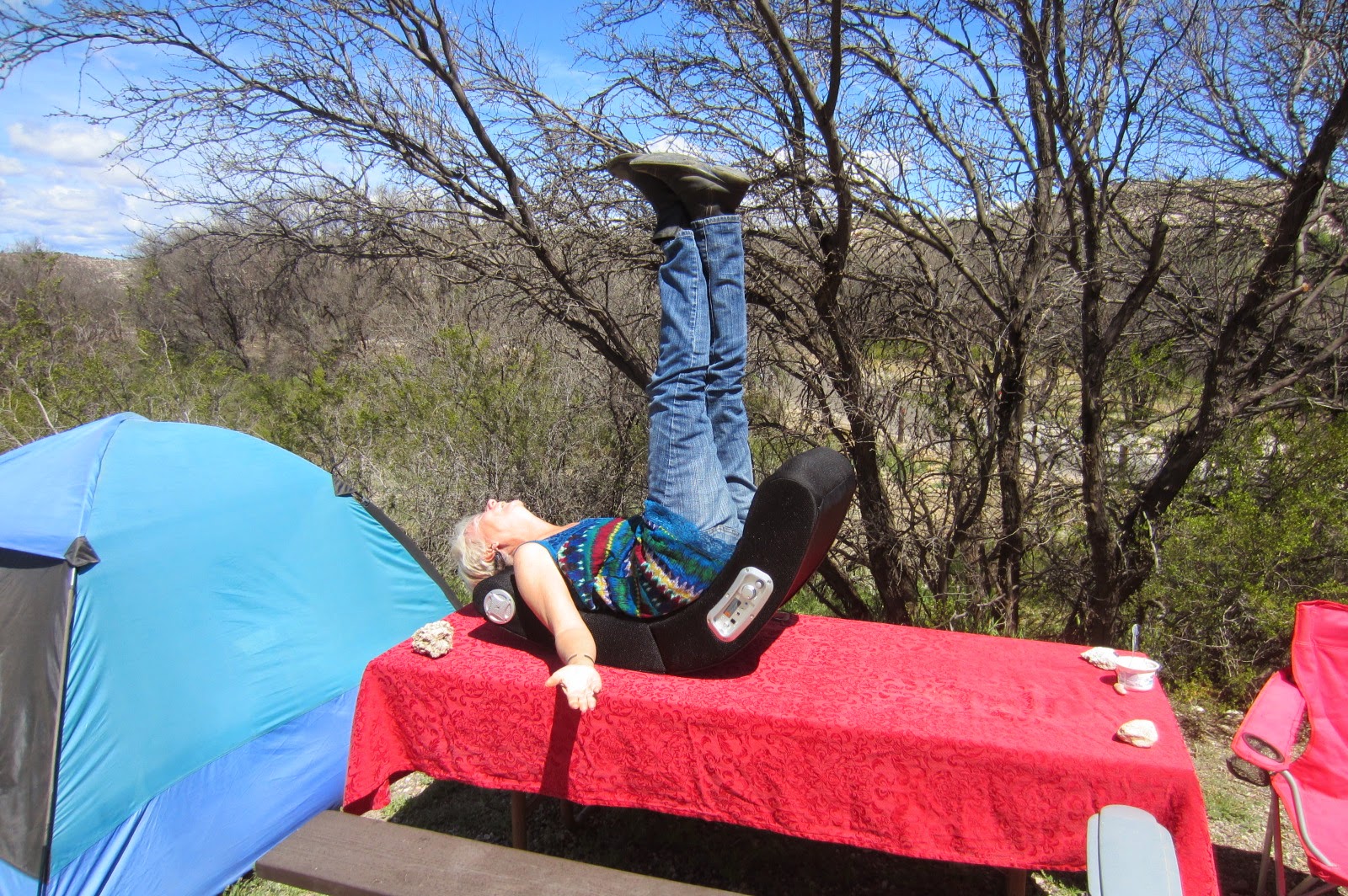 that lends itself to many positions as the music plays on. 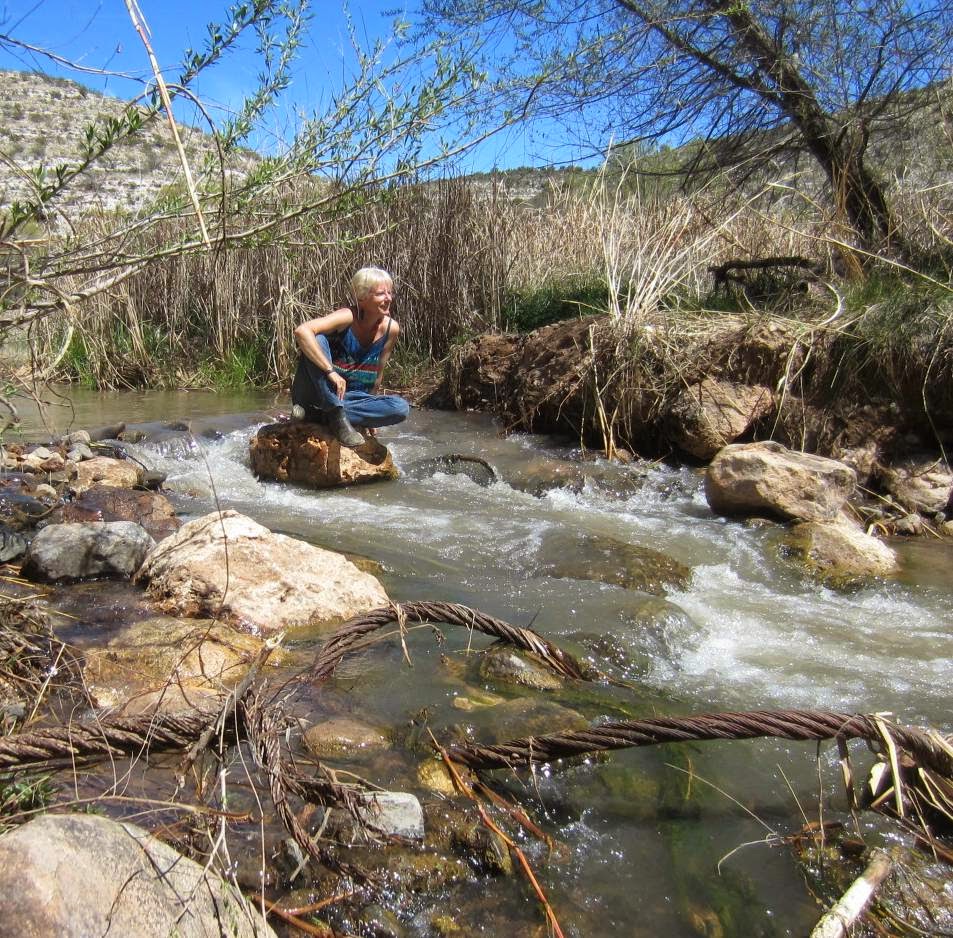 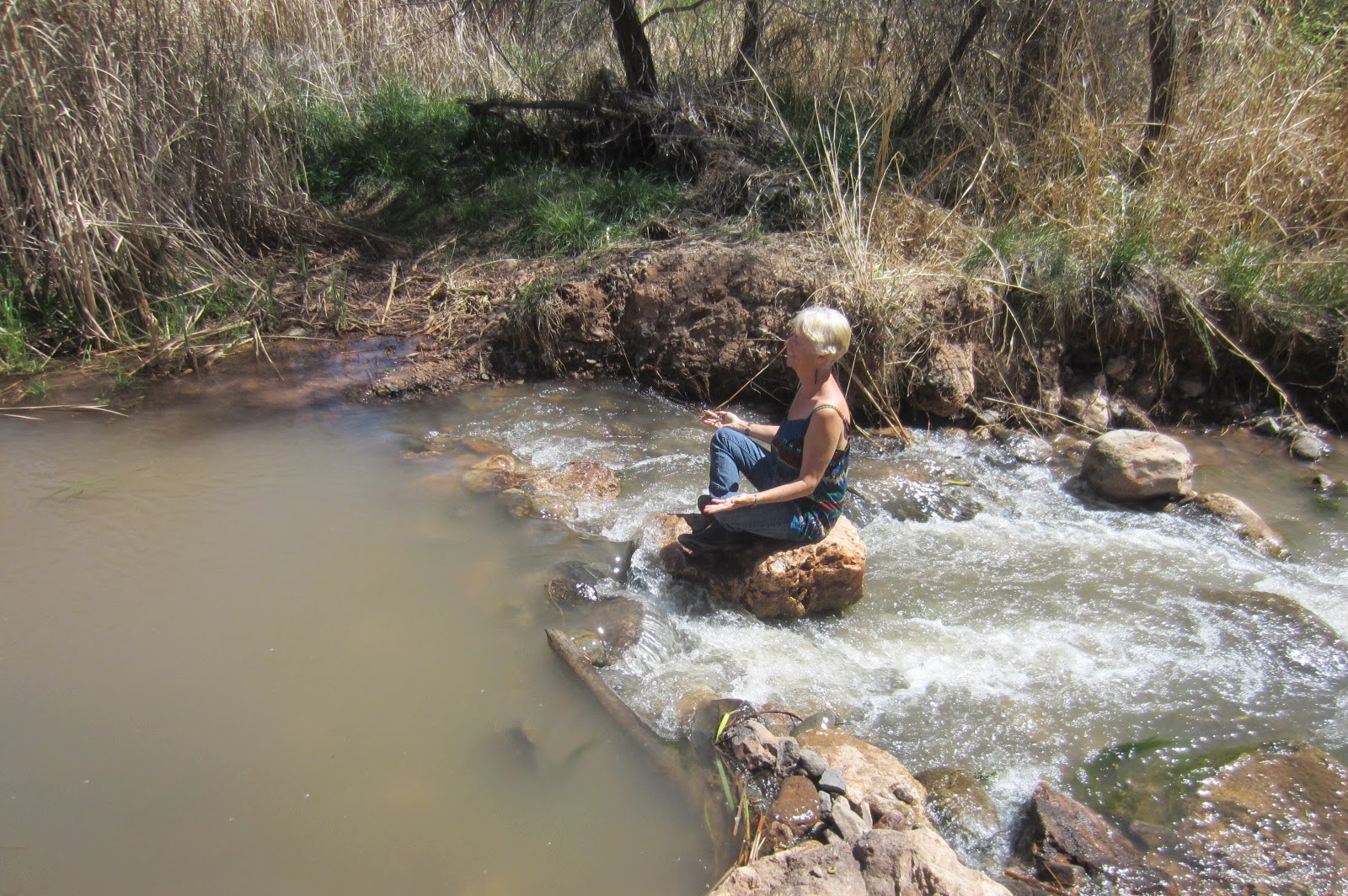 where she assumes the lotus position. 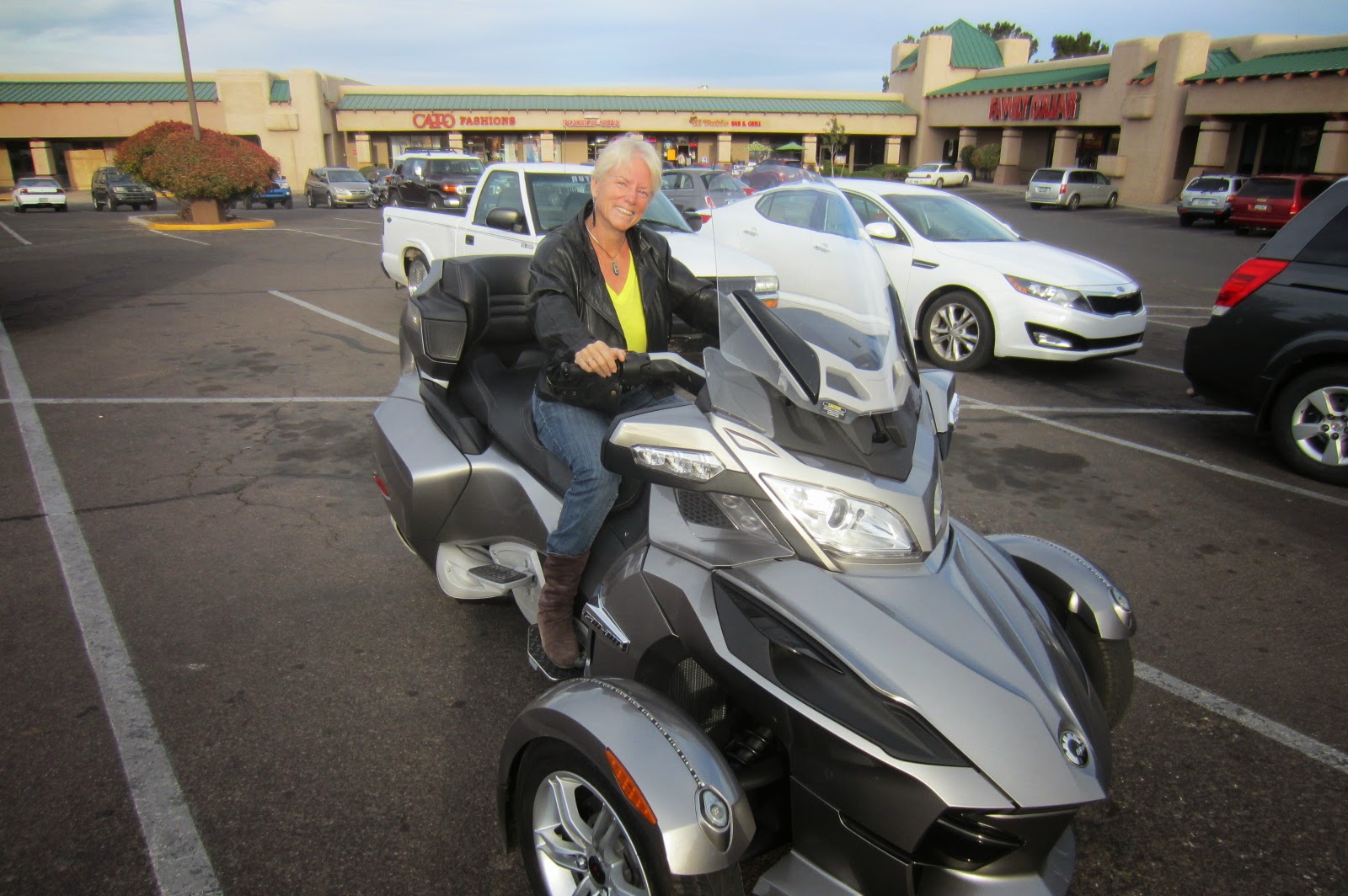 Takes me to Cottonwood--- Hams it up on a 200mph motorcycle 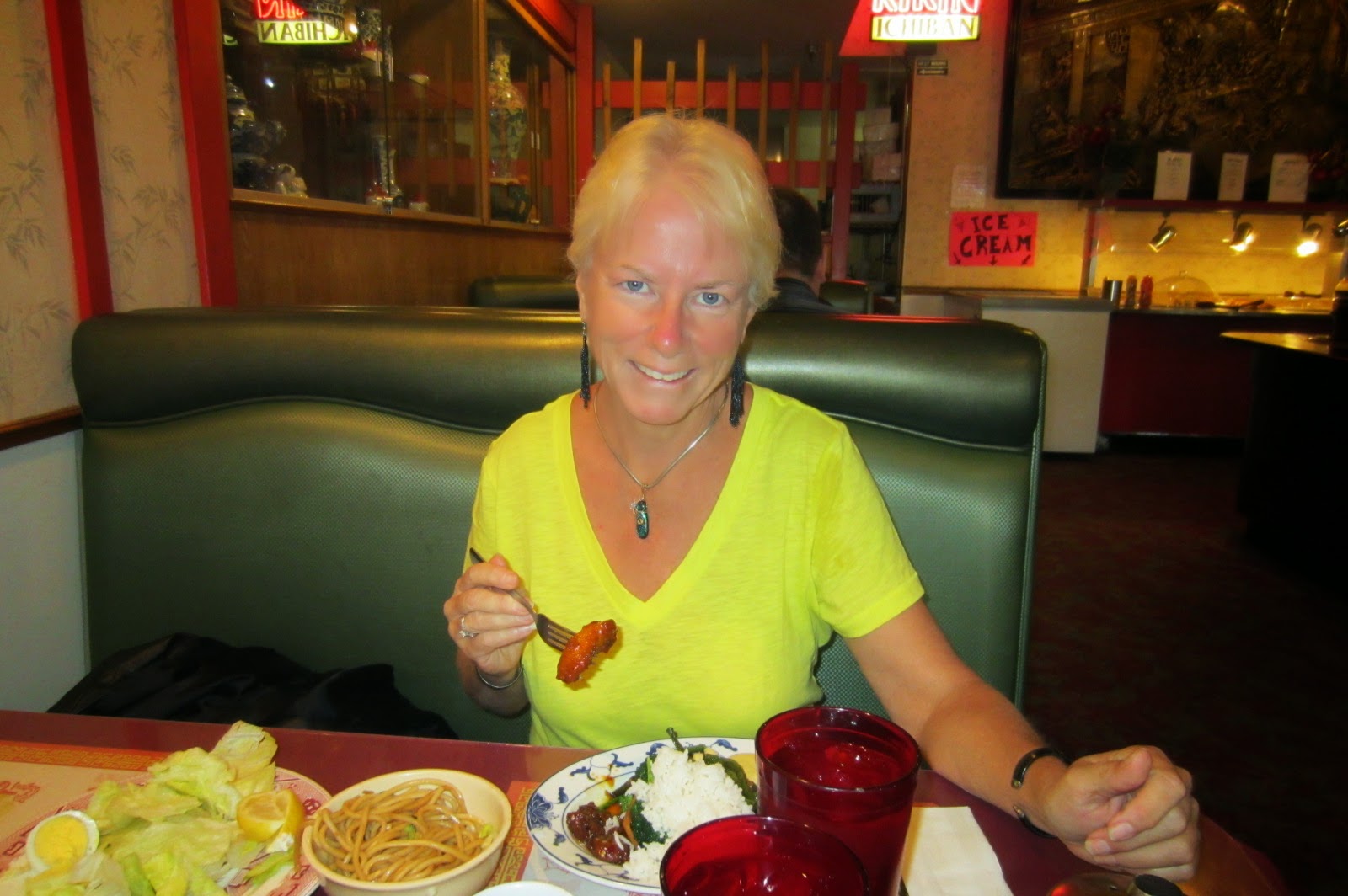 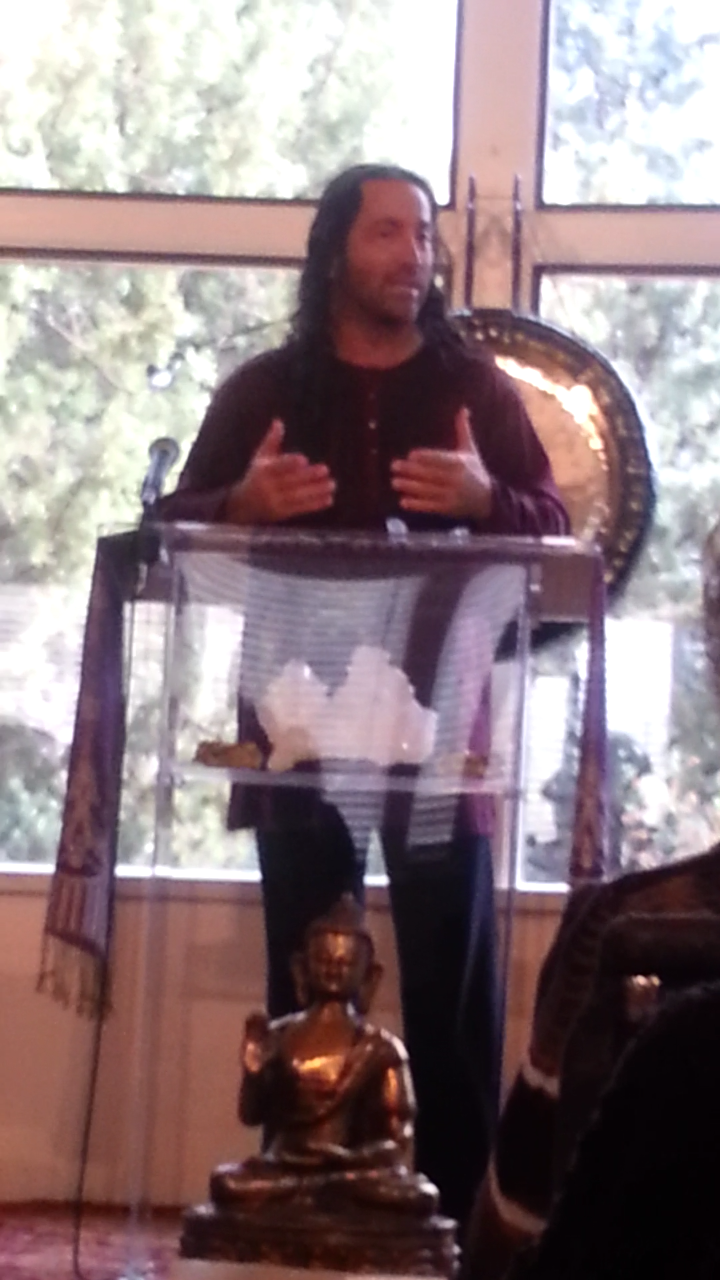 While Laurie has been in Sedona she has earned her Masters Degree in Reiki Healing and regularly attends the Reiki share at the Peace Place. She offers her 'Self Sufficient Reiki Healer' training classes in Sedona where she also offers "Reiki Love Gong Sound Healing Heart Expansion Sessions
and Life Purpose Attunements.

On Sunday she takes me to the Sedona Unity church where she has become a member and will next month be qualified to serve as a Chaplain.

I prepared myself to roll my eyes at superstitious chatter; But to my amazement this Jesus look-a-like Minister, Michael Mirdad, preached the best sermon I've ever heard. I left dazzled at the profundity of his insights. Emerson would have applauded.( it was a useful/spiritual talk about relationships--send for a copy--4/6/14-- click here you'll be dazzled too) 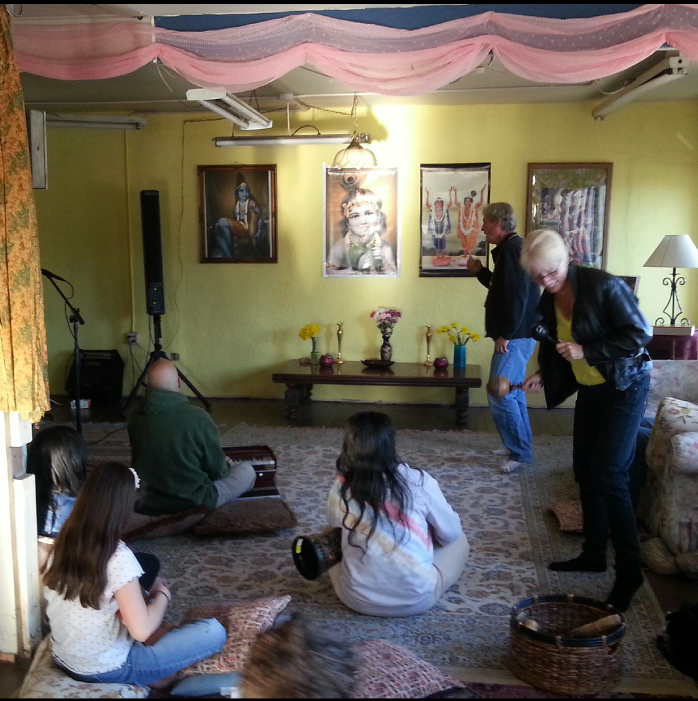 Then later she took me to a Hindu Kirtan-- where 30 devotees chanted for an hour  accompanied by loud music and drums and shakers and tamborines.  Laurie danced while playing the maracas! (A Kirtan is a session of "chanting the holy names to deepen your connection with Spirit") 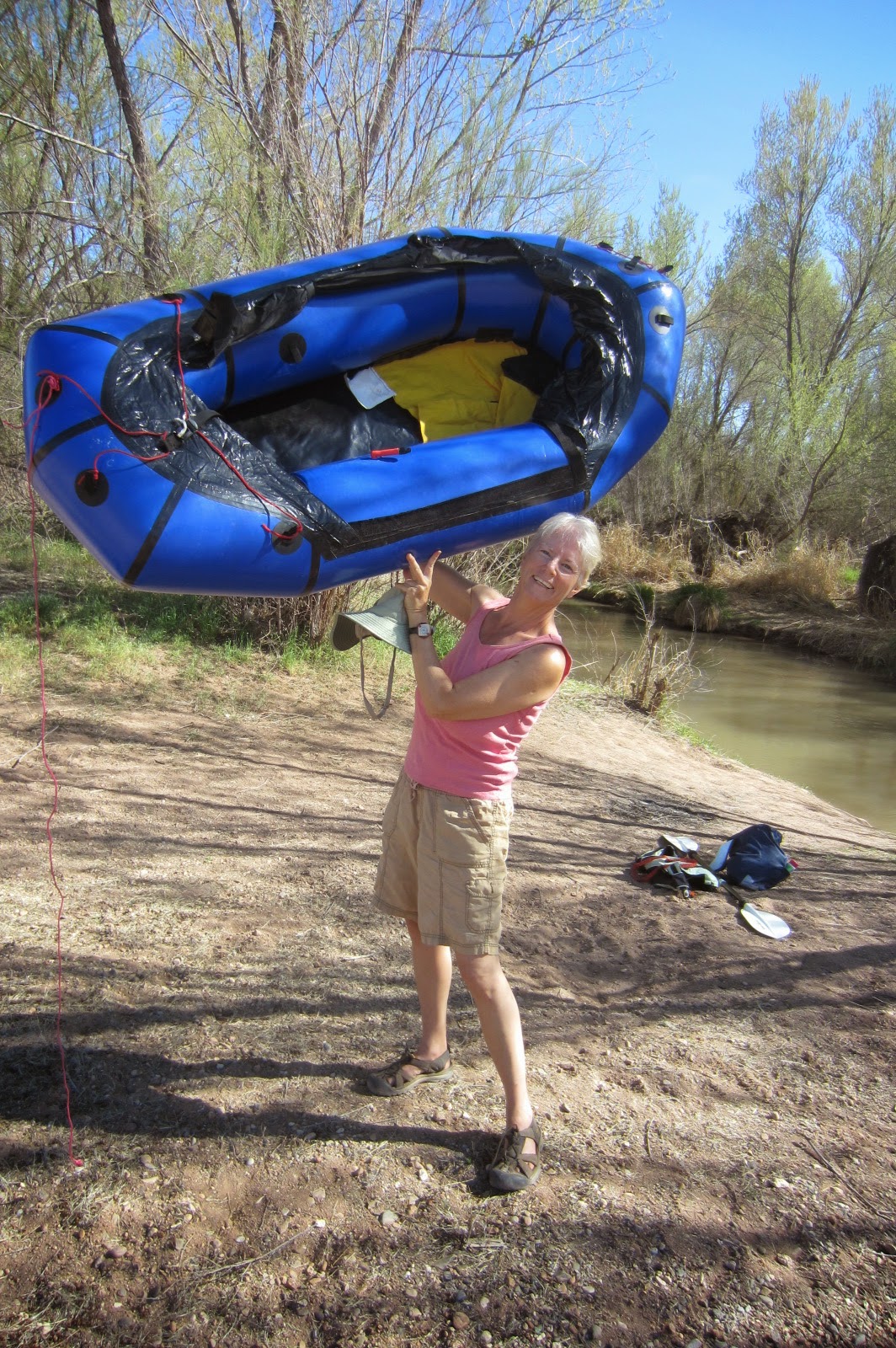 .
Yesterday I dropped her off a few miles up the Verde River for a run through it's rapids. She inflated this marvelous, super-lite raft and paddled off downstream on her expedition.  Didn't see her for an anxious 4 hours. 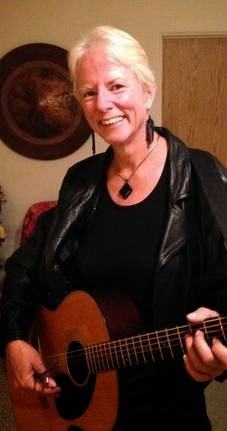 Giving an inspirational concert for
'A Course in Miracles' group in Sedona last week.

She also has been teaching people how to share their Heart Song by playing the Kokopelli Flute. If you can blow on a hot spoonful of soup and cool it off, in a one hr. class she can teach you how to play the Native American Flute. I know because even with no musical experience I learned how to play in one session!


Laurie seemingly feels at home everywhere---finds a way to participate--and make a difference.

RANDY PHILOSOPHIZES: If you were dropped off in a wholly new situation---could you make a life for yourself?  Find worthwhile friends?  Meaningful challenges? Enjoy life? Laurie does it all---with flair! I speculate that rich, adaptive personalities like hers are "grown" bit by bit as they playfully, courageously engage others----absorbing aspects of them that they admire----- and that is how a feedback loop of character growth is set in motion---- Rich personalities getting even richer.

I think Laurie has found her heart's home here!
Posted by Randy at 12:07 AM 5 comments: